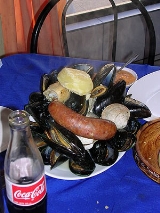 Encyclopedia
Curanto is a traditional food of Chiloé Archipelago
Chiloé Archipelago
Chiloé Archipelago consists of several islands lying off the coast of Chile. It is separated from mainland Chile by Chacao Channel in the north, the Sea of Chiloé in the east and Gulf of Corcovado to the southeast. All of the archipelago except Desertores Islands, which are part of Palena...
that has spread to the southern areas of Chile
Chile
Chile ,officially the Republic of Chile , is a country in South America occupying a long, narrow coastal strip between the Andes mountains to the east and the Pacific Ocean to the west. It borders Peru to the north, Bolivia to the northeast, Argentina to the east, and the Drake Passage in the far...
and recently Argentina
Argentina
Argentina , officially the Argentine Republic , is the second largest country in South America by land area, after Brazil. It is constituted as a federation of 23 provinces and an autonomous city, Buenos Aires...
. It is traditionally prepared in a hole, about a meter and a half (approx. one and a half yards) deep, which is dug in the ground. The bottom is covered with stones, heated in a bonfire until red.

The ingredients consist of shellfish
Shellfish
Shellfish is a culinary and fisheries term for exoskeleton-bearing aquatic invertebrates used as food, including various species of molluscs, crustaceans, and echinoderms. Although most kinds of shellfish are harvested from saltwater environments, some kinds are found only in freshwater...
, meat
Meat
Meat is animal flesh that is used as food. Most often, this means the skeletal muscle and associated fat and other tissues, but it may also describe other edible tissues such as organs and offal...
, potato
Potato
The potato is a starchy, tuberous crop from the perennial Solanum tuberosum of the Solanaceae family . The word potato may refer to the plant itself as well as the edible tuber. In the region of the Andes, there are some other closely related cultivated potato species...
es, milcaos (a kind of potato bread), chapalele
Chapalele
A chapalele is a Chilean dumpling made from boiled potatoes and wheat flour. They are especially prevalent among the cuisine of Chiloé....
s, and vegetables (sometimes including also specific types of fish
Fish
Fish are a paraphyletic group of organisms that consist of all gill-bearing aquatic vertebrate animals that lack limbs with digits. Included in this definition are the living hagfish, lampreys, and cartilaginous and bony fish, as well as various extinct related groups...
). The quantities are not fixed; the idea is that there should be a little of everything. Each layer of ingredients is covered with nalca (Chilean rhubarb) leaves, or in their absence, with fig
Ficus
Ficus is a genus of about 850 species of woody trees, shrubs, vines, epiphytes, and hemiepiphyte in the family Moraceae. Collectively known as fig trees or figs, they are native throughout the tropics with a few species extending into the semi-warm temperate zone. The Common Fig Ficus is a genus of...
leaves or white cabbage
Cabbage
Cabbage is a popular cultivar of the species Brassica oleracea Linne of the Family Brassicaceae and is a leafy green vegetable...
leaves. All this is covered with wet sacks, and then with dirt and grass chunks, creating the effect of a giant pressure cooker in which the food cooks for approximately one hour.

Curanto can also be prepared in a large stew pot that is heated over a bonfire or grill
Grill (cooking)
A barbecue grill is a device for cooking food by applying heat directly from below. There are several varieties of such grills, with most falling into one of two categories: gas-fueled and charcoal. There is a great debate over the merits of charcoal or gas for use as the cooking method between...
or in a pressure cooker. This stewed curanto is called pulmay in the central region of Chile
Chile
Chile ,officially the Republic of Chile , is a country in South America occupying a long, narrow coastal strip between the Andes mountains to the east and the Pacific Ocean to the west. It borders Peru to the north, Bolivia to the northeast, Argentina to the east, and the Drake Passage in the far...
.

It is believed that this form of preparing foods was native to the "chono" countryside and that, with the arrival of the southern peoples and the Spanish
Spain
Spain , officially the Kingdom of Spain languages]] under the European Charter for Regional or Minority Languages. In each of these, Spain's official name is as follows:;;;;;;), is a country and member state of the European Union located in southwestern Europe on the Iberian Peninsula...
conquistador
Conquistador
Conquistadors were Spanish soldiers, explorers, and adventurers who brought much of the Americas under the control of Spain in the 15th to 16th centuries, following Europe's discovery of the New World by Christopher Columbus in 1492...
s, new ingredients were added until it came to be the curanto that is known today. However, there are some who claim that the curanto is more evidence to suggest the theory that asserts that there was contact between America
Americas
The Americas, or America , are lands in the Western hemisphere, also known as the New World. In English, the plural form the Americas is often used to refer to the landmasses of North America and South America with their associated islands and regions, while the singular form America is primarily...
and Polynesia
Polynesia
Polynesia is a subregion of Oceania, made up of over 1,000 islands scattered over the central and southern Pacific Ocean. The indigenous people who inhabit the islands of Polynesia are termed Polynesians and they share many similar traits including language, culture and beliefs...
in the pre-Columbian
Pre-Columbian
The pre-Columbian era incorporates all period subdivisions in the history and prehistory of the Americas before the appearance of significant European influences on the American continents, spanning the time of the original settlement in the Upper Paleolithic period to European colonization during...
epoch, given that almost all Polynesian cultures have similar cooking methods known variously as "imu
IMU
IMU may refer to:*Inertial measurement unit*Initial markup*Interactive Member Universal*Interactive Marketing Unit*International Mathematical Union*International Medical University*Interurban Multiple Units used by Citytrain...
", "umu", "lovo", or "hangi
Hangi
Hāngi is a traditional New Zealand Māori method of cooking food using heated rocks buried in a pit oven still used for special occasions.To "lay a hāngi" or "put down a hāngi" involves digging a pit in the ground, heating stones in the pit with a large fire, placing baskets of food on top of the...
".