Encyclopedia
Cuprite is an oxide mineral
Oxide mineral
The oxide mineral class includes those minerals in which the oxide anion is bonded to one or more metal ions. The hydroxide bearing minerals are typically included in the oxide class...
composed of copper(I) oxide
Copper(I) oxide
Copper oxide or cuprous oxide is the inorganic compound with the formula Cu2O. It is one of the principal oxides of copper. This red-coloured solid is a component of some antifouling paints. The compound can appear either yellow or red, depending on the size of the particles, but both forms...
Cu2O, and is a minor ore
Ore
An ore is a type of rock that contains minerals with important elements including metals. The ores are extracted through mining; these are then refined to extract the valuable element....
of copper
Copper
Copper is a chemical element with the symbol Cu and atomic number 29. It is a ductile metal with very high thermal and electrical conductivity. Pure copper is soft and malleable; an exposed surface has a reddish-orange tarnish...
.

Its dark crystals with red internal reflections are in the isometric system hexoctahedral class, appearing as cubic, octahedral, or dodecahedral forms, or in combinations. Penetration twins
Crystal twinning
Crystal twinning occurs when two separate crystals share some of the same crystal lattice points in a symmetrical manner. The result is an intergrowth of two separate crystals in a variety of specific configurations. A twin boundary or composition surface separates the two crystals....
frequently occur. In spite of its nice color it is rarely used for jewelry because of its low Mohs hardness of 3.5 to 4. It has a relatively high specific gravity
Specific gravity
Specific gravity is the ratio of the density of a substance to the density of a reference substance. Apparent specific gravity is the ratio of the weight of a volume of the substance to the weight of an equal volume of the reference substance. The reference substance is nearly always water for...
of 6.1, imperfect cleavage and a brittle to conchoidal fracture. The luster is sub-metallic to brilliant adamantine. The "chalcotrichite" variety typically shows greatly elongated (parallel to [001]) capillary or needle like crystals forms. 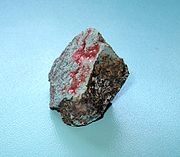 It is a secondary mineral which forms in the oxidized zone of copper sulfide deposits. It frequently occurs in association with native copper
Native copper
Copper, as native copper, is one of the few metallic elements to occur in uncombined form as a natural mineral, although most commonly occurs in oxidized states and mixed with other elements...
, azurite
Azurite
Azurite is a soft, deep blue copper mineral produced by weathering of copper ore deposits. It is also known as Chessylite after the type locality at Chessy-les-Mines near Lyon, France...
, chrysocolla
Chrysocolla
Chrysocolla is a hydrated copper silicate mineral with formula 2H2Si2O54·nH2O.-Properties:Chrysocolla has a blue-green color and is a minor ore of copper, having a hardness of 2.5 to 3.5.-Name and discovery:...
, malachite
Malachite
Malachite is a copper carbonate mineral, with the formula Cu2CO32. This green-colored mineral crystallizes in the monoclinic crystal system, and most often forms botryoidal, fibrous, or stalagmitic masses. Individual crystals are rare but do occur as slender to acicular prisms...
, tenorite
Tenorite
Tenorite is a copper oxide mineral with the simple formula CuO.-Occurrence:Tenorite occurs in the weathered or oxidized zone associated with deeper primary copper sulfide orebodies. Tenorite commonly occurs with chrysocolla and the copper carbonates, azurite and malachite. The dull grey-black color...
and a variety of iron oxide
Iron oxide
Iron oxides are chemical compounds composed of iron and oxygen. All together, there are sixteen known iron oxides and oxyhydroxides.Iron oxides and oxide-hydroxides are widespread in nature, play an important role in many geological and biological processes, and are widely utilized by humans, e.g.,...
minerals. It is known as ruby copper due to its distinctive red color.

Cuprite was first described in 1845 and the name derives from the Latin
Latin
Latin is an Italic language originally spoken in Latium and Ancient Rome. It, along with most European languages, is a descendant of the ancient Proto-Indo-European language. Although it is considered a dead language, a number of scholars and members of the Christian clergy speak it fluently, and...
cuprum for its copper content.


Cuprite as a gemstone

Though almost all crystals of cuprite are far too small to yield faceted gemstones
Gemstones
Gemstones is the third solo album by Adam Green, released in 2005. The album is characterised by the heavy presence of Wurlitzer piano, whereas its predecessor relied on a string section in its instrumentation.-Track listing:#Gemstones – 2:24...
, one unique deposit from Onganja, Southwest Africa, which was discovered in the 1970s, has produced crystals which were both large and gem quality. Virtually every faceted stone over one carat (200 mg) in weight is from this single deposit, which has long been mined out. The number of faceted gems over two carats (400 mg) is difficult to estimate, but according to Joel Arem, one-time curator for the Smithsonian National Gem and Mineral Collection in Washington DC, faceted cuprite of any size is considered one of the most collectible and spectacular gems in existence, with its deep garnet coloring and higher brilliance than a diamond. Only the gem's soft nature prevents it from being among the most valuable jewelry stones.
The source of this article is wikipedia, the free encyclopedia.  The text of this article is licensed under the GFDL.