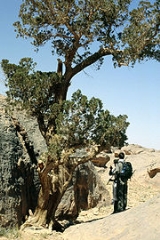 Encyclopedia
Cupressus dupreziana, the Saharan Cypress, is a very rare coniferous
Pinophyta
The conifers, division Pinophyta, also known as division Coniferophyta or Coniferae, are one of 13 or 14 division level taxa within the Kingdom Plantae. Pinophytes are gymnosperms. They are cone-bearing seed plants with vascular tissue; all extant conifers are woody plants, the great majority being...
tree
Tree
A tree is a perennial woody plant. It is most often defined as a woody plant that has many secondary branches supported clear of the ground on a single main stem or trunk with clear apical dominance. A minimum height specification at maturity is cited by some authors, varying from 3 m to...
native to the Tassili n'Ajjer
Tassili n'Ajjer
Tassili n'Ajjer is a mountain range in the Algerian section of the Sahara Desert. It is a vast plateau in south-east Algeria at the borders of Libya, Niger and Mali, covering an area of 72,000 sq...
mountains in the central Sahara Desert, southeast Algeria
Algeria
Algeria , officially the People's Democratic Republic of Algeria , also formally referred to as the Democratic and Popular Republic of Algeria, is a country in the Maghreb region of Northwest Africa with Algiers as its capital.In terms of land area, it is the largest country in Africa and the Arab...
, where it forms a unique population of trees hundreds of kilometres from any other trees. There are only 233 specimens of this critically endangered
Endangered species
An endangered species is a population of organisms which is at risk of becoming extinct because it is either few in numbers, or threatened by changing environmental or predation parameters...
species, the largest about 22 m tall. The majority are very old, estimated to be over 2000 years old, with very little regeneration due to the increasing desertification
Desertification
Desertification is the degradation of land in drylands. Caused by a variety of factors, such as climate change and human activities, desertification is one of the most significant global environmental problems.-Definitions:...
of the Sahara. Rainfall totals in the area are estimated to be about 30 mm annually. The largest one is named Tin-Balalan is believed to be the oldest tarout tress with a circumference of 12 meters or 36 feet.

This species is distinct from the allied Cupressus sempervirens
Cupressus sempervirens
Cupressus sempervirens, the Mediterranean Cypress is a species of cypress native to the eastern Mediterranean region, in northeast Libya, southeast Greece , southern Turkey, Cyprus, Northern Egypt, western Syria, Lebanon, Israel, Malta, Italy, western Jordan, and also a disjunct population in...
(Mediterranean Cypress) in its much bluer foliage with a white resin spot on each leaf
Leaf
A leaf is an organ of a vascular plant, as defined in botanical terms, and in particular in plant morphology. Foliage is a mass noun that refers to leaves as a feature of plants....
, the smaller shoots often being flattened in a single plane. It also has smaller cones
Conifer cone
A cone is an organ on plants in the division Pinophyta that contains the reproductive structures. The familiar woody cone is the female cone, which produces seeds. The male cones, which produce pollen, are usually herbaceous and much less conspicuous even at full maturity...
, only 1.5-2.5 cm long. Cupressus atlantica
Cupressus atlantica
Cupressus atlantica, the Moroccan Cypress, is a rare coniferous tree endemic to the valley of the Oued n'Fiss river in the High Atlas Mountains south of Marrakech in western Morocco...
(Moroccan Cypress) is more similar, and is treated as a variety of the Saharan Cypress (C. dupreziana var. atlantica) by some authors.

Probably as a result of its isolation and low population, the Saharan Cypress has evolved
Evolution
Evolution is any change across successive generations in the heritable characteristics of biological populations. Evolutionary processes give rise to diversity at every level of biological organisation, including species, individual organisms and molecules such as DNA and proteins.Life on Earth...
a unique reproductive system of male apomixis
Apomixis
In botany, apomixis was defined by Winkler as replacement of the normal sexual reproduction by asexual reproduction, without fertilization. This definition notably does not mention meiosis...
whereby the seed
Seed
A seed is a small embryonic plant enclosed in a covering called the seed coat, usually with some stored food. It is the product of the ripened ovule of gymnosperm and angiosperm plants which occurs after fertilization and some growth within the mother plant...
s develop entirely from the genetic content of the pollen
Pollen
Pollen is a fine to coarse powder containing the microgametophytes of seed plants, which produce the male gametes . Pollen grains have a hard coat that protects the sperm cells during the process of their movement from the stamens to the pistil of flowering plants or from the male cone to the...
. There is no genetic input from the female "parent", which only provides nutritional sustenance (Pichot et al., 2000). The Moroccan Cypress does not share this characteristic.

The Saharan Cypress is occasionally cultivated in southern and western Europe
Europe
Europe is, by convention, one of the world's seven continents. Comprising the westernmost peninsula of Eurasia, Europe is generally 'divided' from Asia to its east by the watershed divides of the Ural and Caucasus Mountains, the Ural River, the Caspian and Black Seas, and the waterways connecting...
, in part for ex situ genetic conservation, but also as an ornamental tree
Ornamental plant
Ornamental plants are plants that are grown for decorative purposes in gardens and landscape design projects, as house plants, for cut flowers and specimen display...
.