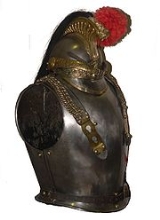 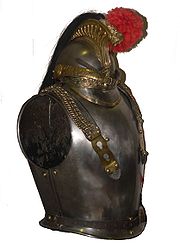 A cuirass is a piece of armour
Armour
Armour or armor is protective covering used to prevent damage from being inflicted to an object, individual or a vehicle through use of direct contact weapons or projectiles, usually during combat, or from damage caused by a potentially dangerous environment or action...
, formed of a single or multiple pieces of metal or other rigid material, which covers the front of the torso. In a suit of armour this important piece was generally connected to a back piece and cuirass could refer to the complete torso-protecting armour.

The musculature of the male torso
Torso
Trunk or torso is an anatomical term for the central part of the many animal bodies from which extend the neck and limbs. The trunk includes the thorax and abdomen.-Major organs:...
was idealized in Hellenistic
Hellenistic Greece
In the context of Ancient Greek art, architecture, and culture, Hellenistic Greece corresponds to the period between the death of Alexander the Great in 323 BC and the annexation of the classical Greek heartlands by Rome in 146 BC...
and Roman
Ancient Rome
Ancient Rome was a thriving civilization that grew on the Italian Peninsula as early as the 8th century BC. Located along the Mediterranean Sea and centered on the city of Rome, it expanded to one of the largest empires in the ancient world....
times in form of the muscle cuirass
Muscle cuirass
In classical antiquity, the muscle cuirass or heroic cuirass is a type of body armor cast to fit the wearer's torso and designed to mimic an idealized human physique. It first appears in late Archaic Greece and became widespread throughout the 5th– 4th centuries BC...
or "heroic cuirass" (in French the cuirass esthétique) sometimes further embellished with symbolic representation in relief, familiar in the Augustus of Prima Porta
Augustus of Prima Porta
Augustus of Prima Porta is a 2.04m high marble statue of Augustus Caesar which was discovered on April 20, 1863, in the Villa of Livia at Prima Porta, near Rome. Augustus Caesar's wife, Livia Drusilla, retired to the villa after his death. The sculpture is now displayed in the Braccio Nuovo of...
and other heroic representations in official Roman sculpture
Roman sculpture
The study of ancient Roman sculpture is complicated by its relation to Greek sculpture. Many examples of even the most famous Greek sculptures, such as the Apollo Belvedere and Barberini Faun, are known only from Roman Imperial or Hellenistic "copies." At one time, this imitation was taken by art...
. As parts of the actual military
Military
A military is an organization authorized by its greater society to use lethal force, usually including use of weapons, in defending its country by combating actual or perceived threats. The military may have additional functions of use to its greater society, such as advancing a political agenda e.g...
equipment of classic antiquity, cuirasses and corslets of bronze
Bronze
Bronze is a metal alloy consisting primarily of copper, usually with tin as the main additive. It is hard and brittle, and it was particularly significant in antiquity, so much so that the Bronze Age was named after the metal...
and iron
Iron
Iron is a chemical element with the symbol Fe and atomic number 26. It is a metal in the first transition series. It is the most common element forming the planet Earth as a whole, forming much of Earth's outer and inner core. It is the fourth most common element in the Earth's crust...
or some other rigid substance were habitually in use. While some special kind of secondary protection for the breast had been worn in earlier times by men-at-arms in addition to their mail hauberk
Hauberk
A hauberk is a shirt of chainmail. The term is usually used to describe a shirt reaching at least to mid-thigh and including sleeves. Haubergeon generally refers to a shorter variant with partial sleeves, but the terms are often used interchangeably.- History :The word hauberk is derived from the...
s and their coats armed with splints and studs. It was not until the 14th century that a plate armour became an established part of medieval armour.

The latter portions of the 14th century saw the cuirass gradually come into general use in connection with plate armour for the limbs until, at the close of the century, mail
Mail (armour)
Mail is a type of armour consisting of small metal rings linked together in a pattern to form a mesh.-History:Mail was a highly successful type of armour and was used by nearly every metalworking culture....
was phased out amongst the nobles (e.g., knight
Knight
A knight was a member of a class of lower nobility in the High Middle Ages.By the Late Middle Ages, the rank had become associated with the ideals of chivalry, a code of conduct for the perfect courtly Christian warrior....
s) except in the camail of the bascinet
Bascinet
The bascinet was a Medieval European open-faced military helmet, typically fitted with an aventail and hinged visor. The term is also written as bassinet or basinet.-Early versions:...
and at the edge of the hauberk
Hauberk
A hauberk is a shirt of chainmail. The term is usually used to describe a shirt reaching at least to mid-thigh and including sleeves. Haubergeon generally refers to a shorter variant with partial sleeves, but the terms are often used interchangeably.- History :The word hauberk is derived from the...
. The cuirass was almost universally worn covered throughout its lifespan as a form of armour. Thus, the globose form of the breast-armour of the Black Prince
Edward, the Black Prince
Edward of Woodstock, Prince of Wales, Duke of Cornwall, Prince of Aquitaine, KG was the eldest son of King Edward III of England and his wife Philippa of Hainault as well as father to King Richard II of England....
, in his effigy in Canterbury Cathedral
Canterbury Cathedral
Canterbury Cathedral in Canterbury, Kent, is one of the oldest and most famous Christian structures in England and forms part of a World Heritage Site....
, 1376, intimates that a cuirass (as well as a hauberk) is to be considered to have been covered by the royalty-emblazoned jupon of the prince.

The cuirass was always made long enough to rest on the hips. If it had been suspended by the shoulders, its weight would have likely exhausted (and chafed) its wearer. 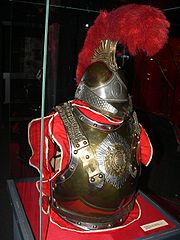 Early in the 15th century, plate armour, including the cuirass, began to be worn without any surcoat
Surcoat
A surcoat was an outer garment commonly worn in the Middle Ages by both men and women. It can either refer to a coat worn over other garments or the outer garment of a person...
; but in the concluding quarter of the century the short surcoat, with full short sleeves, known as the tabard
Tabard
A tabard is a short coat, either sleeveless, or with short sleeves or shoulder pieces, which was a common item of men's clothing in the Middle Ages, usually for outdoors. It might be belted, or not...
, was in general use over the armour. While the surcoat was being phased out, small plates of various forms and sizes (and not always made in pairs, i.e., the plate for the sword-arm often being smaller and lighter than its the one for the off-hand) were attached to the armour in front of the shoulders, to defend the otherwise vulnerable points where the plate defenses left a gap.

Corslets provided with both breast and back pieces were worn by foot-soldiers in the 17th century, while their mounted comrades were equipped in heavier and stronger cuirasses. These defenses continued in use longer than any other single piece of armour. Their use never altogether ceased and in modern armies mounted cuirassier
Cuirassier
Cuirassiers were mounted cavalry soldiers equipped with armour and firearms, first appearing in late 15th-century Europe. They were the successors of the medieval armoured knights...
s, armed as in earlier days with breast and back plates, have in some degree emulated the martial splendour of the body armour of the era of medieval chivalry
Chivalry
Chivalry is a term related to the medieval institution of knighthood which has an aristocratic military origin of individual training and service to others. Chivalry was also the term used to refer to a group of mounted men-at-arms as well as to martial valour...
. Both the French and German heavy cavalry
Cavalry
Cavalry or horsemen were soldiers or warriors who fought mounted on horseback. Cavalry were historically the third oldest and the most mobile of the combat arms...
wore cuirasses in parade leading up to World War I
World War I
World War I , which was predominantly called the World War or the Great War from its occurrence until 1939, and the First World War or World War I thereafter, was a major war centred in Europe that began on 28 July 1914 and lasted until 11 November 1918...
. In the early part of that conflict, they painted their cuirasses black and wore canvas protection covers over the neo-Roman style helmets.

Some years after the Waterloo
Battle of Waterloo
The Battle of Waterloo was fought on Sunday 18 June 1815 near Waterloo in present-day Belgium, then part of the United Kingdom of the Netherlands...
, certain historical cuirasses were taken from their repose in the Tower of London
Tower of London
Her Majesty's Royal Palace and Fortress, more commonly known as the Tower of London, is a historic castle on the north bank of the River Thames in central London, England. It lies within the London Borough of Tower Hamlets, separated from the eastern edge of the City of London by the open space...
and adapted for service by the Life Guards and the Horse Guards. For parade purposes, the Prussian Gardes du Corps and other corps wear cuirasses of richly decorated leather.

Cuirasses were manufactured in Japan as early as the 4th century.Tankō, worn by foot soldiers and keikō, worn by horsemen were both pre-samurai types of early Japanese cuirass constructed from iron plates connected by leather thongs. During the Heian period
Heian period
The is the last division of classical Japanese history, running from 794 to 1185. The period is named after the capital city of Heian-kyō, or modern Kyōto. It is the period in Japanese history when Buddhism, Taoism and other Chinese influences were at their height...
(794 to 1185) the Japanese cuirass evolved into the more familiar style worn by the samurai known as the dō or dou. Japanese armourers started to use leather (nerigawa) as a material and lacquer to weather proof the armor parts.

By the end of the Heian period the Japanese cuirass had arrived at the shape recognized as being distinctly samurai. Leather and or iron scales were used to construct samurai armours, with leather, and eventually silk lace (odoshi) used to connect the individual scales (kozane).
The introduction of firearms to Japan in 1543 soon led to a new type of cuirass being developed, solid iron plates replaced individual leather and iron scales as bullets replaced arrows and spears. The use of the samurai cuirass lasted until the 1860s when a national army using conventional uniforms was established.Samurai armour (and cuirasses) were last used in 1877 during the satsuma rebellion
Satsuma Rebellion
The was a revolt of Satsuma ex-samurai against the Meiji government from January 29 to September 24, 1877, 9 years into the Meiji Era. It was the last, and the most serious, of a series of armed uprisings against the new government.-Background:...
.