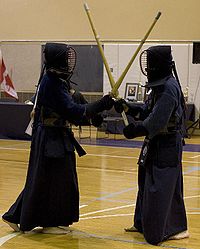 is training
Training
The term training refers to the acquisition of knowledge, skills, and competencies as a result of the teaching of vocational or practical skills and knowledge that relate to specific useful competencies. It forms the core of apprenticeships and provides the backbone of content at institutes of...
armour
Armour
Armour or armor is protective covering used to prevent damage from being inflicted to an object, individual or a vehicle through use of direct contact weapons or projectiles, usually during combat, or from damage caused by a potentially dangerous environment or action...
used primarily in the Japanese martial art
Japanese martial arts
Japanese martial arts refers to the enormous variety of martial arts native to Japan. At least three Japanese terms are often used interchangeably with the English phrase "Japanese martial arts": , literally meaning "martial way", , which has no perfect translation but means something like science,...
of kendo
Kendo
, meaning "Way of The Sword", is a modern Japanese martial art of sword-fighting based on traditional Japanese swordsmanship, or kenjutsu.Kendo is a physically and mentally challenging activity that combines strong martial arts values with sport-like physical elements.-Practitioners:Practitioners...
, with variants used for jukendo
Jukendo
is the Japanese martial art of bayonet fighting, and has been likened to kendo . Jukendo techniques are based on sojutsu or bayonet techniques from the 17th century, when firearms were introduced to Japan....
, naginatajutsu
Naginatajutsu
is the Japanese martial art of wielding the . This is a weapon resembling the medieval European glaive. Most naginatajutsu practiced today is in a modernized form, a gendai budō, in which competitions also are held.-Debated origins:...
, and sojutsu
Sojutsu
, meaning "art of the spear" is the Japanese martial art of fighting with the Japanese .-Origins:Although the spear had a profound role in early Japanese mythology, where the islands of Japan themselves were said to be created by salt water dripping from the tip of a spear, as a weapon the first...
. The name consists of two parts: bō meaning "protect" or "defend," and gu meaning "equipment" or "tool." A set of bogu has four components:: combined face mask and shoulder protectors (helmet);: hand and forearm protectors (gauntlets);: torso protector (breastplate);: groin and leg protectors (faulds).

A fifth component, (shin protectors, or greaves), are worn only by naginatajutsu practitioners.

The men protects the face, neck, and shoulders. It consists of a facemask with several horizontal metal bars running the entire width of the face, from the chin to the top of the head. To this is attached a long rectangular thick cloth padding that curves over the top of the head and extends to cover the shoulders. A throat protector is attached to the bottom of the facemask. The men is held in place with a pair of woven cords that wrap around the head and are tied at the back. The back of the men is left open for ventilation and the back of the head is unprotected. The target areas of the men are the centre top, and upper left and right sides for cutting strikes and the centre of the throat protector for a thrust.
The kote are mitten-like gloves. They were designed expressly for kendo.
While appearing to be cumbersome, enough mobility is allowed to grip the shinai
Shinai
is a weapon used for practice and competition in kendo representing a Japanese sword. Shinai are also used in other martial arts, but may be styled differently from kendo shinai, and represented with different characters....
in a comfortable, powerful, and firm way. Kote for naginatajutsu practitioners have a singulated index finger and thumb to better facilitate the rapid shifting of the hands along the length of the naginata's shaft. Naginata kote have a little less padding than those used for kendo. In the past, kote were often made with fully articulated fingers. This is rarely seen today as there can be a safety issue with snagged fingers. A special heavily padded design known as are used by some koryu
Koryu
is a Japanese word that is used in association with the ancient Japanese martial arts. This word literally translates as "old school" or "traditional school"...
, most notably Itto-ryu
Itto-ryu
, meaning "one-sword school", is the ancestor school of several Japanese Koryū kenjutsu styles, including Ono-ha, Mizoguchi-ha, Nakanishi-ha, Kogen, Hokushin, and Itto Shoden. The style was developed by Ittōsai Kagehisa.-Ono-ha Ittō-ryū:...
. The target area is the wrist portion of each kote.
The main component of the dō is the gently curving stomach and chest protector. The modern form has a pronounced bulge to help direct the force of strikes away from the soft areas in the middle of the torso. Lacquer
Lacquer
In a general sense, lacquer is a somewhat imprecise term for a clear or coloured varnish that dries by solvent evaporation and often a curing process as well that produces a hard, durable finish, in any sheen level from ultra matte to high gloss and that can be further polished as required...
ed bamboo is traditionally used although lacquered paper 'fibre' (frequently misidentified as fiberglass
Fiberglass
Glass fiber is a material consisting of numerous extremely fine fibers of glass.Glassmakers throughout history have experimented with glass fibers, but mass manufacture of glass fiber was only made possible with the invention of finer machine tooling...
) or moulded plastic are used for less expensive dō. The dō is supported from the shoulders by two diagonal ties and is restrained at the small of the back with another set of ties. The target areas of the dō are the two lower sides for a slashing cut to the stomach. The top half of the dō is a valid target for a thrust in naginata. In the past, this was also a valid target for a thrust in Kendo, but is no longer a permitted target.

The tare is a thick cloth belt that wraps around the waist and ties under the front flap in front of the groin. Sturdy cloth covered flaps hang from the belt to protect the upper legs and groin. The flaps run along half of the belt's length, which should be positioned over the front half of the body. The centre flap is usually covered with a name tag— or —that identifies the name of the wearer and the dojo
Dojo
A is a Japanese term which literally means "place of the way". Initially, dōjōs were adjunct to temples. The term can refer to a formal training place for any of the Japanese do arts but typically it is considered the formal gathering place for students of any Japanese martial arts style to...
or country he/she represents. There is no target point on tare, it is for protection against off-target and accidental strikes.