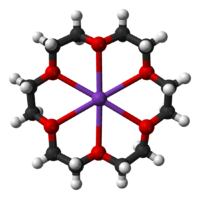 Crown ethers are cyclic chemical compound
Chemical compound
A chemical compound is a pure chemical substance consisting of two or more different chemical elements that can be separated into simpler substances by chemical reactions. Chemical compounds have a unique and defined chemical structure; they consist of a fixed ratio of atoms that are held together...
s that consist of a ring containing several ether
Ether
Ethers are a class of organic compounds that contain an ether group — an oxygen atom connected to two alkyl or aryl groups — of general formula R–O–R'. A typical example is the solvent and anesthetic diethyl ether, commonly referred to simply as "ether"...
groups. The most common crown ethers are oligomer
Oligomer
In chemistry, an oligomer is a molecule that consists of a few monomer units , in contrast to a polymer that, at least in principle, consists of an unlimited number of monomers. Dimers, trimers, and tetramers are oligomers. Many oils are oligomeric, such as liquid paraffin...
s of ethylene oxide
Ethylene oxide
Ethylene oxide, also called oxirane, is the organic compound with the formula . It is a cyclic ether. This means that it is composed of two alkyl groups attached to an oxygen atom in a cyclic shape . This colorless flammable gas with a faintly sweet odor is the simplest epoxide, a three-membered...
, the repeating unit being ethyleneoxy, i.e., -CH2CH2O-. Important members of this series are the tetramer (n = 4), the pentamer (n = 5), and the hexamer (n = 6). The term "crown" refers to the resemblance between the structure of a crown ether bound to a cation, and a crown
Crown (headgear)
A crown is the traditional symbolic form of headgear worn by a monarch or by a deity, for whom the crown traditionally represents power, legitimacy, immortality, righteousness, victory, triumph, resurrection, honour and glory of life after death. In art, the crown may be shown being offered to...
sitting on a person's head. The first number in a crown ether's name refers to the number of atoms in the cycle, and the second number refers to the number of those atoms that are oxygen
Oxygen
Oxygen is the element with atomic number 8 and represented by the symbol O. Its name derives from the Greek roots ὀξύς and -γενής , because at the time of naming, it was mistakenly thought that all acids required oxygen in their composition...
. Crown ethers are much broader than the oligomers of ethylene oxide; an important group are derived from catechol.

Crown ethers strongly bind certain cations, forming complexes
Complex (chemistry)
In chemistry, a coordination complex or metal complex, is an atom or ion , bonded to a surrounding array of molecules or anions, that are in turn known as ligands or complexing agents...
. The oxygen atoms are well situated to coordinate with a cation located at the interior of the ring, whereas the exterior of the ring is hydrophobic. The resulting cations often form salts that are soluble in nonpolar solvents, and for this reason crown ethers are useful in phase transfer catalysis. The denticity
Ligand
In coordination chemistry, a ligand is an ion or molecule that binds to a central metal atom to form a coordination complex. The bonding between metal and ligand generally involves formal donation of one or more of the ligand's electron pairs. The nature of metal-ligand bonding can range from...
of the polyether influences the affinity of the crown ether for various cations. For example, 18-crown-6 has high affinity for potassium cation, 15-crown-5 for sodium cation, and 12-crown-4 for lithium cation. The high affinity of 18-crown-6 for potassium ions contributes towards its toxicity.

Crown ethers are not the only macrocyclic ligands that have affinity for the potassium cation. Ionophore
Ionophore
An ionophore is a lipid-soluble molecule usually synthesized by microorganisms to transport ions across the lipid bilayer of the cell membrane...
s such as valinomycin
Valinomycin
Valinomycin is a dodecadepsipeptide antibiotic.Valinomycin is obtained from the cells of several Streptomyces strains, among which "S. tsusimaensis" and S. fulvissimus....
also display a marked preference for the potassium cation over other cations.

Apart from its high affinity for potassium cations, 18-crown-6
18-Crown-6
18-Crown-6 is an organic compound with the formula [C2H4O]6 and the IUPAC name of 1,4,7,10,13,16-hexaoxacyclooctadecane. The compound is a crown ether. Crown ethers coordinate some metal cations in their central cavity; 18-crown-6 displays a particular affinity for potassium cations. The synthesis...
can also bind to protonated amines and form very stable complexes in both solution and the gas phase. Some amino acids, such as lysine
Lysine
Lysine is an α-amino acid with the chemical formula HO2CCH4NH2. It is an essential amino acid, which means that the human body cannot synthesize it. Its codons are AAA and AAG....
, contain a primary amine
Amine
Amines are organic compounds and functional groups that contain a basic nitrogen atom with a lone pair. Amines are derivatives of ammonia, wherein one or more hydrogen atoms have been replaced by a substituent such as an alkyl or aryl group. Important amines include amino acids, biogenic amines,...
on their side chains. Those protonated amino groups can bind to the cavity of 18-crown-6 and form stable complexes in the gas phase. Hydrogen-bonds are formed between the three hydrogen atoms of protonated amines and three oxygen atoms of 18-crown-6. These hydrogen-bonds make the complex a stable adduct.

21- and 18-membered diazacrown ether derivatives exhibit excellent calcium
Calcium
Calcium is the chemical element with the symbol Ca and atomic number 20. It has an atomic mass of 40.078 amu. Calcium is a soft gray alkaline earth metal, and is the fifth-most-abundant element by mass in the Earth's crust...
and magnesium
Magnesium
Magnesium is a chemical element with the symbol Mg, atomic number 12, and common oxidation number +2. It is an alkaline earth metal and the eighth most abundant element in the Earth's crust and ninth in the known universe as a whole...
selectivities and are widely used in ion-selective electrodes. Some or all of the oxygen atoms in crown ethers can be replaced by nitrogens to form cryptand
Cryptand
Cryptands are a family of synthetic bi- and polycyclic multidentate ligands for a variety of cations. The Nobel Prize for Chemistry in 1987 was given to Donald J. Cram, Jean-Marie Lehn, and Charles J. Pedersen for their efforts in discovering and determining uses of cryptands and crown ethers,...
s. A well-known tetrazacrown is cyclen
Cyclen
Cyclen or 1,4,7,10-tetraazacyclododecane is a macrocycle and the aza analogue of the crown ether 12-crown-4. Derivatives of cyclen are larger cyclic polyamines but the repeating unit is always the same. Like crown ethers, cyclen compounds are capable of selectively binding cations...
in which there are no oxygens.