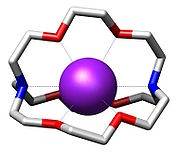 Cryptands are a family of synthetic bi- and polycyclic multidentate ligand
Ligand
In coordination chemistry, a ligand is an ion or molecule that binds to a central metal atom to form a coordination complex. The bonding between metal and ligand generally involves formal donation of one or more of the ligand's electron pairs. The nature of metal-ligand bonding can range from...
s for a variety of cations. The Nobel Prize for Chemistry in 1987 was given to Donald J. Cram
Donald J. Cram
Donald James Cram was an American chemist who shared the 1987 Nobel Prize in Chemistry with Jean-Marie Lehn and Charles J...
, Jean-Marie Lehn
Jean-Marie Lehn
Jean-Marie Lehn is a French chemist. He received the Nobel Prize together with Donald Cram and Charles Pedersen in 1987 for his work in Chemistry, particularly his synthesis of the cryptands...
, and Charles J. Pedersen
Charles J. Pedersen
Charles John Pedersen was an American organic chemist best known for describing methods of synthesizing crown ethers. He shared the Nobel Prize in Chemistry in 1987 with Donald J. Cram and Jean-Marie Lehn...
for their efforts in discovering and determining uses of cryptands and crown ethers, thus launching the now flourishing field of supramolecular chemistry
Supramolecular chemistry
Supramolecular chemistry refers to the area of chemistry beyond the molecules and focuses on the chemical systems made up of a discrete number of assembled molecular subunits or components...
. The term cryptand implies that this ligand binds substrates in a crypt
Crypt
In architecture, a crypt is a stone chamber or vault beneath the floor of a burial vault possibly containing sarcophagi, coffins or relics....
, interring the guest as in a burial. These molecules are three dimensional analogues of crown ether
Crown ether
Crown ethers are cyclic chemical compounds that consist of a ring containing several ether groups. The most common crown ethers are oligomers of ethylene oxide, the repeating unit being ethyleneoxy, i.e., -CH2CH2O-. Important members of this series are the tetramer , the pentamer , and the hexamer...
s but are more selective and complex the guest ions more strongly. The resulting complexes are lipophilic.

The most common and most important cryptand is N[CH2CH2OCH2CH2OCH2CH2]3N; the formal IUPAC (International Union of Pure and Applied Chemistry) name for this compound is 1,10-diaza-4,7,13,16,21,24-hexaoxabicyclo[8.8.8]hexacosane. This compound is termed [2.2.2]cryptand
2.2.2-Cryptand
2,2,2-Cryptand is one of the most important members of the cryptand family of chelating agents.In Nomenclature of Inorganic Chemistry , IUPAC recommends the abbreviation "crypt-222"....
where the numbers indicate the number of ether oxygen atoms (and hence binding sites) in each of the three bridges between the amine nitrogen "caps". Many cryptands are commercially available under the tradename "Kryptofix." All-amine cryptands exhibit particularly high affinity for alkali metal cations, which has allowed the isolation of salts of K-.

The 3-dimensional interior cavity of a cryptand provides a binding site - or nook - for "guest" ions. The complex between the cationic guest and the cryptand is called a cryptate. Cryptands form complexes with many "hard cations" including NH4+, lanthanoids, alkali
Alkali
In chemistry, an alkali is a basic, ionic salt of an alkali metal or alkaline earth metal element. Some authors also define an alkali as a base that dissolves in water. A solution of a soluble base has a pH greater than 7. The adjective alkaline is commonly used in English as a synonym for base,...
metals, and alkaline earth metals. In contrast to crown ethers, cryptands bind the guest ions using both nitrogen
Nitrogen
Nitrogen is a chemical element that has the symbol N, atomic number of 7 and atomic mass 14.00674 u. Elemental nitrogen is a colorless, odorless, tasteless, and mostly inert diatomic gas at standard conditions, constituting 78.08% by volume of Earth's atmosphere...
and oxygen
Oxygen
Oxygen is the element with atomic number 8 and represented by the symbol O. Its name derives from the Greek roots ὀξύς and -γενής , because at the time of naming, it was mistakenly thought that all acids required oxygen in their composition...
donors. This three-dimensional encapsulation mode confers some size-selectivity, enabling discrimination among alkali metal cations (e.g. Na+ vs. K+).

Cryptands are more expensive and difficult to prepare, but offer much better selectivity and strength of binding than other complexants for alkali metals, such as crown ether
Crown ether
Crown ethers are cyclic chemical compounds that consist of a ring containing several ether groups. The most common crown ethers are oligomers of ethylene oxide, the repeating unit being ethyleneoxy, i.e., -CH2CH2O-. Important members of this series are the tetramer , the pentamer , and the hexamer...
s. They are able to bind otherwise insoluble salts into organic solvents. They can also be used as phase transfer catalyst
Phase transfer catalyst
In chemistry, a phase transfer catalyst or PTC is a catalyst that facilitates the migration of a reactant from one phase into another phase where reaction occurs. Phase transfer catalysis is a special form of heterogeneous catalysis. Ionic reactants are often soluble in an aqueous phase but...
s by transferring ions from one phase to another. Cryptands enabled the synthesis of the alkalide
Alkalide
An alkalide is a chemical compound in which alkali metals are anions . Such species are notable because alkali metals were previously thought to appear in salts only as cations...
s and electride
Electride
An electride is an ionic compound in which an electron is the anion. The first electrides to be studied in depth were solutions of alkali metals in ammonia. When sodium metal dissolves in ammonia, the result is a blue solution consisting of [Na6]+ and solvated electrons. Such solutions are powerful...
s. They have also been used in the crystallization of Zintl ions such as Sn94−.
The source of this article is wikipedia, the free encyclopedia.  The text of this article is licensed under the GFDL.