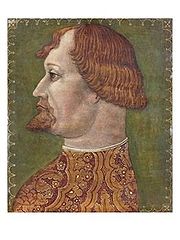 Gian Galeazzo Visconti son of Galeazzo II Visconti
Galeazzo II Visconti
-External links:*...
and Bianca of Savoy
Bianca of Savoy
Bianca of Savoy was the only surviving daughter of Aimone, Count of Savoy and his wife Yolande Palaeologina of Montferrat...
, was the first Duke of Milan
Duchy of Milan
The Duchy of Milan , was created on the 1st of may 1395, when Gian Galeazzo Visconti, Lord of Milan, purchased a diploma for 100,000 Florins from King Wenceslaus. It was this diploma that installed, Gian Galeazzo as Duke of Milan and Count of Pavia...
(1395) and ruled the late-medieval city just before the dawn of the Renaissance
Renaissance
The Renaissance was a cultural movement that spanned roughly the 14th to the 17th century, beginning in Italy in the Late Middle Ages and later spreading to the rest of Europe. The term is also used more loosely to refer to the historical era, but since the changes of the Renaissance were not...
. He was the great founding patron of the Certosa di Pavia
Certosa di Pavia
The Certosa di Pavia Gra-Car , Shrine of the Blessed Virgin Mary Mother of Grace, is a monastery and complex in Lombardy, northern Italy, situated near a small town of the same name in the Province of Pavia, 8 km north of Pavia...
, completing the Visconti Castle
Visconti Castle
Castle Visconteo is a castle built in the town of Pavia, Lombardy, northern Italy. It was built by Galeazzo II Visconti in 1360, soon after the taking of the city, a free city-state until then. The credited architect is Bartolino da Novara. The castle used to be the main residence of the Visconti...
at Pavia
Pavia
Pavia , the ancient Ticinum, is a town and comune of south-western Lombardy, northern Italy, 35 km south of Milan on the lower Ticino river near its confluence with the Po. It is the capital of the province of Pavia. It has a population of c. 71,000...
begun by his father and furthering work on the Duomo of Milan.

During his patronage of the Visconti Castle he contributed greatly to the growth of the collection of scientific treatises and richly illuminated manuscripts in the Visconti Library. 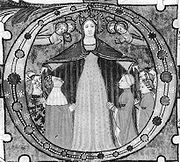 Although most famous as Signore of Milan, Gian Galeazzo was the son of Galeazzo II Visconti who possessed the signoria
Signoria
A Signoria was an abstract noun meaning 'government; governing authority; de facto sovereignty; lordship in many of the Italian city states during the medieval and renaissance periods....
of the city of Pavia. In 1385 Gian Galeazzo gained control of Milan by overthrowing his uncle Bernabò
Bernabo Visconti
Bernabò Visconti was an Italian soldier and statesman, who was Lord of Milan.-Life:He was born in Milan, the son of Stefano Visconti and Valentina Doria. From 1346 to 1349 he lived in exile, until he was called back by his uncle Giovanni Visconti...
through treacherous means. He imprisoned his uncle who soon died, supposedly poisoned on his orders.

Galeazzo's role as a statesman also took other forms. Soon after seizing Milan he took Verona, Vicenza
Vicenza
Vicenza , a city in north-eastern Italy, is the capital of the eponymous province in the Veneto region, at the northern base of the Monte Berico, straddling the Bacchiglione...
, and Padua
Padua
Padua is a city and comune in the Veneto, northern Italy. It is the capital of the province of Padua and the economic and communications hub of the area. Padua's population is 212,500 . The city is sometimes included, with Venice and Treviso, in the Padua-Treviso-Venice Metropolitan Area, having...
, establishing himself as Signore of each, and soon controlled almost the entire valley of the Po
Po River
The Po |Ligurian]]: Bodincus or Bodencus) is a river that flows either or – considering the length of the Maira, a right bank tributary – eastward across northern Italy, from a spring seeping from a stony hillside at Pian del Re, a flat place at the head of the Val Po under the northwest face...
. He lost Padua in 1390, when it reverted to Francesco Novello da Carrara. He received the title of Duke of Milan from Wenceslaus, King of the Romans
Wenceslaus, King of the Romans
Wenceslaus ) was, by election, German King from 1376 and, by inheritance, King of Bohemia from 1378. He was the third Bohemian and second German monarch of the Luxembourg dynasty...
in 1395 for 100,000 florins.

In 1400, Gian Galeazzo appointed a host of clerks and departments entrusted with improving the public health. For the new system of administration and bookkeeping this established, he is credited with creating the first modern bureaucracy.

Gian Galeazzo had dreams of uniting all of northern Italy into one kingdom,a revived Lombard empire. The obstacles to his success included Bologna
Bologna
Bologna is the capital city of Emilia-Romagna, in the Po Valley of Northern Italy. The city lies between the Po River and the Apennine Mountains, more specifically, between the Reno River and the Savena River. Bologna is a lively and cosmopolitan Italian college city, with spectacular history,...
and especially Florence. In 1402 Gian Galeazzo launched assaults upon these cities. The warfare was extremely costly on both sides, but it was universally believed the Milanese would emerge victorious. The Florentine leaders, especially the chancellor Coluccio Salutati
Coluccio Salutati
Coluccio Salutati was an Italian Humanist and man of letters, and one of the most important political and cultural leaders of Renaissance Florence.-Birth and Early Career:...
worked successfully to rally the people of Florence, but the Florentines were being taxed hard by famine, disease, and poverty. Galeazzo won another victory over the Bolognese at the Battle of Casalecchio
Battle of Casalecchio
The Battle of Casalecchio took place on 26 June 1402 near the town of Casalecchio di Reno, near Bologna. At this battle, a Bolognese army under Giovanni I Bentivoglio opposed Gian Galeazzo Visconti, Duke of Milan, and his allies, the Malatesta of Rimini and the Gonzaga of Mantua...
on 26 June 1402.

Galeazzo's dreams were to come to naught, however, as he succumbed to a fever at the castello of Melegnano in 10 August 1402. He died on 3 September. His empire fragmented as infighting among his successors wracked Milan, partly through his division of his lands among both legitimate and illegitimate heirs.

Gian Galeazzo spent 300,000 golden florins in attempting to turn from their courses the Mincio from Mantua and the Brenta from Padua
Padua
Padua is a city and comune in the Veneto, northern Italy. It is the capital of the province of Padua and the economic and communications hub of the area. Padua's population is 212,500 . The city is sometimes included, with Venice and Treviso, in the Padua-Treviso-Venice Metropolitan Area, having...
, in order to render those cities helpless before the force of his arms. His library, housed in the grandest princely dwelling in Italy, the castello in Pavia, and his rich collection of manuscripts, many of them the fruits of his conquests, were famous.


of
Duchy of Milan