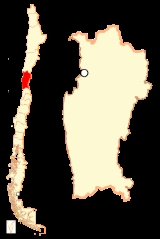 Encyclopedia
The IV Coquimbo Region is one of Chile
Chile
Chile ,officially the Republic of Chile , is a country in South America occupying a long, narrow coastal strip between the Andes mountains to the east and the Pacific Ocean to the west. It borders Peru to the north, Bolivia to the northeast, Argentina to the east, and the Drake Passage in the far...
's 15 first order administrative division
Administrative division
An administrative division, subnational entity, or country subdivision is a portion of a country or other political division, established for the purpose of government. Administrative divisions are each granted a certain degree of autonomy, and are required to manage themselves through their own...
s. It is some 400 km north of the capital, Santiago
Santiago, Chile
Santiago , also known as Santiago de Chile, is the capital and largest city of Chile, and the center of its largest conurbation . It is located in the country's central valley, at an elevation of above mean sea level...
.

The capital and largest city is La Serena, other important cities include the seaport Coquimbo
Coquimbo
Coquimbo is a port city, commune and capital of the Elqui Province, located on the Pan-American Highway, in the Coquimbo Region of Chile. Coquimbo lies in a valley south of La Serena, with which it forms Greater La Serena with more than 400,000 inhabitants. The commune spans an area around the...
and the agricultural centre. Ovalle
Ovalle, Chile
Ovalle is a city in the Coquimbo Region of Chile, founded in 1831 as a settlement of more than 113,000 people. The name Ovalle was chosen to honor to Chile's vice-president José Tomás Ovalle...
.

The Coquimbo Region forms the narrowest part, or 'waist' of Chile, and is hence one of the country's more mountainous regions, as the Andes
Andes
The Andes is the world's longest continental mountain range. It is a continual range of highlands along the western coast of South America. This range is about long, about to wide , and of an average height of about .Along its length, the Andes is split into several ranges, which are separated...
range runs closer to the sea than elsewhere. The region has notable marine species as well as taxa that are associated with the mountainous regions. With respect to marine organisms, the upwelling areas encourage bioproductivity off of this Pacific Coast area of Chile.

In the southern mountainous areas of the Coquimbo Region, the rare and endangered Chilean Wine Palm is found, whose habitat is threatened by human overpopulation
Overpopulation
Overpopulation is a condition where an organism's numbers exceed the carrying capacity of its habitat. The term often refers to the relationship between the human population and its environment, the Earth...
in the region and associated deforestation
Deforestation
Deforestation is the removal of a forest or stand of trees where the land is thereafter converted to a nonforest use. Examples of deforestation include conversion of forestland to farms, ranches, or urban use....
for residential expansion and agriculture.

The Elqui Valley is home to a number of astronomical observatories, owing to the region's clear skies. It is also home to a 600-meter-long dam, the Puclaro, which confines the Elqui River
Elqui River
The Elqui River starts in the west Andes, flowing into the Pacific Ocean, crossing the Chilean city of La Serena, is a wine and pisco producing area...
and produces a reservoir of some seven km in length.

Mining and agricultural activities account for the location of various places in the region, around the transverse valleys and mineral deposits. Originally this organization was structured according to the location of Indian villages of the Diaguita
Diaguita
The Diaguita, also called Diaguita-Calchaquí, are a group of South American indigenous peoples. The Diaguita culture developed between the 8th and 16th centuries in what are now the provinces of Salta, Catamarca, La Rioja and Tucumán in northwestern Argentina, and in the Atacama and Coquimbo...
s. A high percentage (70-75%) of inhabitants are of Mestizo
Mestizo
Mestizo is a term traditionally used in Latin America, Philippines and Spain for people of mixed European and Native American heritage or descent...
(Euro-Amerindian) background, higher than any other region in Chile. Other indigenous peoples include the Aymara, Atacameno
Atacameño
The Atacameños are a Native American people who inhabited the Andean portion of the Atacama Desert, mainly in what is today Chile's Antofagasta Region. Their language is known as Kunza....
, Mapuche
Mapuche
The Mapuche are a group of indigenous inhabitants of south-central Chile and southwestern Argentina. They constitute a wide-ranging ethnicity composed of various groups who shared a common social, religious and economic structure, as well as a common linguistic heritage. Their influence extended...
and Quechua whom were immigrants themselves from Peru
Peru
Peru , officially the Republic of Peru , is a country in western South America. It is bordered on the north by Ecuador and Colombia, on the east by Brazil, on the southeast by Bolivia, on the south by Chile, and on the west by the Pacific Ocean....
and Bolivia
Bolivia
Bolivia officially known as Plurinational State of Bolivia , is a landlocked country in central South America. It is the poorest country in South America...
.

Some substantial immigration from Europe (a good number were Basques and Andalusians from Spain
Spain
Spain , officially the Kingdom of Spain languages]] under the European Charter for Regional or Minority Languages. In each of these, Spain's official name is as follows:;;;;;;), is a country and member state of the European Union located in southwestern Europe on the Iberian Peninsula...
, with Croats
Croats
Croats are a South Slavic ethnic group mostly living in Croatia, Bosnia and Herzegovina and nearby countries. There are around 4 million Croats living inside Croatia and up to 4.5 million throughout the rest of the world. Responding to political, social and economic pressure, many Croats have...
, Greeks
Greeks
The Greeks, also known as the Hellenes , are a nation and ethnic group native to Greece, Cyprus and neighboring regions. They also form a significant diaspora, with Greek communities established around the world....
, Italians, and of Occitan-French
French people
The French are a nation that share a common French culture and speak the French language as a mother tongue. Historically, the French population are descended from peoples of Celtic, Latin and Germanic origin, and are today a mixture of several ethnic groups...
and Galician
Galician people
The Galicians are an ethnic group, a nationality whose historical homeland is Galicia in north-western Spain. Most Galicians are bilingual, speaking both their historic language, Galician, and Castilian Spanish.-Political and administrative divisions:...
/Portuguese
Portuguese people
The Portuguese are a nation and ethnic group native to the country of Portugal, in the west of the Iberian peninsula of south-west Europe. Their language is Portuguese, and Roman Catholicism is the predominant religion....
descent), the Middle East (esp. Palestinians), other Latin American nations, North Americans (about tens of thousands claimed Cherokee
Cherokee
The Cherokee are a Native American people historically settled in the Southeastern United States . Linguistically, they are part of the Iroquoian language family...
ancestry from displaced persons from Indian Territory
Indian Territory
The Indian Territory, also known as the Indian Territories and the Indian Country, was land set aside within the United States for the settlement of American Indians...
in the USA in the 1880s) and East Asians (mostly Chinese
Chinese people
The term Chinese people may refer to any of the following:*People with Han Chinese ethnicity ....
and Koreans) taken place in the Coquimbo region. In the late 19th and 20th century, a mass migration of Chileans from the Central Valley of Chile transformed the once culturally isolated and rural agrarian part of the country to fulfilled economic development goals.

This region is a very popular travel destination. Visitors are mainly attracted to its long beaches, many of fine white sand, bathed by a calm sea, and the region’s pleasant climate.

Along with tourism, the province's main industries are agriculture and fishing.

The Los Pelambres copper mine, near Salamanca
Salamanca, Chile
Salamanca is a Chilean city and commune in Choapa Province, Coquimbo Region. It is located east of Illapel, the province's administrative center, and north of Santiago, Chile...
in Choapa is one of the largest in the world with some 2,100 million tonnes of reserves.

The first newspaper
Newspaper
A newspaper is a scheduled publication containing news of current events, informative articles, diverse features and advertising. It usually is printed on relatively inexpensive, low-grade paper such as newsprint. By 2007, there were 6580 daily newspapers in the world selling 395 million copies a...
published in this region was El Minero de Coquimbo in 1828. In La Serena is published the newspaper El Día (founded on April 1, 1944) and the Weekly Tiempo (founded on 13 November 1993), while in the Coquimbo is printed La Región
La Región
La Región is a daily newspaper in the city and province of Ourense, in the Southeastern part of Galicia, an autonomous community of Spain. Founded in 1910, most of its stock still belongs to the founding Outeiriño family...
(founded on April 13, 2004 ) and the newspaper El Ovallino in Ovalle (founded on October 15, 1989).

In television TVN
Televisión Nacional de Chile
TVN is Chile's state-owned television station. Its inaugural transmission took place on 1969. TVN is owned, but not funded, by the state, and it functions independently from it; a very particular case of public television in South America...
Red Coquimbo began on June 28, 1993, news segments broadcast signal within the country. Then conduct small programs with reports in the local accent.

In Ovalle, the council passed on UHF channel 63 of the Cable Color Ovalle TV, originally called "Cultura Televisión." This channel will broadcast news and documentaries from Limarí.

And have now ceased to exist several regional signals as Telenorte
Telenorte
Telenorte was an Chilean Television network launched in 1966 and closed in 2001. The network had stations in Arica, Iquique, Antofagasta and La Serena.-History:...
launched in the 1960s
1960s
The 1960s was the decade that started on January 1, 1960, and ended on December 31, 1969. It was the seventh decade of the 20th century.The 1960s term also refers to an era more often called The Sixties, denoting the complex of inter-related cultural and political trends across the globe...
, and had a studio in La Serena in 1993, which ended in 1998. The signal issued from Arica continued until 2001, when it was closed forever.
Another regional channel, now gone, was the Canal 8 UCV TV
Canal 8 UCV TV
Canal 8 UCV TV was a Chilean Television Channel which only operated in the Coquimbo Region between 1974 and 2002.-Beginnings:The channel started in 1971 as a relay for UCV TV...
. Identified as a local affiliate signal UCV TV
UCV TV
Corporación de Televisión de la Pontificia Universidad Católica de Valparaíso, UCV TV, is the oldest TV channel of Chile. Founded in 1957 , it currently airs in Santiago on channel 5. Its headquarters are in Viña del Mar, Chile where it broadcasts on channel 4 VHF. Also it owns VHF stations in La...
, received support from the Valparaíso
Valparaíso
Valparaíso is a city and commune of Chile, center of its third largest conurbation and one of the country's most important seaports and an increasing cultural center in the Southwest Pacific hemisphere. The city is the capital of the Valparaíso Province and the Valparaíso Region...
station and, with great technical support, made soap operas and other shows. This channel in 1994 changed to signal the signal 9, until in 2002 finally closed its doors, leaving the memory of more than 25 years of history of local communications.

In La Serena and Coquimbo are captured the following TV signals open: