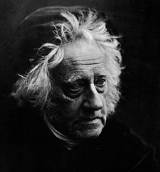 Overview
Sir John Frederick William Herschel, 1st Baronet KH
Royal Guelphic Order
The Royal Guelphic Order, sometimes also referred to as the Hanoverian Guelphic Order, is a Hanoverian order of chivalry instituted on 28 April 1815 by the Prince Regent . It has not been conferred by the British Crown since the death of King William IV in 1837, when the personal union of the...
, FRS (7 March 1792 – 11 May 1871),
was an English
England
England is a country that is part of the United Kingdom. It shares land borders with Scotland to the north and Wales to the west; the Irish Sea is to the north west, the Celtic Sea to the south west, with the North Sea to the east and the English Channel to the south separating it from continental...
mathematician
Mathematician
A mathematician is a person whose primary area of study is the field of mathematics. Mathematicians are concerned with quantity, structure, space, and change....
, astronomer
Astronomer
An astronomer is a scientist who studies celestial bodies such as planets, stars and galaxies.Historically, astronomy was more concerned with the classification and description of phenomena in the sky, while astrophysics attempted to explain these phenomena and the differences between them using...
, chemist
Chemist
A chemist is a scientist trained in the study of chemistry. Chemists study the composition of matter and its properties such as density and acidity. Chemists carefully describe the properties they study in terms of quantities, with detail on the level of molecules and their component atoms...
, and experimental photographer/inventor, who in some years also did valuable botanical work. He was the son of Mary Baldwin and astronomer Sir Friedrich Wilhelm Herschel
William Herschel
Sir Frederick William Herschel, KH, FRS, German: Friedrich Wilhelm Herschel was a German-born British astronomer, technical expert, and composer. Born in Hanover, Wilhelm first followed his father into the Military Band of Hanover, but emigrated to Britain at age 19...
and the father of 12 children.

Herschel originated the use of the Julian day
Julian day
Julian day is used in the Julian date system of time measurement for scientific use by the astronomy community, presenting the interval of time in days and fractions of a day since January 1, 4713 BC Greenwich noon...
system in astronomy
Astronomy
Astronomy is a natural science that deals with the study of celestial objects and phenomena that originate outside the atmosphere of Earth...
.

Self-respect is the cornerstone of all virtue.

Man is constituted as a speculative being; he contemplates the world, and the objects around him, not with a passive indifferent eye, but as a system disposed with order and design.

To the natural philosopher there is no natural object unimportant or trifling.

Accustomed to trace the operation of general causes, and the exemplification of general laws, in circumstances where the uninformed and unenquiring eye perceives neither novelty nor beauty, he walks in the midst of wonders.

Statement about the "natural philosopher", or scientist.

We must never forget that it is principles not phenomena, — laws, not insulated, independent facts, which are the object and the inquiry of the natural philosopher.