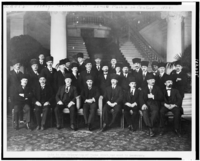 The Conference of Lausanne was a conference held in Lausanne
Lausanne
Lausanne is a city in Romandy, the French-speaking part of Switzerland, and is the capital of the canton of Vaud. The seat of the district of Lausanne, the city is situated on the shores of Lake Geneva . It faces the French town of Évian-les-Bains, with the Jura mountains to its north-west...
, Switzerland
Switzerland
Switzerland name of one of the Swiss cantons. ; ; ; or ), in its full name the Swiss Confederation , is a federal republic consisting of 26 cantons, with Bern as the seat of the federal authorities. The country is situated in Western Europe,Or Central Europe depending on the definition....
during 1922 and 1923. Its purpose was the negotiation of a treaty
Treaty
A treaty is an express agreement under international law entered into by actors in international law, namely sovereign states and international organizations. A treaty may also be known as an agreement, protocol, covenant, convention or exchange of letters, among other terms...
to replace the Treaty of Sèvres
Treaty of Sèvres
The Treaty of Sèvres was the peace treaty between the Ottoman Empire and Allies at the end of World War I. The Treaty of Versailles was signed with Germany before this treaty to annul the German concessions including the economic rights and enterprises. Also, France, Great Britain and Italy...
, which, under the new government of Kemal Pasha
Mustafa Kemal Atatürk
Mustafa Kemal Atatürk was an Ottoman and Turkish army officer, revolutionary statesman, writer, and the first President of Turkey. He is credited with being the founder of the Republic of Turkey....
, was no longer recognised by Turkey
Turkey
Turkey , known officially as the Republic of Turkey , is a Eurasian country located in Western Asia and in East Thrace in Southeastern Europe...
.

The conference opened in November 1922, with representatives from the United Kingdom
United Kingdom
The United Kingdom of Great Britain and Northern IrelandIn the United Kingdom and Dependencies, other languages have been officially recognised as legitimate autochthonous languages under the European Charter for Regional or Minority Languages...
, France
France
The French Republic , The French Republic , The French Republic , (commonly known as France , is a unitary semi-presidential republic in Western Europe with several overseas territories and islands located on other continents and in the Indian, Pacific, and Atlantic oceans. Metropolitan France...
, Italy
Italy
Italy , officially the Italian Republic languages]] under the European Charter for Regional or Minority Languages. In each of these, Italy's official name is as follows:;;;;;;;;), is a unitary parliamentary republic in South-Central Europe. To the north it borders France, Switzerland, Austria and...
and Turkey. The Grand National Assembly of Turkey
Grand National Assembly of Turkey
The Grand National Assembly of Turkey , usually referred to simply as the Meclis , is the unicameral Turkish legislature. It is the sole body given the legislative prerogatives by the Turkish Constitution. It was founded in Ankara on 23 April 1920 in the midst of the Turkish War of Independence...
selected İsmet İnönü
Ismet Inönü
Mustafa İsmet İnönü was a Turkish Army General, Prime Minister and the second President of Turkey. In 1938, the Republican People's Party gave him the title of "Milli Şef" .-Family and early life:...
, Dr Rıza Nur
Riza Nur
Riza Nur was a Turkish surgeon, politician and writer.-Early years:After graduating from the Military Medical School in 1901 Riza Nur went on to work as a surgeon at Gülhane Military Hospital before returning to the Military Medical School as an academic in 1907...
and Chief Rabbi Nahum as their representatives. Lord Curzon, the British Foreign Secretary, was the co-ordinator of the conference and dominated it. France and Italy had assumed that, following the Chanak Crisis
Chanak Crisis
The Chanak Crisis, also called Chanak Affair in September 1922 was the threatened attack by Turkish troops on British and French troops stationed near Çanakkale to guard the Dardanelles neutral zone. The Turkish troops had recently defeated Greek forces and recaptured İzmir...
, British prestige with Turkey would be irrevocably damaged; they were shocked to discover that Turkish respect for Britain was undiminished, since British troops had held their positions at Chanak while the French had been ordered to withdraw.

The conference lasted for eleven weeks. It heard speeches from Benito Mussolini
Benito Mussolini
Benito Amilcare Andrea Mussolini was an Italian politician who led the National Fascist Party and is credited with being one of the key figures in the creation of Fascism....
of Italy and Raymond Poincaré
Raymond Poincaré
Raymond Poincaré was a French statesman who served as Prime Minister of France on five separate occasions and as President of France from 1913 to 1920. Poincaré was a conservative leader primarily committed to political and social stability...
of France. The proceedings of the conference were notable for the stubborn diplomacy of İnönü. Already partially deaf, İnönü would simply turn off his hearing aid
Hearing aid
A hearing aid is an electroacoustic device which typically fits in or behind the wearer's ear, and is designed to amplify and modulate sound for the wearer. Earlier devices, known as "ear trumpets" or "ear horns", were passive funnel-like amplification cones designed to gather sound energy and...
when Curzon launched into lengthy speeches denouncing the Turkish position. Once Curzon was finished, İnönü would restate his original demands, oblivious to Curzon's denunciations. At the conclusion, Turkey assented to the political clauses and the "freedom of the straits
Dardanelles
The Dardanelles , formerly known as the Hellespont, is a narrow strait in northwestern Turkey connecting the Aegean Sea to the Sea of Marmara. It is one of the Turkish Straits, along with its counterpart the Bosphorus. It is located at approximately...
", which was Britain's main concern. The matter of the status of Mosul
Mosul
Mosul , is a city in northern Iraq and the capital of the Ninawa Governorate, some northwest of Baghdad. The original city stands on the west bank of the Tigris River, opposite the ancient Assyrian city of Nineveh on the east bank, but the metropolitan area has now grown to encompass substantial...
was deferred, since Curzon refused to be budged on the British position that the area was part of Iraq
Iraq
Iraq ; officially the Republic of Iraq is a country in Western Asia spanning most of the northwestern end of the Zagros mountain range, the eastern part of the Syrian Desert and the northern part of the Arabian Desert....
. The French delegation, however, did not achieve any of their goals and on 30 January 1923 issued a statement that they did not consider the draft treaty to be any more than a "basis of discussion". The Turks therefore refused to sign the treaty. On 4 February 1923, Curzon made a final appeal to Ismet Pasha to sign, and when he refused the Foreign Secretary broke off negotiations and left that night on the Orient Express
Orient Express
The Orient Express is the name of a long-distance passenger train service originally operated by the Compagnie Internationale des Wagons-Lits. It ran from 1883 to 2009 and is not to be confused with the Venice-Simplon Orient Express train service, which continues to run.The route and rolling stock...
.