Encyclopedia
Condor is the name for two species
Species
In biology, a species is one of the basic units of biological classification and a taxonomic rank. A species is often defined as a group of organisms capable of interbreeding and producing fertile offspring. While in many cases this definition is adequate, more precise or differing measures are...
of New World vulture
New World vulture
The New World Vulture or Condor family Cathartidae contains seven species in fivegenera, all but one of which are monotypic. It includes five vultures and two condors found in warm and temperate areas of the Americas....
s, each in a monotypic
Monotypic
In biology, a monotypic taxon is a taxonomic group with only one biological type. The term's usage differs slightly between botany and zoology. The term monotypic has a separate use in conservation biology, monotypic habitat, regarding species habitat conversion eliminating biodiversity and...
genus
Genus
In biology, a genus is a low-level taxonomic rank used in the biological classification of living and fossil organisms, which is an example of definition by genus and differentia...
. They are the largest flying land birds in the Western Hemisphere
Western Hemisphere
The Western Hemisphere or western hemisphere is mainly used as a geographical term for the half of the Earth that lies west of the Prime Meridian and east of the Antimeridian , the other half being called the Eastern Hemisphere.In this sense, the western hemisphere consists of the western portions...
.

Condors are part of the family Cathartidae, whereas the 15 species of Old World vultures are in the family Accipitridae, that also includes falcons, hawks, and eagles. The New World and Old World vultures evolved from different ancestors. However, they both are carrion
Carrion
Carrion refers to the carcass of a dead animal. Carrion is an important food source for large carnivores and omnivores in most ecosystems. Examples of carrion-eaters include vultures, hawks, eagles, hyenas, Virginia Opossum, Tasmanian Devils, coyotes, Komodo dragons, and burying beetles...
-eaters and have distinctive bare heads. 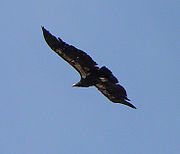 Both condors are very large broad-winged soaring birds, the Andean Condor being 5 cm shorter (beak to tail) on average than the northern species, but larger in wingspan. California Condors are the largest flying land birds in North America. The Andean Condor is second only to the Wandering Albatross
Wandering Albatross
The Wandering Albatross, Snowy Albatross or White-winged Albatross, Diomedea exulans, is a large seabird from the family Diomedeidae, which has a circumpolar range in the Southern Ocean. It was the first species of albatross to be described, and was long considered the same species as the Tristan...
(up to 3.5 m) in terms of wingspan among all living flying birds.

The adult plumage
Plumage
Plumage refers both to the layer of feathers that cover a bird and the pattern, colour, and arrangement of those feathers. The pattern and colours of plumage vary between species and subspecies and can also vary between different age classes, sexes, and season. Within species there can also be a...
is uniformly black, with the exception of a frill of white feathers nearly surrounding the base of the neck and are meticulously kept clean by the bird. As an adaptation for hygiene, the condor's head and neck have few feathers, which exposes the skin to the sterilizing effects of dehydration and solar ultraviolet light at high altitudes. The head is much flattened above. In the male it is crowned with a caruncle or comb, while the skin of the neck in the male lies in folds, forming a wattle. The skin of the head and neck is capable of flushing noticeably in response to emotional state, which serves to communicate between individuals.

The middle toe is greatly elongated, and the hinder one but slightly developed, while the talons of all the toes are comparatively straight and blunt. The feet are thus more adapted to walking as in their relatives the storks, and of little use as weapons or organs of prehension as in birds of prey and Old World vultures. The female, contrary to the usual rule among birds of prey
Bird of prey
Birds of prey are birds that hunt for food primarily on the wing, using their keen senses, especially vision. They are defined as birds that primarily hunt vertebrates, including other birds. Their talons and beaks tend to be relatively large, powerful and adapted for tearing and/or piercing flesh....
, is smaller than the male.

California Condors' wingspan measures up to 2.9 m (9.5 ft), and they can weigh up to 10.4 kg (22.9 lb). The skin on the necks will vary in color, depending on the age of the birds. Adult birds' skin color can range from cream, pink, yellow, or even orange during breeding season. 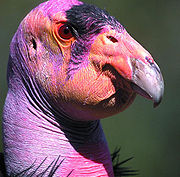 Fossils from the Pleistocene era have been found in various parts of North America, including New York and Florida, leading scientists to believe that California Condors or their ancestors once lived on the west coast of North America as well as all the way to the eastern coast. Some scientists also believe that an ancient relative of the condor, Argentavis magnificens from South America, may have been the largest flying bird ever with a wingspan of 7 metres (23 ft). 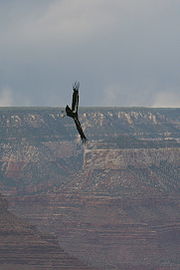 The young are covered with a grayish down until they are almost as large as their parents. They are able to fly after six months, but continue to roost and hunt with their parents until age two, when they are displaced by a new clutch. There is a well-developed social structure within large groups of condors, with competition to determine a 'pecking order' by body language, competitive play behavior, and a wide variety of vocalizations, even though the condor has no voice box.

On the wing the movements of the condor, as it wheels in circles, are remarkably graceful. The lack of a large sternum to anchor correspondingly large flight muscles identifies it physiologically as a primary soarer. The birds flap their wings on rising from the ground, but after attaining a moderate elevation they seem to sail on the air.

Wild condors inhabit large territories, often traveling 250 km (155.3 mi) a day in search of carrion. They prefer large carcasses such as deer or cattle which they spot by looking for other scavengers, which cannot rip through the tougher hides of these larger animals with the efficiency of the larger condor. In the wild they are intermittent eaters, often going for a few days without eating, then gorging themselves on several kilograms at once, sometimes to the point of being unable to lift off the ground.

The Moche
Moche
'The Moche civilization flourished in northern Peru from about 100 AD to 800 AD, during the Regional Development Epoch. While this issue is the subject of some debate, many scholars contend that the Moche were not politically organized as a monolithic empire or state...
people of ancient Peru
Peru
Peru , officially the Republic of Peru , is a country in western South America. It is bordered on the north by Ecuador and Colombia, on the east by Brazil, on the southeast by Bolivia, on the south by Chile, and on the west by the Pacific Ocean....
worshiped nature. They placed emphasis on animals and often depicted condors in their art.
The same is true of the later Inca civilizations: the condor represented sky as one of the three celebrated animals.

California Condors are intertwined in many Native American cultures. There are people who believe California Condors were the origin of the Thunderbird
Thunderbird (mythology)
The Thunderbird is a legendary creature in certain North American indigenous peoples' history and culture. It is considered a "supernatural" bird of power and strength...
myth, while some Western tribes regarded the California Condors as sacred beings, using feathers in religious ceremonies. The Chumash tribe believes that if the condors become completely extinct, so will the tribe.