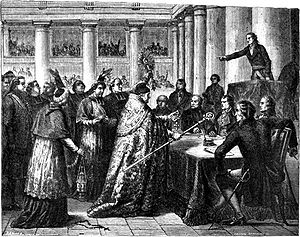 The Concordat of 1801 was an agreement between Napoleon and Pope Pius VII
Pope Pius VII
Pope Pius VII , born Barnaba Niccolò Maria Luigi Chiaramonti, was a monk, theologian and bishop, who reigned as Pope from 14 March 1800 to 20 August 1823.-Early life:...
, signed on 15 July 1801. It solidified the Roman Catholic Church as the majority church of France and brought back most of its civil status.

During the French Revolution
French Revolution
The French Revolution , sometimes distinguished as the 'Great French Revolution' , was a period of radical social and political upheaval in France and Europe. The absolute monarchy that had ruled France for centuries collapsed in three years...
, the National Assembly
National Assembly (French Revolution)
During the French Revolution, the National Assembly , which existed from June 17 to July 9, 1789, was a transitional body between the Estates-General and the National Constituent Assembly.-Background:...
had taken Church properties and issued the Civil Constitution of the Clergy
Civil Constitution of the Clergy
The Civil Constitution of the Clergy was a law passed on 12 July 1790 during the French Revolution, that subordinated the Roman Catholic Church in France to the French government....
, which made the Church a department of the State, removing it from the authority of the Pope
Pope
The Pope is the Bishop of Rome, a position that makes him the leader of the worldwide Catholic Church . In the Catholic Church, the Pope is regarded as the successor of Saint Peter, the Apostle...
. This caused hostility among the Vendeans towards the change in the relationship between the Catholic Church and the French government. Subsequent laws abolished the traditional Gregorian calendar
Gregorian calendar
The Gregorian calendar, also known as the Western calendar, or Christian calendar, is the internationally accepted civil calendar. It was introduced by Pope Gregory XIII, after whom the calendar was named, by a decree signed on 24 February 1582, a papal bull known by its opening words Inter...
and Christian holidays.

While the Concordat restored some ties to the papacy, it was largely in favor of the state; the balance of church-state relations had tilted firmly in Napoleon's favour. Now, he could win favor with the Catholics within France while also controlling Rome in a political sense. Napoleon once told his brother Lucien in April 1801, "Skillful conquerors have not got entangled with priests. They can both contain them and use them." As a part of the Concordat, he presented another set of laws called the Organic Articles
Organic Articles
The Organic Articles was the name of a law administering public worship in France.- History :The Articles were originally presented by Napoléon Bonaparte, and consisted of 77 Articles relating to Catholicism and 44 Articles relating to Protestantism...
.

The Concordat was abrogated by the law of 1905
1905 French law on the separation of Church and State
The 1905 French law on the Separation of the Churches and State was passed by the Chamber of Deputies on 9 December 1905. Enacted during the Third Republic, it established state secularism in France...
on the separation of church and state
Separation of church and state
The concept of the separation of church and state refers to the distance in the relationship between organized religion and the nation state....
. However, some terms of the Concordat are still in effect in the Alsace-Lorraine
Alsace-Lorraine
The Imperial Territory of Alsace-Lorraine was a territory created by the German Empire in 1871 after it annexed most of Alsace and the Moselle region of Lorraine following its victory in the Franco-Prussian War. The Alsatian part lay in the Rhine Valley on the west bank of the Rhine River and east...
region under the local law of Alsace-Moselle, as the region was controlled by the German Empire
German Empire
The German Empire refers to Germany during the "Second Reich" period from the unification of Germany and proclamation of Wilhelm I as German Emperor on 18 January 1871, to 1918, when it became a federal republic after defeat in World War I and the abdication of the Emperor, Wilhelm II.The German...
at the time of the law's passage.