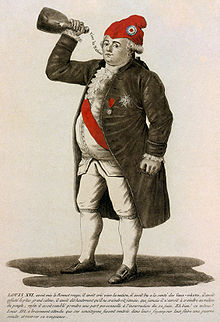 Estates-General
Estates-General of 1789
The Estates-General of 1789 was the first meeting since 1614 of the French Estates-General, a general assembly representing the French estates of the realm: the nobility, the Church, and the common people...
had been called May 5th 1789 to deal with France
France
The French Republic , The French Republic , The French Republic , (commonly known as France , is a unitary semi-presidential republic in Western Europe with several overseas territories and islands located on other continents and in the Indian, Pacific, and Atlantic oceans. Metropolitan France...
's financial crisis, but promptly fell to squabbling over its own structure. Its members had been elected to represent the estates of the realm
Estates of the realm
The Estates of the realm were the broad social orders of the hierarchically conceived society, recognized in the Middle Ages and Early Modern period in Christian Europe; they are sometimes distinguished as the three estates: the clergy, the nobility, and commoners, and are often referred to by...
: the First Estate (the clergy
Clergy
Clergy is the generic term used to describe the formal religious leadership within a given religion. A clergyman, churchman or cleric is a member of the clergy, especially one who is a priest, preacher, pastor, or other religious professional....
), the Second Estate (the nobility
Nobility
Nobility is a social class which possesses more acknowledged privileges or eminence than members of most other classes in a society, membership therein typically being hereditary. The privileges associated with nobility may constitute substantial advantages over or relative to non-nobles, or may be...
) and the Third Estate (which, in theory, represented all of the commoners and, in practice, represented the bourgeoisie
Bourgeoisie
In sociology and political science, bourgeoisie describes a range of groups across history. In the Western world, between the late 18th century and the present day, the bourgeoisie is a social class "characterized by their ownership of capital and their related culture." A member of the...
). The Third Estate had been granted "double representation"—that is, twice as many delegates as each of the other estates—but at the opening session on May 5, 1789 they were informed that all voting would be "by estates" not "by head", so their double representation was to be meaningless in terms of power. They refused this and proceeded to meet separately.

Shuttle diplomacy among the estates continued without success until May 27; on May 28, the representatives of the Third Estate began to meet on their own, calling themselves the Communes ("Commons") and proceeding with their "verification of powers" independently of the other bodies; from June 13 to June 17 they were gradually joined by some of the nobles and the majority of the clergy and other people such as the peasants.

This newly dippers assembly immediately attached itself to the capitalists
Capital (economics)
In economics, capital, capital goods, or real capital refers to already-produced durable goods used in production of goods or services. The capital goods are not significantly consumed, though they may depreciate in the production process...
— the sources of the credit needed to fund the national debt — and to the common people. They consolidated the public debt and declared all existing taxes to have been illegally imposed, but voted in these same taxes provisionally, only as long as the Assembly continued to sit. This restored the confidence of the capitalists and gave them a strong interest in keeping the Assembly in session. As for the common people, the Assembly established a committee of subsistence to deal with food shortages.

Initially, the Assembly announced (and for the most part probably believed) itself to be operating in the interests of King Louis XVI
Louis XVI of France
Louis XVI was a Bourbon monarch who ruled as King of France and Navarre until 1791, and then as King of the French from 1791 to 1792, before being executed in 1793....
as well as those of the people. In theory, royal authority still prevailed and new laws continued to require the king's consent.

Jacques Necker
Jacques Necker
Jacques Necker was a French statesman of Swiss birth and finance minister of Louis XVI, a post he held in the lead-up to the French Revolution in 1789.-Early life:...
, finance minister to Louis XVI, had earlier proposed that the king hold a Séance Royale (Royal Session) in an attempt to reconcile the divided Estates. The king agreed; but none of the three orders were formally notified of the decision to hold a Royal Session. All debates were to be put on hold until the séance royale took place.

Events soon overtook Necker's complex scheme of giving in to the Communes on some points while holding firm on others. No longer interested in Necker's advice, Louis XVI, under the influence of the courtiers of his privy council
Privy council
A privy council is a body that advises the head of state of a nation, typically, but not always, in the context of a monarchic government. The word "privy" means "private" or "secret"; thus, a privy council was originally a committee of the monarch's closest advisors to give confidential advice on...
, resolved to go in state to the Assembly, annul its decrees, command the separation of the orders, and dictate the reforms to be effected by the restored Estates-General. On June 19, he ordered the Salle des États, the hall where the National Assembly met, closed.

On the morning of June 20, the deputies were shocked to discover the doors to their chamber locked and guarded by soldiers. Immediately fearing the worst and anxious that a royal coup was imminent, the deputies congregated in the king's nearby indoor tennis court, where they took a solemn collective oath "never to separate, and to meet wherever circumstances demand, until the constitution of the kingdom is established and affirmed on solid foundations". The deputies pledged to continue to meet until a constitution had been written, despite the royal prohibition. 576 men signed the oath, with only one refusing. The oath was both a revolutionary act and an assertion that political authority derived from the people and their representatives, rather than from the monarch.

Two days later, deprived of use of the tennis court as well, the National Assembly met in the church of Saint Louis, where the majority of the representatives of the clergy joined them: efforts to restore the old order had served only to accelerate events. When, on June 23, in accord with his plan, the king finally addressed the representatives of all three estates
Estates of the realm
The Estates of the realm were the broad social orders of the hierarchically conceived society, recognized in the Middle Ages and Early Modern period in Christian Europe; they are sometimes distinguished as the three estates: the clergy, the nobility, and commoners, and are often referred to by...
, he encountered a stony silence. He concluded by ordering all to disperse. The nobles and clergy obeyed; the deputies of the common people remained seated in a silence finally broken by Mirabeau, whose short speech culminated, "A military force surrounds the assembly! Where are the enemies of the nation? Is Catiline
Catiline
Lucius Sergius Catilina , known in English as Catiline, was a Roman politician of the 1st century BC who is best known for the Catiline conspiracy, an attempt to overthrow the Roman Republic, and in particular the power of the aristocratic Senate.-Family background:Catiline was born in 108 BC to...
at our gates? I demand, investing yourselves with your dignity, with your legislative power, you inclose yourselves within the religion of your oath. It does not permit you to separate till you have formed a constitution." The deputies stood firm.

Necker, conspicuous by his absence from the royal party on that day, found himself in disgrace with Louis, but back in the good graces of the National Assembly. Those of the clergy who had joined the Assembly at the church of Saint Louis remained in the Assembly; forty-seven members of the nobility, including the Duke of Orléans, soon joined them; by June 27, the royal party had overtly given in, although the likelihood of a military counter-coup remained in the air. The French military began to arrive in large numbers around Paris
Paris
Paris is the capital and largest city in France, situated on the river Seine, in northern France, at the heart of the Île-de-France region...
and Versailles
Versailles
Versailles , a city renowned for its château, the Palace of Versailles, was the de facto capital of the kingdom of France for over a century, from 1682 to 1789. It is now a wealthy suburb of Paris and remains an important administrative and judicial centre...
.

Messages of support poured into the Assembly from Paris and other French cities. On July 9, 1789, the Assembly, reconstituting itself as the National Constituent Assembly
National Constituent Assembly
The National Constituent Assembly was formed from the National Assembly on 9 July 1789, during the first stages of the French Revolution. It dissolved on 30 September 1791 and was succeeded by the Legislative Assembly.-Background:...
, addressed the king in polite but firm terms, requesting the removal of the troops (which now included foreign regiments, who showed far greater obedience to the king than did his French troops), but Louis declared that he alone could judge the need for troops, and assured them that the troops had deployed strictly as a precautionary measure. Louis "offered" to move the assembly to Noyon
Noyon
Noyon is a commune in the Oise department in northern France.It lies on the Oise Canal, 100 km north of Paris.-History:...
or Soissons
Soissons
Soissons is a commune in the Aisne department in Picardy in northern France, located on the Aisne River, about northeast of Paris. It is one of the most ancient towns of France, and is probably the ancient capital of the Suessiones...
: that is to say, to place it between two armies and deprive it of the support of the Parisian people.
The source of this article is wikipedia, the free encyclopedia.  The text of this article is licensed under the GFDL.