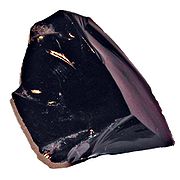 Conchoidal fracture
Fracture
A fracture is the separation of an object or material into two, or more, pieces under the action of stress.The word fracture is often applied to bones of living creatures , or to crystals or crystalline materials, such as gemstones or metal...
describes the way that brittle
Brittle
A material is brittle if, when subjected to stress, it breaks without significant deformation . Brittle materials absorb relatively little energy prior to fracture, even those of high strength. Breaking is often accompanied by a snapping sound. Brittle materials include most ceramics and glasses ...
materials break when they do not follow any natural planes of separation
Cleavage (crystal)
Cleavage, in mineralogy, is the tendency of crystalline materials to split along definite crystallographic structural planes. These planes of relative weakness are a result of the regular locations of atoms and ions in the crystal, which create smooth repeating surfaces that are visible both in the...
. Materials that break in this way include flint
Flint
Flint is a hard, sedimentary cryptocrystalline form of the mineral quartz, categorized as a variety of chert. It occurs chiefly as nodules and masses in sedimentary rocks, such as chalks and limestones. Inside the nodule, flint is usually dark grey, black, green, white, or brown in colour, and...
and other fine-grain
Crystallite
Crystallites are small, often microscopic crystals that, held together through highly defective boundaries, constitute a polycrystalline solid. Metallurgists often refer to crystallites as grains.- Details :...
ed mineral
Mineral
A mineral is a naturally occurring solid chemical substance formed through biogeochemical processes, having characteristic chemical composition, highly ordered atomic structure, and specific physical properties. By comparison, a rock is an aggregate of minerals and/or mineraloids and does not...
s, as well as most amorphous solid
Amorphous solid
In condensed matter physics, an amorphous or non-crystalline solid is a solid that lacks the long-range order characteristic of a crystal....
s, such as obsidian
Obsidian
Obsidian is a naturally occurring volcanic glass formed as an extrusive igneous rock.It is produced when felsic lava extruded from a volcano cools rapidly with minimum crystal growth...
and other types of glass
Glass
Glass is an amorphous solid material. Glasses are typically brittle and optically transparent.The most familiar type of glass, used for centuries in windows and drinking vessels, is soda-lime glass, composed of about 75% silica plus Na2O, CaO, and several minor additives...
.

Conchoidal fractures can also occur in other materials under favorable circumstances. This material property was widely used in the Stone Age
Stone Age
The Stone Age is a broad prehistoric period, lasting about 2.5 million years , during which humans and their predecessor species in the genus Homo, as well as the earlier partly contemporary genera Australopithecus and Paranthropus, widely used exclusively stone as their hard material in the...
to make sharp tools, and minerals that fractured in this fashion were widely traded as a desirable raw material.

Conchoidal fractures often result in a curved breakage surface that resembles the rippling, gradual curves of a mussel
Mussel
The common name mussel is used for members of several families of clams or bivalvia mollusca, from saltwater and freshwater habitats. These groups have in common a shell whose outline is elongated and asymmetrical compared with other edible clams, which are often more or less rounded or oval.The...
shell; the word "conchoid" is derived from the word for this animal (Greek konche). A swelling appears at the point of impact called the bulb of percussion. Shock waves emanating outwards from this point leave their mark on the stone as ripples. Other conchoidal features include small fissure
Fissure
In anatomy, a fissure is a groove, natural division, deep furrow, elongated cleft, or tear in various parts of the body.-Brain:...
s emanating from the bulb of percussion.

They are defined in contrast to the facet
Facet
Facets are flat faces on geometric shapes. The organization of naturally occurring facets was key to early developments in crystallography, since they reflect the underlying symmetry of the crystal structure...
ed fractures often seen in single crystal
Crystal
A crystal or crystalline solid is a solid material whose constituent atoms, molecules, or ions are arranged in an orderly repeating pattern extending in all three spatial dimensions. The scientific study of crystals and crystal formation is known as crystallography...
s such as semiconductor wafer
Wafer (electronics)
A wafer is a thin slice of semiconductor material, such as a silicon crystal, used in the fabrication of integrated circuits and other microdevices...
s and gemstone
Gemstone
A gemstone or gem is a piece of mineral, which, in cut and polished form, is used to make jewelry or other adornments...
s, and the high-energy ductile fracture surfaces desirable in most structural applications. See the main article on Fracture
Fracture
A fracture is the separation of an object or material into two, or more, pieces under the action of stress.The word fracture is often applied to bones of living creatures , or to crystals or crystalline materials, such as gemstones or metal...
.

In lithic
Lithic flake
In archaeology, a lithic flake is a "portion of rock removed from an objective piece by percussion or pressure," and may also be referred to as a chip or spall, or collectively as debitage. The objective piece, or the rock being reduced by the removal of flakes, is known as a core. Once the proper...
stone tool
Stone tool
A stone tool is, in the most general sense, any tool made either partially or entirely out of stone. Although stone tool-dependent societies and cultures still exist today, most stone tools are associated with prehistoric, particularly Stone Age cultures that have become extinct...
s, conchoidal fractures form the basis of flint knapping
Flintknapper
Knapping is the shaping of flint, chert, obsidian or other conchoidal fracturing stone through the process of lithic reduction to manufacture stone tools, strikers for flintlock firearms, or to produce flat-faced stones for building or facing walls, and flushwork decoration.- Method :Flintknapping...
, since the shape of the broken surface is controlled only by the stresses
Stress (physics)
In continuum mechanics, stress is a measure of the internal forces acting within a deformable body. Quantitatively, it is a measure of the average force per unit area of a surface within the body on which internal forces act. These internal forces are a reaction to external forces applied on the body...
applied, and not by some preferred orientation of the material. This property also makes such fractures useful in engineering, since they provide a permanent record of the stress state at the time of failure
Failure
Failure refers to the state or condition of not meeting a desirable or intended objective, and may be viewed as the opposite of success. Product failure ranges from failure to sell the product to fracture of the product, in the worst cases leading to personal injury, the province of forensic...
. As conchoidal fractures can be produced only by mechanical impact, rather than frost
Frost
Frost is the solid deposition of water vapor from saturated air. It is formed when solid surfaces are cooled to below the dew point of the adjacent air as well as below the freezing point of water. Frost crystals' size differ depending on time and water vapour available. Frost is also usually...
cracking for example, they can be a useful method of differentiating prehistoric
Stone Age
The Stone Age is a broad prehistoric period, lasting about 2.5 million years , during which humans and their predecessor species in the genus Homo, as well as the earlier partly contemporary genera Australopithecus and Paranthropus, widely used exclusively stone as their hard material in the...
stone tools from natural stones. 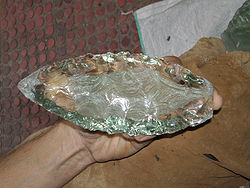 Conchoidal fracture as originally developed by prehistoric people is used by highly skilled artists to craft bifacial glass pieces for ornamental, as well as functional sculptures.
The source of this article is wikipedia, the free encyclopedia.  The text of this article is licensed under the GFDL.