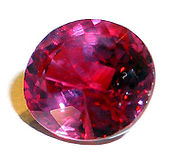 Facets are flat faces on geometric shapes. The organization of naturally occurring facets was key to early developments in crystallography
Crystallography
Crystallography is the experimental science of the arrangement of atoms in solids. The word "crystallography" derives from the Greek words crystallon = cold drop / frozen drop, with its meaning extending to all solids with some degree of transparency, and grapho = write.Before the development of...
, since they reflect the underlying symmetry of the crystal
Crystal
A crystal or crystalline solid is a solid material whose constituent atoms, molecules, or ions are arranged in an orderly repeating pattern extending in all three spatial dimensions. The scientific study of crystals and crystal formation is known as crystallography...
structure. Gemstone
Gemstone
A gemstone or gem is a piece of mineral, which, in cut and polished form, is used to make jewelry or other adornments...
s commonly have facets cut into them in order to improve their appearance by allowing them to reflect light.

Of the hundreds of facet arrangements that have been used, the most famous is probably the round brilliant cut, used for diamond
Diamond
In mineralogy, diamond is an allotrope of carbon, where the carbon atoms are arranged in a variation of the face-centered cubic crystal structure called a diamond lattice. Diamond is less stable than graphite, but the conversion rate from diamond to graphite is negligible at ambient conditions...
and many colored gemstones. This first early version of what would become the modern Brilliant Cut is said to have been devised by an Italian named Peruzzi, sometime in the late 17th century. Later on, the first angles for an "ideal" cut diamond were calculated by Marcel Tolkowsky
Marcel Tolkowsky
Marcel Tolkowsky was a member of a Belgian family of diamond cutters and an engineer by education. He is generally acknowledged as the father of the modern round brilliant diamond cut...
in 1919. Slight modifications have been made since then, but angles for "ideal" cut diamonds are still similar to Tolkowsky's formula. Round brilliants cut before the advent of "ideal" angles are often referred to as "Early round brilliant cut" or "Old European brilliant cut" and are considered poorly cut by today's standards, though there is still interest in them from collectors. Other historic diamond cuts include the "Old Mine Cut" which is similar to early versions of the round brilliant, but has a rectangular outline, and the "Rose Cut" which is a simple cut consisting of a flat, polished back, and varying numbers of angled facets on the crown, producing a faceted dome. Sometimes a 58th facet, called a culet
Culet
In gemology, a culet is a flat face on the bottom of a gemstone.During the 14th century, after the adoption of the table cut, a further facet was added to the bottom of the cut parallel to the surface of the table. The term used for these bottom facets derives from the latin word for bottom,...
is cut on the bottom of the stone to help prevent chipping of the pavilion point. Earlier brilliant cuts often have very large culets, while modern brilliant cut diamonds generally lack the culet facet, or it may be present in minute size. 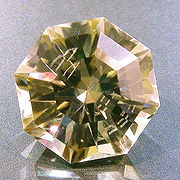 The art of cutting a gem is an exacting procedure performed on a faceting machine
Faceting machine
A faceting machine is broadly defined as any device that allows the user to place and polish facets onto a mineral specimen. Machines can range in sophistication from primitive jamb-peg machines to highly refined, and highly expensive, commercially available machines. A major division among...
. The ideal product of facet cutting is a gemstone that displays a pleasing balance of internal reflections of light known as brilliance, strong and colorful dispersion which is commonly referred to as "fire," and brightly colored flashes of reflected light known as scintillation. Typically transparent to translucent
Transparency and translucency
In the field of optics, transparency is the physical property of allowing light to pass through a material; translucency only allows light to pass through diffusely. The opposite property is opacity...
stones are faceted, although opaque
Opacity (optics)
Opacity is the measure of impenetrability to electromagnetic or other kinds of radiation, especially visible light. In radiative transfer, it describes the absorption and scattering of radiation in a medium, such as a plasma, dielectric, shielding material, glass, etc...
materials may occasionally be faceted as the luster
Lustre (mineralogy)
Lustre is a description of the way light interacts with the surface of a crystal, rock, or mineral. The word lustre traces its origins back to the Latin word lux, meaning "light", and generally implies radiance, gloss, or brilliance....
of the gem will produce appealing reflections. Pleonaste (black spinel
Spinel
Spinel is the magnesium aluminium member of the larger spinel group of minerals. It has the formula MgAl2O4. Balas ruby is an old name for a rose-tinted variety.-Spinel group:...
) and black diamond are examples of opaque faceted gemstones.

The angles used for each facet play a crucial role in the final outcome of a gem. While the general facet arrangement of a particular gemstone cut may appear the same in any given gem material, the angles of each facet must be carefully adjusted to maximize the optical performance. The angles used will vary based on the refractive index
Refractive index
In optics the refractive index or index of refraction of a substance or medium is a measure of the speed of light in that medium. It is expressed as a ratio of the speed of light in vacuum relative to that in the considered medium....
of the gem material. When light passes through a gemstone and strikes a polished facet, the minimum angle possible for the facet to reflect the light back into the gemstone is called the critical angle
Total internal reflection
Total internal reflection is an optical phenomenon that happens when a ray of light strikes a medium boundary at an angle larger than a particular critical angle with respect to the normal to the surface. If the refractive index is lower on the other side of the boundary and the incident angle is...
. If the ray of light strikes a surface lower than this angle, it will leave the gem material instead of reflecting through the gem as brilliance. These lost light rays are sometimes referred to as "light leakage", and the effect caused by it is called "windowing" as the area will appear transparent and without brilliance. This is especially common in poorly cut commercial gemstones. Gemstones with higher refractive indexes generally make more desirable gemstones, the critical angle decreases as refractive indices increase, allowing for greater internal reflections as the light is less likely to escape.

This machine uses a motor-driven plate to hold a precisely flat disk (known as a "lap
Lapping
Lapping is a machining operation, in which two surfaces are rubbed together with an abrasive between them, by hand movement or by way of a machine.This can take two forms...
"for the purpose of cutting or polishing. Diamond abrasives bonded to metal or resin are typically used for cutting, and a wide variety of materials are used for polishing laps in conjunction with either very fine diamond powder or oxide-based polishes. Water is typically used for cutting, while either oil or water is used for the polishing process.

The machine uses a system generally called a "mast" which consists of an angle readout, height adjustment and typically a gear (called an "index gear") with a particular number of teeth is used as a means of setting the rotational angle. The angles of rotation are evenly divided by the number of teeth present on the gear, though many machines include additional means of adjusting the rotational angle in finer increments, often called a "cheater". The stone is bonded to a (typically metal) rod known as a "dop" or "dop stick" and is held in place by part of the mast referred to as the "quill".

The dopped stone is ground at precise angles and indexes on cutting laps of progressively finer grit, and then the process is repeated a final time to polish each facet. Accurate repetition of angles in the cutting and polishing process is aided by the angle readout and index gear. The physical process of polishing is a subject of debate. One commonly accepted theory is that the fine abrasive particles of a polishing compound produce abrasions smaller than the wavelengths of light, thus making the minute scratches invisible. Since gemstones have two sides (the crown and pavilion), a device often called a "transfer jig" is used to flip the stone so that each side may be cut and polished.

Cleaving
Cleavage (crystal)
Cleavage, in mineralogy, is the tendency of crystalline materials to split along definite crystallographic structural planes. These planes of relative weakness are a result of the regular locations of atoms and ions in the crystal, which create smooth repeating surfaces that are visible both in the...
relies on planar weaknesses of the chemical bonds in the crystal structure of a mineral. If a sharp blow is applied at the correct angle, the stone may split cleanly apart. While cleaving is sometimes used to split uncut gemstones into smaller pieces, it is never used to produce facets. Cleaving of diamonds was once common, but as the risk of damaging a stone is too high, undesirable diamond pieces often resulted. The preferred method of splitting diamonds into smaller pieces is now sawing
Diamond Blade
A diamond blade is a saw blade which has diamonds fixed on the blade's base to use the diamonds to cut hard or abrasive materials. There are many types of diamond blades, and they have been applied in many industries, for example, construction industry to cut stone, concrete, asphalt, bricks, coal...
.

An older and more primitive style of faceting machine called a jamb peg machine used wooden dop sticks of precise length and a "mast" system consisting of a plate with holes carefully placed in it. By placing the back end of the dop into one of the many holes, the stone could be introduced to the lap at precise angles. These machines took considerable skill to operate effectively.

Another method of facet cutting involves the use of cylinders to produce curved, concave facets. This technique can produce many unusual and artistic variations of the traditional faceting process.