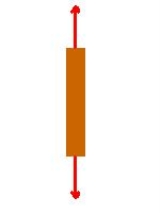 Encyclopedia
Compressive strength is the capacity of a material
Material
Material is anything made of matter, constituted of one or more substances. Wood, cement, hydrogen, air and water are all examples of materials. Sometimes the term "material" is used more narrowly to refer to substances or components with certain physical properties that are used as inputs to...
or structure to withstand axially directed pushing forces. When the limit of compressive strength is reached, materials are crushed. Concrete
Concrete
Concrete is a composite construction material, composed of cement and other cementitious materials such as fly ash and slag cement, aggregate , water and chemical admixtures.The word concrete comes from the Latin word...
can be made to have high compressive strength, e.g. many concrete structures have compressive strengths in excess of 50 MPa
MPA
-Academic degrees:* Master of Professional Accountancy* Master of Public Administration* Master of Public Affairs* Master of Physician's Assistant-Chemicals:* Medroxyprogesterone acetate, also known by the brand name Depo-Provera* Morpholide of pelargonic acid...
, whereas a material such as soft sandstone
Sandstone
Sandstone is a sedimentary rock composed mainly of sand-sized minerals or rock grains.Most sandstone is composed of quartz and/or feldspar because these are the most common minerals in the Earth's crust. Like sand, sandstone may be any colour, but the most common colours are tan, brown, yellow,...
may have a compressive strength as low as 5 or 10 MPa.

Compressive strength is often measured on a universal testing machine
Universal Testing Machine
A universal testing machine, also known as a universal tester, materials testing machine or materials test frame, is used to test the tensile stress and compressive strength of materials...
; these range from very small table top systems to ones with over 53 MN capacity. Measurements of compressive strength are affected by the specific test method
Test method
A test method is a definitive procedure that produces a test result.A test can be considered as technical operation that consists of determination of one or more characteristics of a given product, process or service according to a specified procedure. Often a test is part of an experiment.The test...
and conditions of measurement. Compressive strengths are usually reported in relationship to a specific technical standard that may, or may not, relate to end-use performance.

On an atomic level, the molecules or atoms are forced apart when in tension whereas in compression they are forced together. Since atoms in solids always try to find an equilibrium position, and distance between other atoms, forces arise throughout the entire material which oppose both tension or compression.

The phenomena prevailing on an atomic level are therefore similar. On a macroscopic scale, these aspects are also reflected in the fact that the properties of most common materials in tension and compression are quite similar.

The major difference between the two types of loading is the strain which would have opposite signs for tension (positive—it gets longer) and compression (negative—it gets shorter).

Another major difference is tension tends to pull small sideways deflections back into alignment, while compression tends to amplify such deflection into buckling
Buckling
In science, buckling is a mathematical instability, leading to a failure mode.Theoretically, buckling is caused by a bifurcation in the solution to the equations of static equilibrium...
.

By definition, the compressive strength of a material is that value of uniaxial compressive stress reached when the material fails completely. The compressive strength is usually obtained experimentally by means of a compressive test. The apparatus used for this experiment is the same as that used in a tensile test. However, rather than applying a uniaxial tensile load, a uniaxial compressive load is applied. As can be imagined, the specimen (usually cylindrical) is shortened as well as spread laterally. A Stress–strain curve is plotted by the instrument and would look similar to the following:
The compressive strength of the material would correspond to the stress at the red point shown on the curve. Even in a compression test, there is a linear region where the material follows Hooke's Law
Hooke's law
In mechanics, and physics, Hooke's law of elasticity is an approximation that states that the extension of a spring is in direct proportion with the load applied to it. Many materials obey this law as long as the load does not exceed the material's elastic limit. Materials for which Hooke's law...
. Hence for this region

where this time E refers to the Young's Modulus for compression.

This linear region terminates at what is known as the yield point. Above this point the material behaves plastically and will not return to its original length once the load is removed.

There is a difference between the engineering stress and the true stress. By its basic definition the uniaxial stress is given by:

As stated, the area of the specimen varies on compression. In reality therefore the area is some function of the applied load i.e. A = f(F). Indeed, stress is defined as the force divided by the area at the start of the experiment. This is known as the engineering stress and is defined by,

The difference in values may therefore be summarized as follows:

As a final note, it should be mentioned that the frictional force mentioned in the second point is not constant for the entire cross section of the specimen. It varies from a minimum at the centre to a maximum at the edges. Due to this a phenomenon known as barrelling occurs where the specimen attains a barrel shape.


Comparison of compressive and tensile strengths