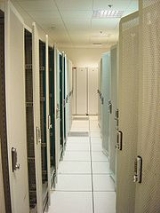 Encyclopedia
A colocation centre or colocation center (also spelled co-location, colo, or coloc), is a type of data centre
Data center
A data center is a facility used to house computer systems and associated components, such as telecommunications and storage systems...
where equipment space and bandwidth are available for rental to retail customers. Colocation facilities provide space, power, cooling, and physical security for the server, storage, and networking equipment of other firms—and connect them to a variety of telecommunications and network service providers—with a minimum of cost and complexity.

Colocation has become a popular option for companies with midsize IT needs--especially those in Internet related business--because it allows the company to focus its IT staff on the actual work being done, instead of the logistical support needs which underlie the work. Significant benefits of scale (large power and mechanical systems) result in large colocation facilities, typically 4500 to 9500 square metres (roughly 50000 to 100000 square feet).

Colocation facilities provide, as a retail rental business, usually on a term contract:


They also provide redundant systems for, usually, all of these features, to mitigate the problems when each inevitably fails.

Among the economies of scale which result from grouping many small-to-midsized customers together in one facility are included:

Major types of colocation customers are:

Buildings with data centres inside them are often easy to recognize due to the amount of cooling equipment located outside or on the roof.

Colocation facilities have many other special characteristics: 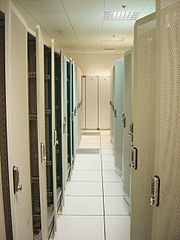 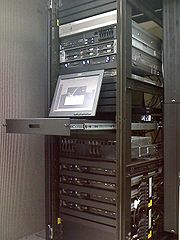 Colocation data centres are often audited to prove that they live up to certain standards and levels of reliability; the most commonly seen systems are SAS 70 and the tier system by the Uptime Institute.

Some colocation facilities require that employees escort customers, especially if there are not individual locked cages/cabinets for each customer. In other facilities, a PIN
Personal identification number
A personal identification number is a secret numeric password shared between a user and a system that can be used to authenticate the user to the system. Typically, the user is required to provide a non-confidential user identifier or token and a confidential PIN to gain access to the system...
code or proximity card
Proximity card
Proximity card is a generic name for contactless integrated circuit devices used for security access or payment systems. The standard can refer to the older 125 kHz devices or the newer 13.56 MHz contactless RFID cards, most commonly known as contactless smartcards.Modern proximity cards...
access system may allow customers access into the building, and individual cages /cabinets have locks. Biometric
Biometrics
Biometrics As Jain & Ross point out, "the term biometric authentication is perhaps more appropriate than biometrics since the latter has been historically used in the field of statistics to refer to the analysis of biological data [36]" . consists of methods...
security measures, such as fingerprint recognition, voice recognition and "weight matching", are also becoming more commonplace in modern facilities. 'Man-traps' are also recommend, where a hallway leading into the data center has a door at each end, and both cannot be open simultaneously; visitors can been seen via CCTV and authorized to enter.

Colocation facilities generally have generators
Electrical generator
In electricity generation, an electric generator is a device that converts mechanical energy to electrical energy. A generator forces electric charge to flow through an external electrical circuit. It is analogous to a water pump, which causes water to flow...
that start automatically when utility power fails, usually running on diesel fuel
Diesel engine
A diesel engine is an internal combustion engine that uses the heat of compression to initiate ignition to burn the fuel, which is injected into the combustion chamber...
. These generators may have varying levels of redundancy, depending on how the facility is built.

Some customers choose to use equipment that is powered directly by 48VDC (nominal) battery banks. This may provide better energy efficiency, and may reduce the number of parts that can fail, though the reduced voltage greatly increases necessary current, and thus the size (and cost) of power delivery wiring.

An alternative to batteries is a motor generator connected to a flywheel
Flywheel
A flywheel is a rotating mechanical device that is used to store rotational energy. Flywheels have a significant moment of inertia, and thus resist changes in rotational speed. The amount of energy stored in a flywheel is proportional to the square of its rotational speed...
and diesel engine.

Many colocation facilities can provide redundant, A and B power feeds to customer equipment, and high end servers and telecommunications equipment often can have two power supplies installed.

Colocation facilities are sometimes connected to multiple sections of the utility power grid for additional reliability.

The operator of a colocation facility generally provides air conditioning
Air conditioning
An air conditioner is a home appliance, system, or mechanism designed to dehumidify and extract heat from an area. The cooling is done using a simple refrigeration cycle...
for the computer and telecommunications equipment in the building. The cooling system generally includes some degree of redundancy.

In older facilities, the cooling system capacity often limits the amount of equipment that can operate in the building, more so than the available square footage.

Most peering
Peering
In computer networking, peering is a voluntary interconnection of administratively separate Internet networks for the purpose of exchanging traffic between the customers of each network. The pure definition of peering is settlement-free or "sender keeps all," meaning that neither party pays the...
points sit in colocation centres.

Because of the high concentration of servers inside larger colocation centres, most carriers will be interested in bringing direct connections to such buildings.

In many cases there will be a larger Internet Exchange
Internet Exchange Point
An Internet exchange point is a physical infrastructure through which Internet service providers exchange Internet traffic between their networks . IXPs reduce the portion of an ISP's traffic which must be delivered via their upstream transit providers, thereby reducing the average per-bit...
hosted inside a colocation centre, where customers can connect for peering.

Colocation facilities generally have multiple locations for fibre optic cables to enter the building, to provide redundancy so that communications can continue if one bundle of cables is damaged. Some also have wireless backup connections, for example via satellite.