Encyclopedia
An Internet exchange point (IX or IXP) is a physical infrastructure through which Internet service provider
Internet service provider
An Internet service provider is a company that provides access to the Internet. Access ISPs directly connect customers to the Internet using copper wires, wireless or fiber-optic connections. Hosting ISPs lease server space for smaller businesses and host other people servers...
s (ISPs) exchange Internet
Internet
The Internet is a global system of interconnected computer networks that use the standard Internet protocol suite to serve billions of users worldwide...
traffic between their networks (autonomous system
Autonomous system (Internet)
Within the Internet, an Autonomous System is a collection of connected Internet Protocol routing prefixes under the control of one or more network operators that presents a common, clearly defined routing policy to the Internet....
s). IXPs reduce the portion of an ISP's traffic which must be delivered via their upstream
Upstream (networking)
In computer networking, upstream refers to the direction in which data can be transferred from the client to the server . This differs greatly from downstream not only in theory and usage, but also in that upstream speeds are usually at a premium...
transit
Internet transit
Internet transit is the service of allowing network traffic to cross or "transit" a computer network, usually used to connect a smaller Internet service provider to the larger Internet...
providers, thereby reducing the average per-bit delivery cost
Average Per-Bit Delivery Cost
Average Per-Bit Delivery Cost, or APBDC, is one relatively common method by which Internet Service Providers calculate their cost of goods sold. Basically, it averages the cost of however many bits were actually sent or received across a link with the actual cost of operation of the link...
of their service. Furthermore, the increased number of paths learned through the IXP improves routing efficiency and fault-tolerance. 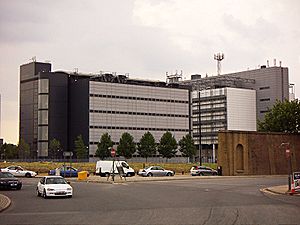 The primary purpose of an IXP is to allow networks to interconnect directly, via the exchange, rather than through one or more third-party networks. The advantages of the direct interconnection are numerous, but the primary reasons are cost, latency, and bandwidth. Traffic passing through an exchange is typically not billed by any party, whereas traffic to an ISP's upstream provider is. The direct interconnection, often located in the same city as both networks, avoids the need for data to travel to other cities (potentially on other continent
Continent
A continent is one of several very large landmasses on Earth. They are generally identified by convention rather than any strict criteria, with seven regions commonly regarded as continents—they are : Asia, Africa, North America, South America, Antarctica, Europe, and Australia.Plate tectonics is...
s) to get from one network to another, thus reducing latency. The third advantage, speed, is most noticeable in areas that have poorly developed long-distance connections. ISPs in these regions might have to pay between 10 or 100 times more for data transport than ISPs in North America, Europe or Japan. Therefore, these ISPs typically have slower, more limited connections to the rest of the internet. However, a connection to a local IXP may allow them to transfer data without limit, and without cost, vastly improving the bandwidth between customers of the two adjacent ISPs.

The technical and business logistics of traffic exchange between ISPs is governed by mutual peering
Peering
In computer networking, peering is a voluntary interconnection of administratively separate Internet networks for the purpose of exchanging traffic between the customers of each network. The pure definition of peering is settlement-free or "sender keeps all," meaning that neither party pays the...
agreements. Under such agreements traffic is often exchanged without compensation. When an IXP incurs operating costs, they are typically shared among all of its participants. At the more expensive exchanges, participants pay a monthly or annual fee, usually determined by the speed of the port or ports which they're using, or much less commonly by the volume of traffic which they're passing across the exchange. Fees based on volume of traffic are unpopular because they provide a counterincentive to growth of the exchange. Some exchanges charge a setup fee to offset the costs of the switch port and any media adaptors (gigabit interface converters, small form-factor pluggable transceivers, XFP transceiver
XFP transceiver
The XFP is a standard for transceivers for high-speed computer network and telecommunication links that use optical fiber. It was defined by an industry group in 2002, along with its interface to other electrical components which is called XFI.-Description:XFP modules are hot-swappable and...
s, XENPAK
XENPAK
XENPAK is a Multisource Agreement , instigated by Agilent Technologies and Agere Systems, that defines a fiber-optic or wired transceiver module which conforms to the 10 Gigabit Ethernet standard of the Institute of Electrical and Electronics Engineers 802.3 working group...
s, etc.) that the new participant requires.

Internet traffic exchange between two participants on an IXP is facilitated by Border Gateway Protocol
Border Gateway Protocol
The Border Gateway Protocol is the protocol backing the core routing decisions on the Internet. It maintains a table of IP networks or 'prefixes' which designate network reachability among autonomous systems . It is described as a path vector protocol...
(BGP) routing configurations between them. They choose to announce routes via the peering relationship - either routes to their own addresses, or routes to addresses of other ISPs that they connect to, possibly via other mechanisms. The other party to the peering can then apply route filtering
Route filtering
In the context of network routing, route filtering is the process by which certain routes are not considered for inclusion in the local route database, or not advertised to one's neighbours...
, where it chooses to accept those routes, and route traffic accordingly, or to ignore those routes, and use other routes to reach those addresses.

In many cases, an ISP will have both a direct link to another ISP and accept a route (normally ignored) to the other ISP through the IXP; if the direct link fails, traffic will then start flowing over the IXP. In this way, the IXP acts as a backup link.

When these conditions are met, and a contractual structure exists to create a market to purchase network services, the IXP is sometimes called a transit exchange. The Vancouver Transit Exchange, for example, is described as a "shopping mall" of service providers at one central location, making it easy to switch providers - "as simple as getting a VLAN
Virtual LAN
A virtual local area network, virtual LAN or VLAN, is a group of hosts with a common set of requirements that communicate as if they were attached to the same broadcast domain, regardless of their physical location...
to a new provider." The VTE is run by BCNET, a public entity.

Advocates of green broadband schemes and more competitive telecom services often advocate aggressive expansion of transit exchanges into every municipal area network so that competing service providers can place such equipment as video on demand
Video on demand
Video on Demand or Audio and Video On Demand are systems which allow users to select and watch/listen to video or audio content on demand...
hosts and PSTN switches to serve existing phone equipment, without being answerable to any monopoly incumbent.