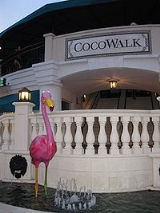 Encyclopedia
CocoWalk is an upscale lifestyle center
Lifestyle center (retail)
A lifestyle center is a shopping center or mixed-used commercial development that combines the traditional retail functions of a shopping mall with leisure amenities oriented towards upscale consumers...
in the Coconut Grove neighborhood of Miami, Florida
Florida
Florida is a state in the southeastern United States, located on the nation's Atlantic and Gulf coasts. It is bordered to the west by the Gulf of Mexico, to the north by Alabama and Georgia and to the east by the Atlantic Ocean. With a population of 18,801,310 as measured by the 2010 census, it...
. The center houses over thirty stores and services, including a movie theater, shops, and multiple restaurants. Subsequently renamed The Gallery at CocoWalk by its former owners, Thor Equities
Thor Equities
Thor Equities, LLC, is a real estate development and investment firm founded by Joseph Sitt based in New York City that specializes in revitalizing and adding value to urban properties in high density areas. The company owns the historic Palmer House Hilton in Chicago and much of the ocean front...
, the mall is currently owned by PMAT Real Estate Investments, L. L. C.

When CocoWalk opened in November, 1990, AMC Cocowalk 16 Theaters was the center's first and only anchor. Phase II of the center was completed in 1994, adding eight more screens and totaling the cinema's composition to sixteen. In 2002, Phase III was completed, a four story office building. The entire first and most of the second floor allowed for the expansion of Gap
Gap (clothing retailer)
The Gap, Inc. is an American clothing and accessories retailer based in San Francisco, California, and founded in 1969 by Donald G. Fisher and Doris F. Fisher. The company has five primary brands: the namesake Gap banner, Banana Republic, Old Navy, Piperlime and Athleta. As of September 2008,...
. Recently, the movie theater has undergone renovations, and reopened as Paragon Grove 13, branded under Muvico Theaters
Muvico Theaters
Muvico Theaters is a movie theater chain. Its headquarters are in Oakland Park, Florida, near Fort Lauderdale.Based in Fort Lauderdale, Florida, Muvico has seven complexes in Florida. Muvico has also expanded out of the state of Florida to include complexes in the Chicago Metropolitan Area , and...
, on June 4, 2010.