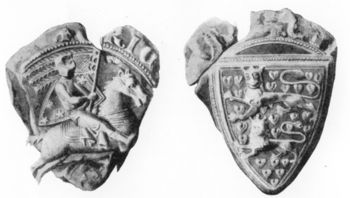 The coat of arms of Schleswig depicts two blue lion
Lion
The lion is one of the four big cats in the genus Panthera, and a member of the family Felidae. With some males exceeding 250 kg in weight, it is the second-largest living cat after the tiger...
s in a gold
Gold
Gold is a chemical element with the symbol Au and an atomic number of 79. Gold is a dense, soft, shiny, malleable and ductile metal. Pure gold has a bright yellow color and luster traditionally considered attractive, which it maintains without oxidizing in air or water. Chemically, gold is a...
en shield. It is the heraldic
Heraldry
Heraldry is the profession, study, or art of creating, granting, and blazoning arms and ruling on questions of rank or protocol, as exercised by an officer of arms. Heraldry comes from Anglo-Norman herald, from the Germanic compound harja-waldaz, "army commander"...
symbol of the former Duchy
Duchy
A duchy is a territory, fief, or domain ruled by a duke or duchess.Some duchies were sovereign in areas that would become unified realms only during the Modern era . In contrast, others were subordinate districts of those kingdoms that unified either partially or completely during the Medieval era...
of Schleswig
Schleswig
Schleswig or South Jutland is a region covering the area about 60 km north and 70 km south of the border between Germany and Denmark; the territory has been divided between the two countries since 1920, with Northern Schleswig in Denmark and Southern Schleswig in Germany...
, originally a Danish province but later disputed between Danes and Germans. The region has been divided between Germany and Denmark since 1920 and the symbol consequently appears in official heraldry in both countries. It is derived from the national coat of arms of Denmark
Coat of arms of Denmark
The royal coat of arms is more complex. The shield is quartered by a silver cross fimbriated in red, derived from the Danish flag, the Dannebrog. The first and fourth quarters represent Denmark by three crowned lions passant accompanied by nine hearts; the second quarter contains two lions passant...
and has been dated to the middle of the 13th century, first known from the arms of Erik Abelsøn, Duke of Schleswig. Throughout the ages, the design has featured both crowned and uncrowned lions, the lions have occasionally been accompanied by hearts and usage between lions
Lion (heraldry)
The lion is a common charge in heraldry. It traditionally symbolises bravery, valour, strength, and royalty, since traditionally, it is regarded as the king of beasts.-Attitudes:...
and leopards
Leopard (heraldry)
The leopard or lion passant guardant is a frequently used charge in heraldry. It mostly appears in groups of three, which are positioned over each another.-Heraldic and zoological leopards:...
has shifted. The far most common version was to omit both crowns and hearts and this version has been used exclusively for several centuries.

The blazon
Blazon
In heraldry and heraldic vexillology, a blazon is a formal description of a coat of arms, flag or similar emblem, from which the reader can reconstruct the appropriate image...
in heraldic
Heraldry
Heraldry is the profession, study, or art of creating, granting, and blazoning arms and ruling on questions of rank or protocol, as exercised by an officer of arms. Heraldry comes from Anglo-Norman herald, from the Germanic compound harja-waldaz, "army commander"...
terms is: Or, two lions passant in pale Azure armed Or langued Gules.

The unmodified arms of Schleswig is represented in the coat of arms
Coat of arms
A coat of arms is a unique heraldic design on a shield or escutcheon or on a surcoat or tabard used to cover and protect armour and to identify the wearer. Thus the term is often stated as "coat-armour", because it was anciently displayed on the front of a coat of cloth...
of Denmark's royal family. The symbol has been located in the top-right corner since 1819 as specified by royal decree
Decree
A decree is a rule of law issued by a head of state , according to certain procedures . It has the force of law...
. The current version was specified by royal decree on July 5, 1972.

A modified form of the symbol was used by the South Jutland County
South Jutland County
South Jutland County is a former county on the south-central portion of the Jutland Peninsula in southern Denmark....
from 1980 until the county
Counties of Denmark
Denmark was until December 31, 2006 divided into 15 counties , and 270 municipalities . On January 1, 2007, the counties were replaced by five Regions and the number of municipalities slashed to 98....
was dissolved effective January 1, 2007. The county originally wished to use the historic arms, but official authorisation was withheld to avoid confusion with both the royal coat of arms and the arms of the German Bundesland
States of Germany
Germany is made up of sixteen which are partly sovereign constituent states of the Federal Republic of Germany. Land literally translates as "country", and constitutionally speaking, they are constituent countries...
Schleswig-Holstein
Schleswig-Holstein
Schleswig-Holstein is the northernmost of the sixteen states of Germany, comprising most of the historical duchy of Holstein and the southern part of the former Duchy of Schleswig...
. This modified version showed the two lions jointly holding a Danish pennant
Pennon
A pennon was one of the principal three varieties of flags carried during the Middle Ages . Pennoncells and streamers or pendants are considered as minor varieties of this style of flag. The pennon is a flag resembling the guidon in shape, but only half the size...
. This was inspired by the medieval
Middle Ages
The Middle Ages is a periodization of European history from the 5th century to the 15th century. The Middle Ages follows the fall of the Western Roman Empire in 476 and precedes the Early Modern Era. It is the middle period of a three-period division of Western history: Classic, Medieval and Modern...
seal
Seal (device)
A seal can be a figure impressed in wax, clay, or some other medium, or embossed on paper, with the purpose of authenticating a document ; but the term can also mean the device for making such impressions, being essentially a mould with the mirror image of the design carved in sunken- relief or...
of Eric of Pomerania
Eric of Pomerania
Eric of Pomerania KG was King Eric III of Norway Norwegian Eirik, King Eric VII of Denmark , and as Eric King of Sweden...
in which the three lions jointy hold the Danish flag
Flag of Denmark
The national flag of Denmark, Dannebrog is red with a white Scandinavian cross that extends to the edges of the flag; the vertical part of the cross is shifted to the hoist side...
.

The coat of arms of Schleswig-Holstein is a combination of the historic insignia of Holstein
Holstein
Holstein is the region between the rivers Elbe and Eider. It is part of Schleswig-Holstein, the northernmost state of Germany....
and a slightly modified version of the Schleswig arms. This symbol was used by the secessionist German administration of the two duchies during the First War of Schleswig
First War of Schleswig
The First Schleswig War or Three Years' War was the first round of military conflict in southern Denmark and northern Germany rooted in the Schleswig-Holstein Question, contesting the issue of who should control the Duchies of Schleswig and Holstein. The war, which lasted from 1848–1851,...
(1848-51) and depicted on the currency issued by this administration. At this time, the lions faced left. The area became a Prussia
Prussia
Prussia was a German kingdom and historic state originating out of the Duchy of Prussia and the Margraviate of Brandenburg. For centuries, the House of Hohenzollern ruled Prussia, successfully expanding its size by way of an unusually well-organized and effective army. Prussia shaped the history...
n province
Province of Schleswig-Holstein
The Province of Schleswig-Holstein was a province of the Kingdom of Prussia and the Free State of Prussia from 1868 to 1946. It was created from the Duchies of Schleswig and Holstein, which had been conquered by Prussia and the Austrian Empire from Denmark in the Second War of Schleswig in 1864...
following the Second War of Schleswig
Second War of Schleswig
The Second Schleswig War was the second military conflict as a result of the Schleswig-Holstein Question. It began on 1 February 1864, when Prussian forces crossed the border into Schleswig.Denmark fought Prussia and Austria...
(1864) and the symbol was restored. The lions have faced right since the 1880s. According to legend, this change was ordered by Otto von Bismarck
Otto von Bismarck
Otto Eduard Leopold, Prince of Bismarck, Duke of Lauenburg , simply known as Otto von Bismarck, was a Prussian-German statesman whose actions unified Germany, made it a major player in world affairs, and created a balance of power that kept Europe at peace after 1871.As Minister President of...
who noted that it was "impolite" of the Schleswig lions to turn their backs on Holstein. The official insignia is reserved for the government of Schleswig-Holstein, but a slightly modified version is allowed for use by the general public. The lions also appear in the coats of arms of the city of Flensburg
Flensburg
Flensburg is an independent town in the north of the German state of Schleswig-Holstein. Flensburg is the centre of the region of Southern Schleswig...
, and the Kreise Schleswig-Flensburg
Schleswig-Flensburg
Schleswig-Flensburg is a district in Schleswig-Holstein, Germany. It is bounded by the districts of Rendsburg-Eckernförde, Dithmarschen and Nordfriesland, the Region Syddanmark in Denmark, the city of Flensburg and the Baltic Sea.-History:Written history in the area began about 800 AD, when the...
and Rendsburg-Eckernförde
Rendsburg-Eckernförde
Rendsburg-Eckernförde is a district in Schleswig-Holstein, Germany. It is bounded by the city of Kiel, the district of Plön, the city of Neumünster, the districts of Segeberg, Steinburg, Dithmarschen and Schleswig-Flensburg, and the Baltic Sea.-History:In 1867 the Prussian administration...
. Many municipal arms in the German part of Schleswig also use insignia featuring either the two lions or the Schleswig colours, blue and yellow.
The source of this article is wikipedia, the free encyclopedia.  The text of this article is licensed under the GFDL.