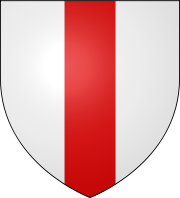 A pale is a term used in heraldic
Heraldry
Heraldry is the profession, study, or art of creating, granting, and blazoning arms and ruling on questions of rank or protocol, as exercised by an officer of arms. Heraldry comes from Anglo-Norman herald, from the Germanic compound harja-waldaz, "army commander"...
blazon
Blazon
In heraldry and heraldic vexillology, a blazon is a formal description of a coat of arms, flag or similar emblem, from which the reader can reconstruct the appropriate image...
and vexillology
Vexillology
Vexillology is the scholarly study of flags. The word is a synthesis of the Latin word vexillum, meaning 'flag', and the Greek suffix -logy, meaning 'study'. The vexillum was a particular type of flag used by Roman legions during the classical era; its name is a diminutive form of the word velum...
to describe a charge on a coat of arms
Coat of arms
A coat of arms is a unique heraldic design on a shield or escutcheon or on a surcoat or tabard used to cover and protect armour and to identify the wearer. Thus the term is often stated as "coat-armour", because it was anciently displayed on the front of a coat of cloth...
(or flag
Flag
A flag is a piece of fabric with a distinctive design that is usually rectangular and used as a symbol, as a signaling device, or decoration. The term flag is also used to refer to the graphic design employed by a flag, or to its depiction in another medium.The first flags were used to assist...
), that takes the form of a band running vertically down the center of the shield. Writers broadly agree that the width of the pale ranges from about one-fifth to about one-third of the width of the shield, but this width is not fixed. A narrow pale is more likely if it is uncharged, that is, if it does not have other objects placed on it. If charged, the pale is typically wider to allow room for the objects drawn there.

A pale may be couped ("cut off" at either end, and so not reaching the top or bottom of the shield); however, while other charges
Charge (heraldry)
In heraldry, a charge is any emblem or device occupying the field of an escutcheon . This may be a geometric design or a symbolic representation of a person, animal, plant, object or other device...
if couped at the top would just be blazoned as "couped in chief," the special term for this in the case of the pale is "a pale retrait" (this also applies to pallets; see below). If couped at the bottom it is blazoned as "a pale retrait in base".

In British heraldry when two or more pales appear on a field, they are conventionally termed pallets. While a pallet is generally classified as a diminutive of the pale, the pallets on a shield of two pallets may be no narrower than the pale on another where it has been narrowed to accommodate other charges on either side.

In pale refers to the appearance of several items on the shield being lined up in the direction of a pale.

A shield party per pale is divided into two parts by a single line which runs in the direction of a pale.

The Canadian pale
Canadian pale
In vexillology a Canadian pale is a centre band of a vertical triband flag that covers half the length of a flag, rather than a third in most triband designs. This allows more space to display a central image . The name was suggested by Dr. George Stanley, and first used by Elizabeth II of Canada...
, invented by Dr. George Stanley
George Stanley
Colonel George Francis Gillman Stanley, OC, CD, KStJ, DPhil, FRSC, FRHistS, FRHSC was a historian, author, soldier, teacher, public servant, and designer of the current Canadian flag.-Career:...
for the flag of Canada
Flag of Canada
The national flag of Canada, also known as the Maple Leaf, and , is a red flag with a white square in its centre, featuring a stylized 11-pointed red maple leaf. Its adoption in 1965 marked the first time a national flag had been officially adopted in Canada to replace the Union Flag...
, occupies fully half the field. On a 1:2 flag such as Canada's, it is square. The name was suggested by Sir Conrad Swan
Conrad Swan
Sir Conrad Marshall John Fisher Swan, was a long-serving officer of arms at the College of Arms in London. Having been first appointed to work at the College in 1962, he rose to the office of Garter Principal King of Arms in 1992, a position he held until 1995...
, and used when Elizabeth II of Canada proclaimed the new flag on 28 January 1965.http://www.middlesex-heraldry.org.uk/publications/seaxe/Seaxe52-200609.pdf

A pale is a picket (a piece of wood much taller than it is wide such as is used to build a picket fence
Picket fence
A picket fence is a variety of fence that has been used mostly for domestic boundaries. Until the introduction of advertising on fences in the 1980s, a Cricket field was also usually surrounded by a picket fence, giving rise to the expression rattling the pickets for a ball hit firmly into the...
) and it is from the resemblance to this that the heraldic pale derives its name.
The source of this article is wikipedia, the free encyclopedia.  The text of this article is licensed under the GFDL.