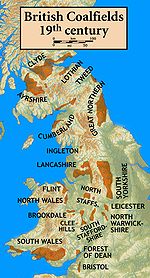 The Coal Measures formed during Westphalian and earliest Stephanian times in the Europe
Europe
Europe is, by convention, one of the world's seven continents. Comprising the westernmost peninsula of Eurasia, Europe is generally 'divided' from Asia to its east by the watershed divides of the Ural and Caucasus Mountains, the Ural River, the Caspian and Black Seas, and the waterways connecting...
an ('Heerlen') chronostratigraphical
Chronostratigraphy
Chronostratigraphy is the branch of stratigraphy that studies the age of rock strata in relation to time.The ultimate aim of chronostratigraphy is to arrange the sequence of deposition and the time of deposition of all rocks within a geological region, and eventually, the entire geologic record of...
scheme (which is approximately equivalent to the Middle Pennsylvanian
Pennsylvanian
The Pennsylvanian is, in the ICS geologic timescale, the younger of two subperiods of the Carboniferous Period. It lasted from roughly . As with most other geochronologic units, the rock beds that define the Pennsylvanian are well identified, but the exact date of the start and end are uncertain...
Series of the IUGS global chronostratigraphical scheme).

The term coal measures has also historically been used in other parts of the world for coal-bearing successions of various ages, e.g. the Permian
Permian
The PermianThe term "Permian" was introduced into geology in 1841 by Sir Sir R. I. Murchison, president of the Geological Society of London, who identified typical strata in extensive Russian explorations undertaken with Edouard de Verneuil; Murchison asserted in 1841 that he named his "Permian...
coal measures of Australia
Australia
Australia , officially the Commonwealth of Australia, is a country in the Southern Hemisphere comprising the mainland of the Australian continent, the island of Tasmania, and numerous smaller islands in the Indian and Pacific Oceans. It is the world's sixth-largest country by total area...
and the late Cretaceous
Cretaceous
The Cretaceous , derived from the Latin "creta" , usually abbreviated K for its German translation Kreide , is a geologic period and system from circa to million years ago. In the geologic timescale, the Cretaceous follows the Jurassic period and is followed by the Paleogene period of the...
and early Tertiary
Tertiary
The Tertiary is a deprecated term for a geologic period 65 million to 2.6 million years ago. The Tertiary covered the time span between the superseded Secondary period and the Quaternary...
coal measures found in New Zealand
New Zealand
New Zealand is an island country in the south-western Pacific Ocean comprising two main landmasses and numerous smaller islands. The country is situated some east of Australia across the Tasman Sea, and roughly south of the Pacific island nations of New Caledonia, Fiji, and Tonga...
. However, these usages are mostly informal.