Encyclopedia
The City of Port Adelaide Enfield was established on 1 January 1997 by the amalgamation of the City of Port Adelaide and the City of Enfield, and is one of the larger metropolitan
Metropolitan area
The term metropolitan area refers to a region consisting of a densely populated urban core and its less-populated surrounding territories, sharing industry, infrastructure, and housing. A metropolitan area usually encompasses multiple jurisdictions and municipalities: neighborhoods, townships,...
councils within South Australia
South Australia
South Australia is a state of Australia in the southern central part of the country. It covers some of the most arid parts of the continent; with a total land area of , it is the fourth largest of Australia's six states and two territories.South Australia shares borders with all of the mainland...
.

Extending from the River Torrens
River Torrens
The River Torrens is the most significant river of the Adelaide Plains and was one of the reasons for the siting of the city of Adelaide, capital of South Australia. It flows from its source in the Adelaide Hills near Mount Pleasant, across the Adelaide Plains, past the city centre and empties...
to Outer Harbor
Outer Harbor, South Australia
Outer Harbor is a north-western industrial suburb of Adelaide, South Australia, located at the northern tip of the Lefevre Peninsula; administratively, it lies in the City of Port Adelaide Enfield, 22 km from the Adelaide city centre. It is adjacent to Osborne, North Haven and Pelican Point...
, and covering an area of approximately 97 km², the City offers some of the South Australia's finest historical buildings and landmarks, together with a wealth of beautiful parks and excellent cultural and recreational facilities.

The current Mayor, elected in 2006, is Gary Johanson. There are 17 Ward Councillors who represent the residents and businesses of their wards at council meetings.

The Port Adelaide area is known as the History Precinct, as it is home to the Maritime Museum, the National Railway Museum and the Aviation Museum.

From the late 1830s to 1945, the area surrounding Port Adelaide was subdivided into many small district areas as owners bought, subdivided and sold areas of land. As the areas became smaller, and more landowners named their own estates, the number of these early “suburbs” reached 90. By the 1940s this was becoming a problem, so the Port Adelaide Council moved to reduce the number of local district areas to 18, in 1945. The boundaries and names of the suburbs were further stabilised when postcodes were introduced to Australia in 1967. 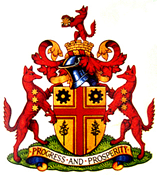 Plano, Texas
Plano, Texas
Plano is a city in the state of Texas, located mostly within Collin County. The city's population was 259,841 at the 2010 census, making it the ninth-largest city in Texas and the 71st most populous city in the United States. Plano is located within the metropolitan area commonly referred to as...
, United States
United States
The United States of America is a federal constitutional republic comprising fifty states and a federal district...
Malmö Stad
Malmö
Malmö , in the southernmost province of Scania, is the third most populous city in Sweden, after Stockholm and Gothenburg.Malmö is the seat of Malmö Municipality and the capital of Skåne County...
, Sweden
Sweden
Sweden , officially the Kingdom of Sweden , is a Nordic country on the Scandinavian Peninsula in Northern Europe. Sweden borders with Norway and Finland and is connected to Denmark by a bridge-tunnel across the Öresund....
Yantai
Yantai
Yantai is a prefecture-level city in northeastern Shandong province, People's Republic of China. Located on the southern coast of the Bohai Sea and the eastern coast of the Laizhou Bay, Yantai borders the cities of Qingdao and Weihai to the southwest and east respectively.The largest fishing...
, China
China
Chinese civilization may refer to:* China for more general discussion of the country.* Chinese culture* Greater China, the transnational community of ethnic Chinese.* History of China* Sinosphere, the area historically affected by Chinese culture...