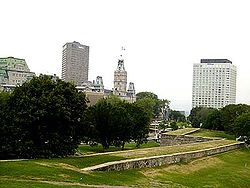 The Citadelle — the French name is used both in English and French — is a military installation and official residence
Official residence
An official residence is the residence at which heads of state, heads of government, gubernatorial or other senior figures officially reside...
located atop Cap Diamant
Cap Diamant
Cap Diamant is the official name of the cape and promontory on which Quebec City is located, formed by the confluence of a bend in the St. Lawrence River to the south and east, and the much smaller St. Charles River to the north....
, adjoining the Plains of Abraham
Plains of Abraham
The Plains of Abraham is a historic area within The Battlefields Park in Quebec City, Quebec, that was originally grazing land, but became famous as the site of the Battle of the Plains of Abraham, which took place on 13 September 1759. Though written into the history books, housing and minor...
in Quebec City
Quebec City
Quebec , also Québec, Quebec City or Québec City is the capital of the Canadian province of Quebec and is located within the Capitale-Nationale region. It is the second most populous city in Quebec after Montreal, which is about to the southwest...
, Quebec
Quebec
Quebec or is a province in east-central Canada. It is the only Canadian province with a predominantly French-speaking population and the only one whose sole official language is French at the provincial level....
, Canada
Canada
Canada is a North American country consisting of ten provinces and three territories. Located in the northern part of the continent, it extends from the Atlantic Ocean in the east to the Pacific Ocean in the west, and northward into the Arctic Ocean...
. This citadel
Citadel
A citadel is a fortress for protecting a town, sometimes incorporating a castle. The term derives from the same Latin root as the word "city", civis, meaning citizen....
is part of the fortifications of Quebec City.

The first protective wall (enceinte) was built in the 17th century under Louis de Buade, sieur de Frontenac. A plan of fortification
Fortification
Fortifications are military constructions and buildings designed for defence in warfare and military bases. Humans have constructed defensive works for many thousands of years, in a variety of increasingly complex designs...
s was developed by the French military engineer Jacques Levasseur de Néré (1662–1723) and approved by Louis XIV's commissary general of fortifications Sébastien Le Prestre de Vauban in 1701. Considerable work took place on the fortifications after the fall of Louisbourg in 1745 under the direction of military engineer Gaspard-Joseph Chaussegros de Léry.

The existing star-shaped fortifications
Star fort
A star fort, or trace italienne, is a fortification in the style that evolved during the age of gunpowder, when cannon came to dominate the battlefield, and was first seen in the mid-15th century in Italy....
were built by the United Kingdom between 1820 and 1831 under the direction of Lieutenant Colonel Elias Walker Durnford
Elias Walker Durnford
Major General Elias Walker Durnford R.E was the builder of the Citadel, Quebec City.Durnford was born in 1774 in Lowestoft, Norfolk. He was commissioned as a Second Lieutenant in the Corps of Royal Engineers on April 24, 1793. Durnford married Jane Sophia Mann on October 30, 1798...
of the Royal Engineers
Royal Engineers
The Corps of Royal Engineers, usually just called the Royal Engineers , and commonly known as the Sappers, is one of the corps of the British Army....
, and incorporated a section of the French enceinte (enclosure) of 1745. Their purpose was to secure the strategic heights of Cap Diamant against the Americans and to serve as a refuge for the British garrison in the event of attack or rebellion. The preservation of much of the fortifications and defences of Quebec is due to the intervention of Frederick Hamilton-Temple-Blackwood, 1st Marquess of Dufferin and Ava
Frederick Hamilton-Temple-Blackwood, 1st Marquess of Dufferin and Ava
Frederick Hamilton-Temple-Blackwood, 1st Marquess of Dufferin and Ava, KP, GCB, GCSI, GCMG, GCIE, PC was a British public servant and prominent member of Victorian society...
, Governor General of Canada
Governor General of Canada
The Governor General of Canada is the federal viceregal representative of the Canadian monarch, Queen Elizabeth II...
1872–1878, who also established the Citadelle as a vice-regal residence.

The Quebec Conferences
Quebec Conference, 1943
The First Quebec Conference was a highly secret military conference held during World War II between the British, Canadian and United States governments. The conference was held in Quebec City, August 17, 1943 – August 24, 1943. It took place at the Citadelle and at the Château Frontenac. The...
of 1943 and 1944, in which Winston Churchill
Winston Churchill
Sir Winston Leonard Spencer-Churchill, was a predominantly Conservative British politician and statesman known for his leadership of the United Kingdom during the Second World War. He is widely regarded as one of the greatest wartime leaders of the century and served as Prime Minister twice...
, Franklin D. Roosevelt, and William Lyon Mackenzie King
William Lyon Mackenzie King
William Lyon Mackenzie King, PC, OM, CMG was the dominant Canadian political leader from the 1920s through the 1940s. He served as the tenth Prime Minister of Canada from December 29, 1921 to June 28, 1926; from September 25, 1926 to August 7, 1930; and from October 23, 1935 to November 15, 1948...
discussed strategy for World War II
World War II
World War II, or the Second World War , was a global conflict lasting from 1939 to 1945, involving most of the world's nations—including all of the great powers—eventually forming two opposing military alliances: the Allies and the Axis...
, were held at the Citadelle of Quebec.

The Officer's Barracks, built in 1831 by the British Army
British Army
The British Army is the land warfare branch of Her Majesty's Armed Forces in the United Kingdom. It came into being with the unification of the Kingdom of England and Scotland into the Kingdom of Great Britain in 1707. The new British Army incorporated Regiments that had already existed in England...
, has been the residence of the Governor General of Canada
Governor General of Canada
The Governor General of Canada is the federal viceregal representative of the Canadian monarch, Queen Elizabeth II...
since 1871. The two storey Neoclassical
Neoclassical architecture
Neoclassical architecture was an architectural style produced by the neoclassical movement that began in the mid-18th century, manifested both in its details as a reaction against the Rococo style of naturalistic ornament, and in its architectural formulas as an outgrowth of some classicizing...
building was expanded and damaged by a fire in 1976.

Inside the building are various rooms:

The museum authenticates, classifies, evaluates and registers acquisitions received. The museum
collects, preserves and displays to the public, artifacts of Canadian military historical significance. Visitors are given guided tours of buildings 10 and 15, as well as the Royal 22e Régiment Museum, which features weapons, uniforms, and other military artifacts of the regiment. The Museum is affiliated with: CMA
Canadian Museums Association
The Canadian Museums Association is a national organization for the promotion of museums in Canada.The Canadian Museums Association is the national organization for the advancement of the Canadian museum sector, representing Canadian museum professionals both within Canada and internationally. The...
, CHIN
Canadian Heritage Information Network
The Canadian Heritage Information Network is a Canadian government-supported organization that provides a networked interface to Canada's heritage, largely through the World Wide Web. It aims to give access to Canada's heritage for both Canadians and a worldwide audience, by supporting the...
, OMMC
Organization of Military Museums of Canada
The Organization of Military Museums of Canada is a national organization for the promotion of military museums in Canada.The OMMC was established in 1967 by a group of military museums, historians, and military history enthusiasts. It has over 40 individual and 60 institutional members including...
and Virtual Museum of Canada
Virtual Museum of Canada
The Virtual Museum of Canada is Canada's national virtual museum. With a directory of over 3,000 Canadian heritage institutions and a database of over 600 virtual exhibits, the VMC brings together Canada's museums regardless of size or geographical location.The VMC includes virtual exhibits,...
.

The Quebec Parliament Building
Parliament Building (Quebec)
The Parliament Building is an eight-floor building and home to the Parliament of Quebec in Quebec City. The building was designed by architect Eugène-Étienne Taché and was built from 1877 to 1886. With the frontal tower, the building stands at 52 metres or 171 feet in height...
and many other provincial government buildings and several large hotels are also nearby, towering over this sunken or flat citadel, typical of late 18th century and early 19th century castramentation.