The Taíno
Taíno people
The Taínos were pre-Columbian inhabitants of the Bahamas, Greater Antilles, and the northern Lesser Antilles. It is thought that the seafaring Taínos are relatives of the Arawak people of South America...
word Cibao, meaning "place where rocks abound", was originally applied to the central mountain range, and used during the Spanish conquest to refer to the rich and fertile valley between the Central and Septentrional mountain ranges.

The Cibao region occupies the whole northern part of the Dominican territory. To the north and east of the region lies the Atlantic Ocean
Atlantic Ocean
The Atlantic Ocean is the second-largest of the world's oceanic divisions. With a total area of about , it covers approximately 20% of the Earth's surface and about 26% of its water surface area...
; to its west lies the Republic of Haiti
Haiti
Haiti , officially the Republic of Haiti , is a Caribbean country. It occupies the western, smaller portion of the island of Hispaniola, in the Greater Antillean archipelago, which it shares with the Dominican Republic. Ayiti was the indigenous Taíno or Amerindian name for the island...
and to the south the Central Range, which separates Cibao from the other natural regions. The cibao has a population of 5,622,378 in 2009. 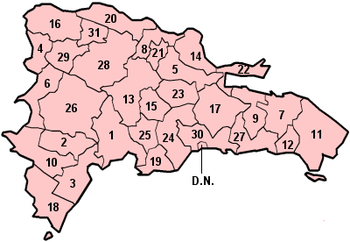 Two of the largest rivers of the country are located inside this region: the Yaque del Norte, the largest river of the Dominican Republic
Dominican Republic
The Dominican Republic is a nation on the island of La Hispaniola, part of the Greater Antilles archipelago in the Caribbean region. The western third of the island is occupied by the nation of Haiti, making Hispaniola one of two Caribbean islands that are shared by two countries...
, and the Yuna
Yuna River
The Yuna River is in the Dominican Republic. The river flooded in 2000 and 2004 causing loss of life and livelihood. The river is the second longest river in the Dominican Republic measuring at 209 km long....
river. Both of these rivers contain several chains of dams used to provide the region with water for irrigation (since agriculture is the main activity of the area) and hydroelectric energy. Rice
Rice
Rice is the seed of the monocot plants Oryza sativa or Oryza glaberrima . As a cereal grain, it is the most important staple food for a large part of the world's human population, especially in East Asia, Southeast Asia, South Asia, the Middle East, and the West Indies...
, coffee
Coffee
Coffee is a brewed beverage with a dark,init brooo acidic flavor prepared from the roasted seeds of the coffee plant, colloquially called coffee beans. The beans are found in coffee cherries, which grow on trees cultivated in over 70 countries, primarily in equatorial Latin America, Southeast Asia,...
and cacao are the most important crops grown in the area.

The central mountain range also has important mining activity. Its main mineral resources include gold
Gold
Gold is a chemical element with the symbol Au and an atomic number of 79. Gold is a dense, soft, shiny, malleable and ductile metal. Pure gold has a bright yellow color and luster traditionally considered attractive, which it maintains without oxidizing in air or water. Chemically, gold is a...
, iron
Iron
Iron is a chemical element with the symbol Fe and atomic number 26. It is a metal in the first transition series. It is the most common element forming the planet Earth as a whole, forming much of Earth's outer and inner core. It is the fourth most common element in the Earth's crust...
and nickel
Nickel
Nickel is a chemical element with the chemical symbol Ni and atomic number 28. It is a silvery-white lustrous metal with a slight golden tinge. Nickel belongs to the transition metals and is hard and ductile...
, among others. The internationally known Falconbridge
Falconbridge Ltd.
Falconbridge Limited was a Toronto, Ontario-based natural resources company with operations in 18 countries, involved in the exploration, mining, processing, and marketing of metal and mineral products, including nickel, copper, cobalt, and platinum. It was listed on the TSX and NYSE , and had...
is the company in charge of the extraction of these ores.

The Atlantic coast of the country is well known for having beautiful beaches. Several tourist centers have developed along the coast of the region, among them Sosúa
Sosúa
Sosúa is a small town in the Puerto Plata province of the Dominican Republic. Located approximately from the Puerto Plata International Airport , the town is accessed primarily by Camino Cinco, or Highway 5, which runs much of the length of the country's North coastline...
, originally a very small Jewish community established in the 1940s; Cabarete
Cabarete
Cabarete is a town in the Puerto Plata province of the Dominican Republic, noted for its tourism and beaches. It was founded in 1835 by Zephaniah Kingsley along with his mixed-race family, and 53 slaves he freed from his Florida plantations and brought here while the island was under Haitian...
, one of the most important centers in the Caribbean for international surfing competitions; and most recently Samaná
Samaná
Samaná is a province of the Dominican Republic. Its capital is Santa Bárbara de Samaná, usually known as Samaná.Samaná is located on the coast of the Atlantic Ocean in the northeastern part of the Dominican Republic. It is known for its mountains of which it is almost entirely formed...
, ideal for eco-tourism and whale watching.

The valley is not only a geographical unit, but also a cultural and linguistic unit. A typical dialect of Spanish
Spanish language
Spanish , also known as Castilian , is a Romance language in the Ibero-Romance group that evolved from several languages and dialects in central-northern Iberia around the 9th century and gradually spread with the expansion of the Kingdom of Castile into central and southern Iberia during the...
is spoken in the area, including several regional idiomatic phrases, expressions, and a particular way of speaking. A "cibaeño" can be identified because of his substitution of the "R" and "L" phonetic sounds at the end of syllables for short "I" sounds while speaking. Many linguistics are suggesting that the Spanish dialect that is being spoken in the area, can be classified as a Creole language
Creole language
A creole language, or simply a creole, is a stable natural language developed from the mixing of parent languages; creoles differ from pidgins in that they have been nativized by children as their primary language, making them have features of natural languages that are normally missing from...
.

The genre of Merengue
Merengue music
Merengue is a type of music and dance from the Dominican Republic. It is popular in the Dominican Republic and all over Latin America. Its name is Spanish, taken from the name of the meringue, a dessert made from whipped egg whites and sugar...
is played using the Güira
Güira
A güira is a percussion instrument from the Dominican Republic, generally used in merengue, bachata, and its subgenres, that sounds like a maraca or hi-hat but in fact is a sheet of metal—in practice, often from a five gallon oil can—evenly perforated with a nail, shaped into a cylinder or...
, Tambora (drum) and Accordion
Accordion
The accordion is a box-shaped musical instrument of the bellows-driven free-reed aerophone family, sometimes referred to as a squeezebox. A person who plays the accordion is called an accordionist....
, originates in the Cibao region. This type of merengue is played by the Perico Ripiao, which are typical local musical groups. This latter name is also often used to refer to the musical genre itself.

During Late January and through February, several carnivals are held within the region. The most popular of these festivals belongs to the province of La Vega, and dates back to the first European settlements. It began as a religious activity celebrating the pre-Lent season, and the carnival's theme revolves around the victory of good over evil.

Many important Dominican patriots were of cibaeño origin. Among the most important are local generals Santiago Rodríguez and Gregorio Luperón
Gregorio Luperón
Gregorio Luperón , is best known for being a Dominican military and state leader who was the main leader in the restoration of the Dominican Republic after the Spanish annexation in 1863....
, who were responsible for the restoration of the Republic in the later decades of the 1800s. During the Trujillo dictatorship, the Mirabal sisters
Mirabal sisters
The Mirabal sisters were four Dominican political dissidents who opposed the dictatorship of Rafael Trujillo. Three of the sisters were assassinated by unknown persons...
arranged clandestine organizations to rebel against the anarchy. The sisters were brutally murdered in 1960, and remain today as some of the biggest martyrs on behalf of the Dominican nation.
The source of this article is wikipedia, the free encyclopedia.  The text of this article is licensed under the GFDL.