Encyclopedia
The Church of the Nativity in Bethlehem
Bethlehem
Bethlehem is a Palestinian city in the central West Bank of the Jordan River, near Israel and approximately south of Jerusalem, with a population of about 30,000 people. It is the capital of the Bethlehem Governorate of the Palestinian National Authority and a hub of Palestinian culture and tourism...
is one of the oldest continuously operating churches in the world. The structure is built over the cave that tradition
Sacred Tradition
Sacred Tradition or Holy Tradition is a theological term used in some Christian traditions, primarily in the Roman Catholic, Anglican, Eastern Orthodox and Oriental Orthodox traditions, to refer to the fundamental basis of church authority....
marks as the birthplace
Nativity of Jesus
The Nativity of Jesus, or simply The Nativity, refers to the accounts of the birth of Jesus in two of the Canonical gospels and in various apocryphal texts....
of Jesus of Nazareth, and thus it is considered sacred by Christians. The site is also revered by followers of Islam
Islam
Islam . The most common are and .   : Arabic pronunciation varies regionally. The first vowel ranges from ~~. The second vowel ranges from ~~~...
(see Jesus in Islam).

The antiquity of this tradition is attested by the Christian apologist Justin Martyr
Justin Martyr
Justin Martyr, also known as just Saint Justin , was an early Christian apologist. Most of his works are lost, but two apologies and a dialogue survive. He is considered a saint by the Roman Catholic Church and the Eastern Orthodox Church....
(c. 100 - 165), who noted in his Dialogue with Trypho that the Holy Family
Holy Family
The Holy Family consists of the Child Jesus, the Virgin Mary, and Saint Joseph.The Feast of the Holy Family is a liturgical celebration in the Roman Catholic Church in honor of Jesus of Nazareth, his mother, the Blessed Virgin Mary, and his foster father, Saint Joseph, as a family...
had taken refuge in a cave outside of town:

Joseph took up his quarters in a certain cave near the village; and while they were there Mary brought forth the Christ and placed Him in a manger, and here the Magi who came from Arabia found Him.(chapter LXXVIII).

Origen
Origen
Origen , or Origen Adamantius, 184/5–253/4, was an early Christian Alexandrian scholar and theologian, and one of the most distinguished writers of the early Church. As early as the fourth century, his orthodoxy was suspect, in part because he believed in the pre-existence of souls...
of Alexandria (185 AD–ca. 254) wrote:

In Bethlehem the cave is pointed out where He was born, and the manger in the cave where He was wrapped in swaddling clothes. And the rumor is in those places, and among foreigners of the Faith, that indeed Jesus was born in this cave who is worshipped and reverenced by the Christians. (Contra Celsum, book I, chapter LI).

The first basilica
Basilica
The Latin word basilica , was originally used to describe a Roman public building, usually located in the forum of a Roman town. Public basilicas began to appear in Hellenistic cities in the 2nd century BC.The term was also applied to buildings used for religious purposes...
on this site was begun by Saint Helena
Helena of Constantinople
Saint Helena also known as Saint Helen, Helena Augusta or Helena of Constantinople was the consort of Emperor Constantius, and the mother of Emperor Constantine I...
, the mother of the Emperor Constantine I
Constantine I
Constantine the Great , also known as Constantine I or Saint Constantine, was Roman Emperor from 306 to 337. Well known for being the first Roman emperor to convert to Christianity, Constantine and co-Emperor Licinius issued the Edict of Milan in 313, which proclaimed religious tolerance of all...
. Under the supervision of Bishop Makarios of Jerusalem, the construction started in 327 and was completed in 333. That structure was burnt down in the Samaritan Revolt
Julianus ben Sabar
Julianus ben Sabar was a messianic leader of the Samaritans, who led a failed revolt against Byzantium during the early 6th century....
of 529.

The current basilica was rebuilt in its present form in 565 by the Emperor Justinian I
Justinian I
Justinian I ; , ; 483– 13 or 14 November 565), commonly known as Justinian the Great, was Byzantine Emperor from 527 to 565. During his reign, Justinian sought to revive the Empire's greatness and reconquer the lost western half of the classical Roman Empire.One of the most important figures of...
. When the Persians
Sassanid Empire
The Sassanid Empire , known to its inhabitants as Ērānshahr and Ērān in Middle Persian and resulting in the New Persian terms Iranshahr and Iran , was the last pre-Islamic Persian Empire, ruled by the Sasanian Dynasty from 224 to 651...
under Chosroes II
Khosrau II
250px|thumb|Khosrau II 250px|thumb|Khosrau II 250px|thumb|Khosrau II (Khosrow II, Chosroes II, or Xosrov II in classical sources, sometimes called Parvez, "the Ever Victorious" – (in Persian: خسرو پرویز), was the twenty-second Sassanid King of Persia, reigning from 590 to 628...
invaded in 614, they unexpectedly did not destroy the structure. According to legend, their commander Shahrbaraz
Shahrbaraz
Shahrbaraz or Shahrwaraz was a general, with the rank of Eran Spahbod under Khosrau II . His name was Farrokhan, and Shahrbaraz was his title...
was moved by the depiction inside the church of the Three Magi wearing Persian clothing, and commanded that the building be spared. The Crusaders
Crusaders
The Crusaders are a New Zealand professional rugby union team based in Christchurch that competes in the Super Rugby competition. They are the most successful team in Super Rugby history with seven titles...
made further repairs and additions to the building during the Latin Kingdom of Jerusalem
Kingdom of Jerusalem
The Kingdom of Jerusalem was a Catholic kingdom established in the Levant in 1099 after the First Crusade. The kingdom lasted nearly two hundred years, from 1099 until 1291 when the last remaining possession, Acre, was destroyed by the Mamluks, but its history is divided into two distinct periods....
with permission and help given by the Byzantine Emperor, and the first King of Jerusalem
Baldwin I of Jerusalem
Baldwin I of Jerusalem, formerly Baldwin I of Edessa, born Baldwin of Boulogne , 1058? – 2 April 1118, was one of the leaders of the First Crusade, who became the first Count of Edessa and then the second ruler and first titled King of Jerusalem...
was crowned in the church. Over the years, the compound has been expanded, and today it covers approximately 12,000 square meters. The church was one of the direct causes for French involvement in the Crimean War
Crimean War
The Crimean War was a conflict fought between the Russian Empire and an alliance of the French Empire, the British Empire, the Ottoman Empire, and the Kingdom of Sardinia. The war was part of a long-running contest between the major European powers for influence over territories of the declining...
against Russia
Russian Empire
The Russian Empire was a state that existed from 1721 until the Russian Revolution of 1917. It was the successor to the Tsardom of Russia and the predecessor of the Soviet Union...
.

The church is administered jointly by Roman Catholic, Greek Orthodox and Armenian Apostolic authorities. All three traditions maintain monastic communities on the site.

The structure is actually a combination of two churches, with a crypt beneath—the Grotto
Grotto
A grotto is any type of natural or artificial cave that is associated with modern, historic or prehistoric use by humans. When it is not an artificial garden feature, a grotto is often a small cave near water and often flooded or liable to flood at high tide...
of the Nativity—where Jesus
Jesus
Jesus of Nazareth , commonly referred to as Jesus Christ or simply as Jesus or Christ, is the central figure of Christianity...
was born: 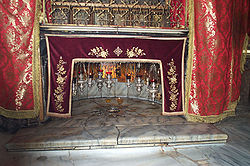 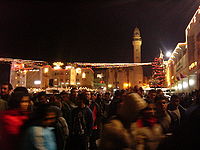 The Greek Orthodox Patriarchate of Jerusalem and the Armenian Apostolic Church follow the Julian Calendar
Julian calendar
The Julian calendar began in 45 BC as a reform of the Roman calendar by Julius Caesar. It was chosen after consultation with the astronomer Sosigenes of Alexandria and was probably designed to approximate the tropical year .The Julian calendar has a regular year of 365 days divided into 12 months...
liturgically, whereas the Roman Catholic Church follows the modern Gregorian Calendar
Gregorian calendar
The Gregorian calendar, also known as the Western calendar, or Christian calendar, is the internationally accepted civil calendar. It was introduced by Pope Gregory XIII, after whom the calendar was named, by a decree signed on 24 February 1582, a papal bull known by its opening words Inter...
. Thus Christmas Eve services for the Eastern and Western confessions will be held on different days. The Roman Catholic Church will celebrate the Nativity on December 25; the Orthodox Church will celebrate the Nativity on January 7.

The present state of the church is worrying. Many roof timbers are rotting, and have not been replaced since the 19th century. The rainwater that seeps into the building not only accelerates the rotting of the wood and damages the structural integrity of the building, but also damages the 12th-century wall mosaics and paintings. The influx of water also means that there is an ever-present chance of an electrical fire. If another earthquake were to occur on the scale of the one of 1834, the result would most likely be catastrophic. ... It is hoped that the listing will encourage its preservation, including getting the three custodians of the church - the Greek Orthodox Church, the Armenian Orthodox Church, and the Franciscan order - to work together, which has not happened for hundreds of years. The Israeli government and the Palestinian Authority would also have to work together to protect it.

In 2010, the Palestinian Authority announced that a multi-million dollar restoration program was imminent.

According to some scholars, the church is built over a cave that was originally a shrine to Adonis-Tammuz.

The Church Father Jerome, who died in Bethlehem in 420, reports in addition that the holy cave was at one point consecrated by the heathen to the worship of Adonis, and a pleasant sacred grove planted before it, to wipe out the memory of Jesus. Modern mythologists, however, reverse the supposition, insisting that the cult of Adonis-Tammuz originated the shrine and that it was the Christians who took it over, substituting the worship of their own God.