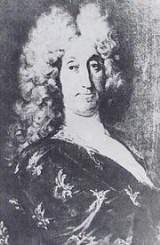 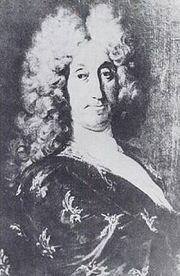 Christoph von Graffenried (1661, Worb
Worb
Worb is a municipality in the Bern-Mittelland administrative district in the canton of Bern in Switzerland.-Geography:Worb has an area of . Of this area, 64.1% is used for agricultural purposes, while 21.1% is forested...
, Canton of Bern – 1743) led a group of Swiss and Palatine Germans to North Carolina in 1705, and later authored Relation of My American Project, an account of the establishment of this colony in the New World
New World
The New World is one of the names used for the Western Hemisphere, specifically America and sometimes Oceania . The term originated in the late 15th century, when America had been recently discovered by European explorers, expanding the geographical horizon of the people of the European middle...
.

The well-to-do patrician family originally established themselves in the neighborhood of Bern at the time of the founding of the city on the Aar river in 1191 by Berchtold V, Duke of Zaringen.

Christoph von Graffenried was born November 15, 1661 at the family home, Schloss Worb, in Worb
Worb
Worb is a municipality in the Bern-Mittelland administrative district in the canton of Bern in Switzerland.-Geography:Worb has an area of . Of this area, 64.1% is used for agricultural purposes, while 21.1% is forested...
, in the German-speaking part of the Canton
Cantons of Switzerland
The 26 cantons of Switzerland are the member states of the federal state of Switzerland. Each canton was a fully sovereign state with its own borders, army and currency from the Treaty of Westphalia until the establishment of the Swiss federal state in 1848...
of Bern
Canton of Berne
The Canton of Bern is the second largest of the 26 Swiss cantons by both surface area and population. Located in west-central Switzerland, it borders the Canton of Jura and the Canton of Solothurn to the north. To the west lie the Canton of Neuchâtel, the Canton of Fribourg and Vaud. To the south...
in Switzerland
Switzerland
Switzerland name of one of the Swiss cantons. ; ; ; or ), in its full name the Swiss Confederation , is a federal republic consisting of 26 cantons, with Bern as the seat of the federal authorities. The country is situated in Western Europe,Or Central Europe depending on the definition....
, the eldest son of Anton von Graffenried (1639–1730) and Katarina Jenner (? -1669).

On April 25th, 1684, Graffenried married Regina Tscharner (1665–1731). Regina also came from an accomplished and respected family, her father, Beat Lewis Tscharner, having been a member of the Assembly and her grandfather, Samuel Tscharner, having been Governor and later Mayor of Chillon. Regina and Christoph had four sons and seven daughters. In 1702, he acquired the position as bailiff
Bailiff
A bailiff is a governor or custodian ; a legal officer to whom some degree of authority, care or jurisdiction is committed...
of Yverdon.

Graffenried met Franz Ludwig Michel who had discovered silver mines in Virginia
Virginia
The Commonwealth of Virginia , is a U.S. state on the Atlantic Coast of the Southern United States. Virginia is nicknamed the "Old Dominion" and sometimes the "Mother of Presidents" after the eight U.S. presidents born there...
and owned land in the New World
New World
The New World is one of the names used for the Western Hemisphere, specifically America and sometimes Oceania . The term originated in the late 15th century, when America had been recently discovered by European explorers, expanding the geographical horizon of the people of the European middle...
. He told Graffenried what glorious places North Carolina
North Carolina
North Carolina is a state located in the southeastern United States. The state borders South Carolina and Georgia to the south, Tennessee to the west and Virginia to the north. North Carolina contains 100 counties. Its capital is Raleigh, and its largest city is Charlotte...
and Virginia were and he advised him to move to North Carolina. With the idea of paying off his debts and making money on the cheap land in North Carolina, Graffenried left his debts to his father and secretly departed for London
London
London is the capital city of :England and the :United Kingdom, the largest metropolitan area in the United Kingdom, and the largest urban zone in the European Union by most measures. Located on the River Thames, London has been a major settlement for two millennia, its history going back to its...
so that he could see this New World.

When in London, Graffenried had met with John Lawson who was publishing a book entitled A Voyage to Carolina. Lawson was the Surveyor General of North Carolina. Lawson promised to show Graffenried and his settlers a perfect place to establish a community. In 1709, Graffenried then met with the Lords Proprietors of Carolina who granted to him ten thousand acres (40 km²) on the Neuse
Neuse River
The Neuse River is a river rising in the Piedmont of North Carolina and emptying into Pamlico Sound below New Bern. Its total length is approximately , making it the longest river entirely contained in North Carolina. The Trent River joins it at New Bern. Its drainage basin, measuring in area,...
and Cape Fear River
Cape Fear River
The Cape Fear River is a long blackwater river in east central North Carolina in the United States. It flows into the Atlantic Ocean near Cape Fear, from which it takes its name. The overall water quality of the river is continuously measured and monitored by and conducted by the , , and the...
s. The also gave him the title Baron
Baron
Baron is a title of nobility. The word baron comes from Old French baron, itself from Old High German and Latin baro meaning " man, warrior"; it merged with cognate Old English beorn meaning "nobleman"...
of Bernberg, after the settlement he was supposed to found. Consequently, Graffenried gathered a group of German
Ethnic German
Ethnic Germans historically also ), also collectively referred to as the German diaspora, refers to people who are of German ethnicity. Many are not born in Europe or in the modern-day state of Germany or hold German citizenship...
s from the Palatine
Rhineland-Palatinate
Rhineland-Palatinate is one of the 16 states of the Federal Republic of Germany. It has an area of and about four million inhabitants. The capital is Mainz. English speakers also commonly refer to the state by its German name, Rheinland-Pfalz ....
region and Swiss immigrants. They had faced hardships in their own countries and wanted to start over in North Carolina. He sailed to North Carolina in 1710. On the sea, the settlers were attacked by French privateers who stripped them of everything they brought.

Once in the New World, the settlers sold everything that remained, except the clothes on their backs. John Lawson took them to a site at the junction of the Trent and Neuse Rivers, which they named New Bern. The first season, the settler's crops did not do well. Graffenried returned to Europe
Europe
Europe is, by convention, one of the world's seven continents. Comprising the westernmost peninsula of Eurasia, Europe is generally 'divided' from Asia to its east by the watershed divides of the Ural and Caucasus Mountains, the Ural River, the Caspian and Black Seas, and the waterways connecting...
to get supplies and additional settlers. He returned to the colony unscathed.

In addition to a lack of food and supplies, there was great tension between the settlers and the Tuscarora Indians of the Neuse River
Neuse River
The Neuse River is a river rising in the Piedmont of North Carolina and emptying into Pamlico Sound below New Bern. Its total length is approximately , making it the longest river entirely contained in North Carolina. The Trent River joins it at New Bern. Its drainage basin, measuring in area,...
region. Unknown to the settlers, their new settlement was on the site of an old Tuscarora
Tuscarora (tribe)
The Tuscarora are a Native American people of the Iroquoian-language family, with members in New York, Canada, and North Carolina...
Indian
Native Americans in the United States
Native Americans in the United States are the indigenous peoples in North America within the boundaries of the present-day continental United States, parts of Alaska, and the island state of Hawaii. They are composed of numerous, distinct tribes, states, and ethnic groups, many of which survive as...
village. In 1711, Graffenried and the settlers evicted a group of Tuscarora from nearby lands without payment, and Graffenried assumed the title "Landgrave of Carolina." Retaliatory raids by the Tuscarora, under a leader named Hancock, led to deaths and damage to the settlement.

During the summer of 1711, Graffenried, along with John Lawson, took a trip up the Neuse River
Neuse River
The Neuse River is a river rising in the Piedmont of North Carolina and emptying into Pamlico Sound below New Bern. Its total length is approximately , making it the longest river entirely contained in North Carolina. The Trent River joins it at New Bern. Its drainage basin, measuring in area,...
. Graffenried wanted to crossbreed European grapes with wild, native grapes and start a vineyard. The Tuscarora Indians took Graffenried and John Lawson (and a slave who was carrying the baggage) captive.

Graffenried had lost his fortune and returned to Bern, Switzerland in 1714. Graffenried was penniless and owed a great deal of money to the people of North Carolina. He sold his part in the North Carolina town to Thomas Pollock for 800 pounds. In an attempt to pay off his debts, Graffenried soon wrote a book entitled "Relation" as an apology and explanation as to why his settlement failed. He included several documents, among them a letter written to the governor of North Carolina and a layout of the settlement of New Bern. An artist, he included sketches of early colonial North Carolina. Graffenried also talked about how Lawson brought his death upon himself. He said that Lawson was a money grubbing land speculator and that he thought Lawson wanted the colony to fail because he was the one that told them about the land. Graffenried died unhappy and in debt in 1743.