Pavilions are known to have been built as early as the Zhou Dynasty
Zhou Dynasty
The Zhou Dynasty was a Chinese dynasty that followed the Shang Dynasty and preceded the Qin Dynasty. Although the Zhou Dynasty lasted longer than any other dynasty in Chinese history, the actual political and military control of China by the Ji family lasted only until 771 BC, a period known as...
(1046–256 BCE), although no examples of that period remain today. The first use of the Chinese character
Chinese character
Chinese characters are logograms used in the writing of Chinese and Japanese , less frequently Korean , formerly Vietnamese , or other languages...
for pavilion dates to the Spring and Autumn Period (722–481 BCE) and the Warring States Period
Warring States Period
The Warring States Period , also known as the Era of Warring States, or the Warring Kingdoms period, covers the Iron Age period from about 475 BC to the reunification of China under the Qin Dynasty in 221 BC...
(403–221 BCE). During the Han Dynasty
Han Dynasty
The Han Dynasty was the second imperial dynasty of China, preceded by the Qin Dynasty and succeeded by the Three Kingdoms . It was founded by the rebel leader Liu Bang, known posthumously as Emperor Gaozu of Han. It was briefly interrupted by the Xin Dynasty of the former regent Wang Mang...
(202 BCE–220 CE) they were used as watchtowers and local government buildings. These multi-story constructions had at least one floor without surrounding walls to allow observation of the surroundings.

During the Sui
Sui Dynasty
The Sui Dynasty was a powerful, but short-lived Imperial Chinese dynasty. Preceded by the Southern and Northern Dynasties, it ended nearly four centuries of division between rival regimes. It was followed by the Tang Dynasty....
(581–618) and Tang
Tang Dynasty
The Tang Dynasty was an imperial dynasty of China preceded by the Sui Dynasty and followed by the Five Dynasties and Ten Kingdoms Period. It was founded by the Li family, who seized power during the decline and collapse of the Sui Empire...
(618–907) dynasties wealthy officials and scholars incorporated pavilions into their personal gardens. During this period the function of pavilions shifted from the practical to the aesthetic
Aesthetics
Aesthetics is a branch of philosophy dealing with the nature of beauty, art, and taste, and with the creation and appreciation of beauty. It is more scientifically defined as the study of sensory or sensori-emotional values, sometimes called judgments of sentiment and taste...
. Pavilions provided a place to sit and enjoy the scenery, and they also became a part of the scenery itself, being attractive structures. Brush-and-ink landscape scrolls of the Song Dynasty
Song Dynasty
The Song Dynasty was a ruling dynasty in China between 960 and 1279; it succeeded the Five Dynasties and Ten Kingdoms Period, and was followed by the Yuan Dynasty. It was the first government in world history to issue banknotes or paper money, and the first Chinese government to establish a...
(960–1279) show the isolated pavilions of scholar hermits in mountainous regions. Under the impetus of scholarly tastes for the simplicity of a rustic life, while previously pavilions were constructed from stone, other materials such as bamboo, grass and wood came into use. 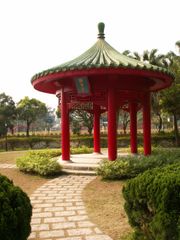 Pavilions are often classified according to their shape when viewed from above. Round, square, hexagonal and octagonal pavilions are common, while more unusual designs also exist such as the Nanhai Pavilion located at the Temple of Heaven
Temple of Heaven
The Temple of Heaven, literally the Altar of Heaven is a complex of Taoist buildings situated in the southeastern part of central Beijing. The complex was visited by the Emperors of the Ming and Qing dynasties for annual ceremonies of prayer to Heaven for good harvest...
in Beijing
Beijing
Beijing , also known as Peking , is the capital of the People's Republic of China and one of the most populous cities in the world, with a population of 19,612,368 as of 2010. The city is the country's political, cultural, and educational center, and home to the headquarters for most of China's...
, which consists of two round pavilions joined together.

While the name is commonly believed to be related to its purpose as a place to stay and rest (Chinese
Chinese language
The Chinese language is a language or language family consisting of varieties which are mutually intelligible to varying degrees. Originally the indigenous languages spoken by the Han Chinese in China, it forms one of the branches of Sino-Tibetan family of languages...
停留休息, pinyin
Pinyin
Pinyin is the official system to transcribe Chinese characters into the Roman alphabet in China, Malaysia, Singapore and Taiwan. It is also often used to teach Mandarin Chinese and spell Chinese names in foreign publications and used as an input method to enter Chinese characters into...
tínglíuxīuxí), the fact that the earliest pavilions were used for military and governmental purposes casts doubt on this interpretation.
The source of this article is wikipedia, the free encyclopedia.  The text of this article is licensed under the GFDL.