The Chekhov Gymnasium in Taganrog
Taganrog
Taganrog is a seaport city in Rostov Oblast, Russia, located on the north shore of Taganrog Bay , several kilometers west of the mouth of the Don River. Population: -History of Taganrog:...
on Ulitsa Oktyabrskaya 9 (formerly Gymnasicheskaya Street) is the oldest gymnasium
Gymnasium (school)
A gymnasium is a type of school providing secondary education in some parts of Europe, comparable to English grammar schools or sixth form colleges and U.S. college preparatory high schools. The word γυμνάσιον was used in Ancient Greece, meaning a locality for both physical and intellectual...
in the South of Russia
Russia
Russia or , officially known as both Russia and the Russian Federation , is a country in northern Eurasia. It is a federal semi-presidential republic, comprising 83 federal subjects...
. Playwright and short-story writer Anton Chekhov
Anton Chekhov
Anton Pavlovich Chekhov was a Russian physician, dramatist and author who is considered to be among the greatest writers of short stories in history. His career as a dramatist produced four classics and his best short stories are held in high esteem by writers and critics...
spent 11 years in the school, which was later named after him and transformed into a literary museum. Visitors can see Anton's desk and his classroom, the assembly hall and even the punishment cell which he sometimes visited.


History of the school

The Boys Gymnasium was founded in 1809 and this building was completed in 1843 by the plans of the Italian architect Francesco Boffo
Francesco Boffo
Francesco Carlo Boffo was a Sardinian-born Neoclassical architect who designed more than 30 buildings in Odessa between 1818 and 1861, including the famous Potemkin Stairs....
. Students of the Boys Gymnasium benefited from various grants, most of them being introduced by the Greek-Russian merchant and benefactor Ioannis Varvakis
Ioannis Varvakis
Ioannis Varvakis , also known as Ivan Andreevich Varvatsi , was a distinguished member of the Russian and Greek communities, national hero, member of the Filiki Eteria and benefactor of the places where he lived.-Origins, early life:...
(1745–1825). In mid 1870s a school church was made in the same building, and the cross may be seen on some old postcards.

After the Russian Revolution of 1917
Russian Revolution of 1917
The Russian Revolution is the collective term for a series of revolutions in Russia in 1917, which destroyed the Tsarist autocracy and led to the creation of the Soviet Union. The Tsar was deposed and replaced by a provisional government in the first revolution of February 1917...
and the following Civil War, the building housed a cavalry
Cavalry
Cavalry or horsemen were soldiers or warriors who fought mounted on horseback. Cavalry were historically the third oldest and the most mobile of the combat arms...
school (6th Cavalry College), frequently visited by Semyon Budyonny
Semyon Budyonny
Semyon Mikhailovich Budyonny , sometimes transliterated as Budennyj, Budyonnyy, Budennii, Budenny, Budyoni, Budyenny, or Budenny, was a Soviet cavalryman, military commander, politician and a close ally of Soviet leader Joseph Stalin.-Early life:...
, Klim Voroshilov and Efim Shadenko.

In 1975 opened as The Literary Museum named after Anton Chekhov, more commonly known under the short name Chekhov Gymnasium.

January 29, 2010 President of Russian Federation Dmitri Medvedev held a meeting with representatives of the Russian and foreign theatrical communities in Taganrog at the stateroom of the Chekhov Gymnasium literary museum. 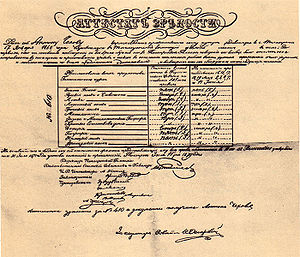 Anton Chekhov
Anton Chekhov
Anton Pavlovich Chekhov was a Russian physician, dramatist and author who is considered to be among the greatest writers of short stories in history. His career as a dramatist produced four classics and his best short stories are held in high esteem by writers and critics...
attended a school for Greek boys in Taganrog (1866-1868), and at the age of eight he was sent to the local grammar school (Gymnasium) where he proved an average pupil. Rather reserved and undemonstrative, he nevertheless gained a reputation for satirical comments, for pranks, and for making up humorous nicknames for his teachers. He enjoyed playing in amateur theatricals and often attended performances at the Taganrog Theatre
Taganrog Theatre
The Taganrog Drama Theater named after Anton Chekhov and decorated with Order of Honor was established in 1827 by governor Alexander Dunaev. The theater was subsidized by the Taganrog's City Council since 1828, and its first director was Alexander Gor...
. As an adolescent he tried his hand at writing short "anecdotes," amusing or funny stories, although he is also known to have written a serious long play at this time, "Fatherless," which he later destroyed. He received an annual grant of 300 rubles which had been introduced by the Taganrog City Council after the failed assassination attempt on the tsar Alexander II of Russia
Alexander II of Russia
Alexander II , also known as Alexander the Liberator was the Emperor of the Russian Empire from 3 March 1855 until his assassination in 1881...
.

The maths rating on Chekhov's school-leaving certificate was signed by Edmund Dzerzhinsky, father of the revolutionary Felix Dzerzhinsky. Dzerzhinsky gave lessons of mathematics in two of Taganrog
Taganrog
Taganrog is a seaport city in Rostov Oblast, Russia, located on the north shore of Taganrog Bay , several kilometers west of the mouth of the Don River. Population: -History of Taganrog:...
's gymnasiums - the Girls Gymnasium of Empr. Maria
Mariinskaya Gymnasium
The Mariinskaya Gymnasium in Taganrog on Chekhov Str. 104 - currently school No. 15 of the North Caucasus Railway – originated from two oldest educational establishments in the South of Russia: the Mariinskaya Gymnasium for Girls and the Railway Vocational School.- History of Gymnasium :The...
(Мариинская женская гимназия) in 1868-1873 and in the Boys Gymnasium from 1873 until late seventies. Another contemporary instructor was Fyodor Pokrovski (Федор Платонович Покровский), who taught Chekhov theology and gave him the famous nickname Antosha Chekhonte (Антоша Чехонте).

Today the Gymnasium is open to public as The Literary Museum named after Anton Chekhov (Литературный музей А.П.Чехова). After the famous Pushkin House
Pushkin House
The Pushkin House is the familiar name of the Institute of Russian Literature in St. Petersburg. It is part of a network of institutions affiliated with the Russian Academy of Sciences.- Establishment :...
museum in Saint Petersburg
Saint Petersburg
Saint Petersburg is a city and a federal subject of Russia located on the Neva River at the head of the Gulf of Finland on the Baltic Sea...
, this is the second-largest literary museum in Russia
Russia
Russia or , officially known as both Russia and the Russian Federation , is a country in northern Eurasia. It is a federal semi-presidential republic, comprising 83 federal subjects...
both in terms of space and unique funds. The exhibition includes the library that consists of the antique books of the time and books later sent by Anton Chekhov, his personal belongings, photographs, documents, autographs by Chekhov and other famous people - friends of the writer.