Encyclopedia
A charge is a maneuver in battle
Battle
Generally, a battle is a conceptual component in the hierarchy of combat in warfare between two or more armed forces, or combatants. In a battle, each combatant will seek to defeat the others, with defeat determined by the conditions of a military campaign...
in which soldier
Soldier
A soldier is a member of the land component of national armed forces; whereas a soldier hired for service in a foreign army would be termed a mercenary...
s advance towards their enemy at their best speed in an attempt to engage in close combat
Close combat
*Close combat is a generic term for both Close Quarters Battle and Hand to hand combat.*Mêlée generally refers to disorganized close combat.*CQB is an acronym for Close Quarters Battle, such as that which occurs in urban warfare....
. The charge is the dominant shock attack and has been the key tactic and decisive moment of most battles in history. Modern charges usually involve small groups against individual positions (such as a bunker) instead of large groups of combatants charging another group or a fortified line.

It may be assumed that the charge was practised in prehistoric warfare, but clear evidence only comes with later literate societies. The tactics of the classical Greek phalanx
Phalanx formation
The phalanx is a rectangular mass military formation, usually composed entirely of heavy infantry armed with spears, pikes, sarissas, or similar weapons...
included an ordered approach march, with a final charge to contact

In response to the introduction of firearms, Irish and Scottish troops at the end of the 16th century developed a tactic that combined a volley of musketry with a rapid close to close combat using swords. Initially successful, it was countered by effective discipline and the development of defensive bayonet tactics.

The development of the bayonet in the late 17th century led to the bayonet charge becoming the main infantry charge tactic through the 19th century and into the 20th. As early as the 19th century, tactical scholars were already noting that most bayonet charges did not result in close combat. Instead, one side usually fled before actual bayonet fighting ensued. The act of fixing bayonets has been held to be primarily connected to morale, the making of a clear signal to friend and foe of a willingness to kill at close quarters.

The shock value of a charge attack has been especially exploited in cavalry tactics
Cavalry tactics
For much of history , humans have used some form of cavalry for war. Cavalry tactics have evolved over time...
, both of armored knights and lighter mounted troops of both earlier and later eras. Historians such as John Keegan have shown that when correctly prepared against (such as by improvising fortifications) and, especially, by standing firm in face of the onslaught, cavalry charges often failed against infantry, with horses refusing to gallop into the dense mass of enemies, or the charging unit itself breaking up. However, when cavalry charges succeeded, it was usually due to the defending formation breaking up (often in fear) and scattering, to be hunted down by the enemy.

The cavalry charge was a significant tactic in the Middle Ages. Although cavalry had charged before, a combination of the adoption of a frame saddle secured in place by a breastband, stirrups and the technique of couching the lance under the arm delivered a hitherto unachievable ability to utilise the momentum of the horse and rider. These developments began in the 7th. century but were not combined to full effect until the 11th. century. The Battle of Dyrrachium in 1081 was an early instance of the familiar medieval cavalry charge; recorded to have a devastating affect by both Norman and Byzantine chroniclers. By the time of the First Crusade
First Crusade
The First Crusade was a military expedition by Western Christianity to regain the Holy Lands taken in the Muslim conquest of the Levant, ultimately resulting in the recapture of Jerusalem...
in the 1090s, the cavalry charge was being employed widely by European armies.

In the twentieth century, the cavalry charge was seldom used, though it enjoyed sporadic and occasional success. By the end of the century the cavalry charge was redundant and no longer employed in military tactics. Several attempted charges were made in World War II
World War II
World War II, or the Second World War , was a global conflict lasting from 1939 to 1945, involving most of the world's nations—including all of the great powers—eventually forming two opposing military alliances: the Allies and the Axis...
, such as the charge at Krojanty of the Polish Uhlans against German mechanised infantry, successfully scattering the dismounted Germans, before being annihilated by armoured vehicles, or the charge of the Savoia Cavalry
1 Cavalry Division Eugenio di Savoia
The 1 Cavalry Division Eugenio di Savoia was an Cavalry Division of the Italian Army during World War II. The Eugenio di Savoia was mobilized in 1940, as a cavalry division and took part in the Invasion of Yugoslavia. The Division remained in Yugoslavia in the Italian XI Corps as an occupying...
at Izbushensky near the Don, 24th August 1942. Although these were successful charges, they were defensive in nature. British and American cavalry units also made similar cavalry charges during World War II.

In what was called the "last true cavalry charge", elements of the United States
United States
The United States of America is a federal constitutional republic comprising fifty states and a federal district...
7th Cavalry Regiment attacked Villista forces in the Battle of Guerrero
Battle of Guerrero
The Battle of Guerrero, or the Battle of San Geronimo, in March 1916, was the first military engagement between the rebels of Pancho Villa and the United States during the Mexican Expedition. After a long ride, elements of the American 7th Cavalry Regiment encountered a large force of Villistas at...
on March 29, 1916. The battle was a victory for the Americans, occurring in desert terrain, at the Mexican
Mexico
The United Mexican States , commonly known as Mexico , is a federal constitutional republic in North America. It is bordered on the north by the United States; on the south and west by the Pacific Ocean; on the southeast by Guatemala, Belize, and the Caribbean Sea; and on the east by the Gulf of...
town of Guerrero
Vicente Guerrero, Chihuahua
Vicente Guerrero is a city and seat of the municipality of Guerrero, in the northern Mexican state of Chihuahua. As of 2005, the town had a total population of 6,536....
, in the state of Chihuahua.

The last successful offensive cavalry charge in history was not conducted by cavalry at all, but rather by mounted infantry
Mounted infantry
Mounted infantry were soldiers who rode horses instead of marching, but actually fought on foot . The original dragoons were essentially mounted infantry...
, when on 31 October 1917, the Australian 4th Light Horse Brigade
4th Light Horse Brigade
The 4th Light Horse Brigade was a mounted infantry brigade of the First Australian Imperial Force serving in the Middle Eastern theatre of World War I. The brigade was formed in March 1915 and shipped to Egypt without their horses and was broken up in Egypt in August 1915...
charged across two miles of open terrain in the face of Ottoman
artillery
Artillery
Originally applied to any group of infantry primarily armed with projectile weapons, artillery has over time become limited in meaning to refer only to those engines of war that operate by projection of munitions far beyond the range of effect of personal weapons...
and machine gun
Machine gun
A machine gun is a fully automatic mounted or portable firearm, usually designed to fire rounds in quick succession from an ammunition belt or large-capacity magazine, typically at a rate of several hundred rounds per minute....
fire to successfully capture Beersheba
Beersheba
Beersheba is the largest city in the Negev desert of southern Israel. Often referred to as the "Capital of the Negev", it is the seventh-largest city in Israel with a population of 194,300....
in what would come to be known as the Battle of Beersheba.

In the firearms age, the basic parameters are speed of advance against rate (or effectiveness) of fire. If the attackers advance at a more rapid rate than the defenders can kill or disable them then the attackers will reach the defenders (though not necessarily without being greatly weakened in numbers). There are many modifiers to this simple comparison – timing, covering fire, organization, formation and terrain, among others. A failed charge may leave the would-be attackers vulnerable to a counter-charge.

There has been a constant rise in an army's rate of fire for the last 700 years or so, but while massed charges have been successfully broken they have also been victorious. It is only since the late 19th century that straight charges have become less successful, especially since the introduction of the machine gun
Machine gun
A machine gun is a fully automatic mounted or portable firearm, usually designed to fire rounds in quick succession from an ammunition belt or large-capacity magazine, typically at a rate of several hundred rounds per minute....
and breech-loading artillery
Artillery
Originally applied to any group of infantry primarily armed with projectile weapons, artillery has over time become limited in meaning to refer only to those engines of war that operate by projection of munitions far beyond the range of effect of personal weapons...
. They are often still useful on a far smaller scale in confined areas where the enemy's firepower cannot be brought to bear. 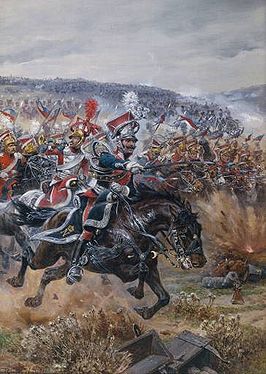