The Japanese invaded Indonesia
Japanese Occupation of Indonesia
The Japanese Empire occupied Indonesia, known then as the Dutch East Indies, during World War II from March 1942 until after the end of War in 1945...
in 1942. By 1943 the tide had turned against them, and in order to encourage support for the war effort, the Japanese appointed Indonesian advisors (sanyo) to the administration and appointed nationalist leader Sukarno
Sukarno
Sukarno, born Kusno Sosrodihardjo was the first President of Indonesia.Sukarno was the leader of his country's struggle for independence from the Netherlands and was Indonesia's first President from 1945 to 1967...
leader of a new Central Advisory Board (Chuo Sani-kai) in Jakarta
Jakarta
Jakarta is the capital and largest city of Indonesia. Officially known as the Special Capital Territory of Jakarta, it is located on the northwest coast of Java, has an area of , and a population of 9,580,000. Jakarta is the country's economic, cultural and political centre...
. In March 1945, the Japanese established the Preparatory Committee for Indonesian Independence or BPUPKI, chaired by Radjiman Wediodiningrat, with Sukarno, Hatta
Mohammad Hatta
was born in Bukittinggi, West Sumatra, Dutch East Indies . He was Indonesia's first vice president, later also serving as the country's Prime Minister. Known as "The Proclamator", he and a number of Indonesians, including the first president of Indonesia, Sukarno, fought for the independence of...
and Thamrin among its members. This body drew up a constitution
Constitution of Indonesia
The Constitution of Indonesia is the basis for the government of the Indonesia.The constitution was written in June, July and August 1945, when Indonesia was emerging from Japanese control at the end of World War II...
for an independent Indonesia over several weeks of meetings. At a session of the Committee on 1 June 1945, Sukarno laid down the principles of Pancasila, which would become the Indonesian national ideology.

On 7 August, the day after the atomic bombing of Hiroshima
Atomic bombings of Hiroshima and Nagasaki
During the final stages of World War II in 1945, the United States conducted two atomic bombings against the cities of Hiroshima and Nagasaki in Japan, the first on August 6, 1945, and the second on August 9, 1945. These two events are the only use of nuclear weapons in war to date.For six months...
, the Preparatory Committee for Indonesian Independence (PPKI) was established. Sukarno was chairman, and Hatta vice-chairman.

On 17 August, Sukarno proclaimed the Independence of Indonesia
Indonesian Declaration of Independence
The Proclamation of Indonesian Independence was read at 10.00 a.m. on Friday, August 17, 1945. The declaration marked the start of the diplomatic and armed-resistance of the Indonesian National Revolution, fighting against the forces of the Netherlands until the latter officially acknowledged...
. On 18 August, the PPKI accepted the constitution drawn up by the BPUPKI as the provisional Constitution of Indonesia
Constitution of Indonesia
The Constitution of Indonesia is the basis for the government of the Indonesia.The constitution was written in June, July and August 1945, when Indonesia was emerging from Japanese control at the end of World War II...
and decided that during a six-month transition period, the new republic would be governed according to the constitution by a president, assisted by a National Committee, who would establish the two chamber legislature mandated by the constitution. The upper chamber, the People's Consultative Assembly
People's Consultative Assembly
The People's Consultative Assembly is the legislative branch in Indonesia's political system. It is composed of the members of the People's Representative Council and the Regional Representative Council. Before 2004, and the amendments to the 1945 Constitution, the MPR was the highest governing...
would then have six months to draw up a new constitution, leaving open the possibility that this would be an entirely new document free of the influence of the situation prevailing during the Second World War. The PPKI also named Sukarno as president and Hatta vice-president The following day it appointed 12 government ministers and decreed that Indonesia was to be divided into eight provinces.
On 29 August, Sukarno dissolved the Preparatory Committee for Indonesian Independence and established the Central Indonesian National Committee (KNIP). Sukarno and Hatta appointed 135 members, including the membership of the PPKI to this new body. It included people representing areas outside Java, Islam
Islam
Islam . The most common are and .   : Arabic pronunciation varies regionally. The first vowel ranges from ~~. The second vowel ranges from ~~~...
, women and young people.


The KNIP as legislature 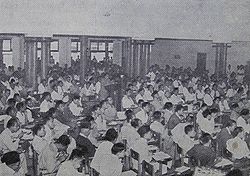 Following a takeover by Sutan Sjahrir
Sutan Sjahrir
Sutan Sjahrir , an avant garde and idealistic Indonesian intellectual, was a revolutionary independence leader...
and Amir Sjarifuddin
Amir Sjarifuddin
Amir Sjarifuddin Harahap, also spelled Amir Sjarifoeddin Harahap was a socialist politician and one of the Indonesian Republic's first leaders, becoming Prime Minister during the country's National Revolution. A Christian convert from a Muslim Batak family, Amir was a major leader of the Left...
on 16 October 1945, the KNIP gained legislative powers, and the system of government moved from a presidential system to a parliamentary system. On 18 October, Vice-president Hatta issued Vice-President's Edict X transferring the powers the Constitution conferred on the People's Consultative Assembly and People's Representative Council
People's Representative Council
The People's Representative Council , sometimes referred to as the House of Representatives, is one of two elected national legislative assemblies in Indonesia....
from the president to the KNIP, making the government towards more parliamentary. The day-to-day tasks of the KNIP would be carried out by a Working Committee. On 30 October, a decree allowed the establishment of political parties. Then on 11 November, Sukarno accepted the fact that ministers would now be responsible to parliament, rather than to him. Three days later, Sutan Syahrir became Indonesia's first prime minister.

In July 1945, the KNIP was reorganized by government decree. It now had 200 members. Of these, 110 were elected, 60 represented organizations and 30 were nominated by the president. Meanwhile, hopes that national elections would be held in January 1946 as planned began to fade.

At the end of 1946, there was "manipulation" of the KNIP membership when it appeared likely the body would reject the Linggadjati Agreement
Linggadjati Agreement
The Linggadjati Agreement, also known as the Cheribon Agreement, was a political accord concluded on 15 November 1946 by the Dutch administration and the unilaterally declared Republic of Indonesia. Negotiations took place 11–12 November...
between the Dutch and the Indonesian republicans. In order to secure avoid this rejection, Sukarno more than doubled the size of the KNIP to 514 members. The decision to expand the KNIP was taken in late 1946, but became effective only in March 1947. The number of left-wing members increased sharply as they wanted the Dutch military action to be ended as quickly as possible. These changes severely damaged that the KNIP's image as representing public opinion.

Because of the ongoing armed struggle against the Dutch
Indonesian National Revolution
The Indonesian National Revolution or Indonesian War of Independence was an armed conflict and diplomatic struggle between Indonesia and the Dutch Empire, and an internal social revolution...
, it was not possible for the entire KNIP to meet regularly. Therefore, the KNIP acted like the upper house, the People's Consultative Assembly in the constitution, meeting only infrequently to discuss fundamental and pressing national issues. The Working Committee continued to act as the day-to-day parliament.

After the 1946/1947 expansion, the membership of KNIP was divided as follows; Indonesian National Party
Indonesian National Party
The Indonesian National Party is the same used by several political parties in Indonesia from 1927 until the present day.-Pre-independence:...
45, Masjumi 60, Socialist Party
Socialist Party (Indonesia)
The Socialist Party was a political party in Indonesia. It was founded in December 1945 at a meeting in Cheribon, as the Socialist People's Party of Prime Minister Sutan Sjahrir and the Socialist Party of Indonesia of Defence Minister Sjarifuddin merged...
35, Communist Party of Indonesia
Communist Party of Indonesia
The Communist Party of Indonesia was the largest non-ruling communist party in the world prior to being crushed in 1965 and banned the following year.-Forerunners:...
35, Labour Party of Indonesia
Labour Party of Indonesia
-Indonesian Labour Front:The party was founded as a national trade union center, the Indonesian Labour Front , on September 15, 1945...
35, Parkindo
Parkindo
Parkindo was a political party in Indonesia from 1950 to 1973.Founded by Johannes Leimena and Melanchton Siregar, the former Military Governor of North Sumatra, who has known as a local teacher in Tarutung. Its support was concentrated in Protestant areas of Indonesia...
8, Catholic Party
Catholic Party
The term may refer to*Catholic Party *Catholic Party *Catholic political parties more generally, for which see :Category:Catholic political parties....
4, Workers 40, Peasants 40, Sumatra
Sumatra
Sumatra is an island in western Indonesia, westernmost of the Sunda Islands. It is the largest island entirely in Indonesia , and the sixth largest island in the world at 473,481 km2 with a population of 50,365,538...
50, Borneo
Borneo
Borneo is the third largest island in the world and is located north of Java Island, Indonesia, at the geographic centre of Maritime Southeast Asia....
8, Sulawesi
Sulawesi
Sulawesi is one of the four larger Sunda Islands of Indonesia and is situated between Borneo and the Maluku Islands. In Indonesia, only Sumatra, Borneo, and Papua are larger in territory, and only Java and Sumatra have larger Indonesian populations.- Etymology :The Portuguese were the first to...
10, Maluku
Maluku Islands
The Maluku Islands are an archipelago that is part of Indonesia, and part of the larger Maritime Southeast Asia region. Tectonically they are located on the Halmahera Plate within the Molucca Sea Collision Zone...
5, Lesser Sunda Islands
Lesser Sunda Islands
The Lesser Sunda Islands or Nusa Tenggara are a group of islands in the southern Maritime Southeast Asia, north of Australia. Together with the Greater Sunda Islands to the west they make up the Sunda Islands...
5, Chinese
Chinese people
The term Chinese people may refer to any of the following:*People with Han Chinese ethnicity ....
7, Arabs 3 and Europeans 3.