Encyclopedia
Causeway Bay is a heavily built-up area of Hong Kong
Hong Kong
Hong Kong is one of two Special Administrative Regions of the People's Republic of China , the other being Macau. A city-state situated on China's south coast and enclosed by the Pearl River Delta and South China Sea, it is renowned for its expansive skyline and deep natural harbour...
, People's Republic of China
People's Republic of China
China , officially the People's Republic of China , is the most populous country in the world, with over 1.3 billion citizens. Located in East Asia, the country covers approximately 9.6 million square kilometres...
, located on the Hong Kong Island
Hong Kong Island
Hong Kong Island is an island in the southern part of the Hong Kong Special Administrative Region. It has a population of 1,289,500 and its population density is 16,390/km², as of 2008...
, and covering parts of Wan Chai
Wan Chai District
The Wan Chai District is one of the 18 districts of Hong Kong, located in the north of Hong Kong island. It had a population of 167,146 in 2001. The district has the second most educated residents with the highest income, the second lowest population and the third oldest residents, and is also the...
and Eastern
Eastern District, Hong Kong
The Eastern District is one of the 18 districts of Hong Kong. It had a population of 587,690 in 2006. The district has the second highest population while its residents have the third highest median household income among 18 districts....
district
Districts of Hong Kong
The Districts of Hong Kong are the 18 political areas by which Hong Kong is geographically divided. Each district has a district council, which was formerly known as a district board. The districts were established in the early 1980s, when Hong Kong was under British rule...
s. The Chinese name is also romanized as Tung Lo Wan as in Tung Lo Wan Road
Tung Lo Wan Road
Tung Lo Wan Road is a road in Causeway Bay and Tai Hang on the north side of Hong Kong Island in Hong Kong. The road joins east with King's Road, Tin Hau Temple Road, Causeway Road and west with Yee Wo Street, Irving Street, Leighton Road and Causeway Road.The road draws the early shore line in...
(銅鑼灣道). The rent in the shopping areas of Causeway Bay is ranked as being one of the highest in the world, near that of London
London
London is the capital city of :England and the :United Kingdom, the largest metropolitan area in the United Kingdom, and the largest urban zone in the European Union by most measures. Located on the River Thames, London has been a major settlement for two millennia, its history going back to its...
's Sloane Street
Sloane Street
Sloane Street is a major London street which runs north to south, from Knightsbridge to Sloane Square, crossing Pont Street about half way along, entirely in The Royal Borough of Kensington and Chelsea. Sloane Street takes its name from Sir Hans Sloane, who purchased the surrounding area in 1712...
and New York
New York
New York is a state in the Northeastern region of the United States. It is the nation's third most populous state. New York is bordered by New Jersey and Pennsylvania to the south, and by Connecticut, Massachusetts and Vermont to the east...
's Fifth Avenue. 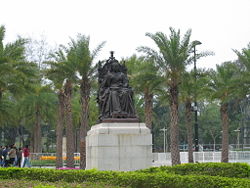 The typhoon shelter
Typhoon shelter
A typhoon shelter is a shelter for fishing boats during typhoons. These facilities are often found in Hong Kong.-Structure:In its usual form, a typhoon shelter is usually in the form of a bay or a cove, with a narrow opening for access, as most of the opening to the seas are blocked by a man-made...
of Causeway Bay and the Tin Hau Temple reveal that the area was once a fishing village. Before urban development and massive land reclamation
Land reclamation in Hong Kong
Land is in short supply in Hong Kong, and land reclamation has been conducted there since the mid-19th century.-Projects:One of the earliest and famous project was the Praya Reclamation Scheme, which added 50 to of land in 1890 during the second phase of construction...
, Causeway Bay was a heavily silted bay. Its former shape can be found on maps by tracing Tung Lo Wan Road, which goes along the former bay. In the early stage of development a causeway
Causeway
In modern usage, a causeway is a road or railway elevated, usually across a broad body of water or wetland.- Etymology :When first used, the word appeared in a form such as “causey way” making clear its derivation from the earlier form “causey”. This word seems to have come from the same source by...
was built, which is the present-day Causeway Road. In the 1950s, the coastline was further pushed forward when the remains of the bay was reclaimed for the Victoria Park
Victoria Park, Hong Kong
Victoria Park is a public park in Hong Kong, named after Queen Victoria of the United Kingdom. It is located in Causeway Bay, on the north of Hong Kong Island, between Causeway Bay and Tin Hau MTR stations...
, when the statue of Queen Victoria was brought back from Japan
Japan
Japan is an island nation in East Asia. Located in the Pacific Ocean, it lies to the east of the Sea of Japan, China, North Korea, South Korea and Russia, stretching from the Sea of Okhotsk in the north to the East China Sea and Taiwan in the south...
. The statue had been taken away during the Second World War
World War II
World War II, or the Second World War , was a global conflict lasting from 1939 to 1945, involving most of the world's nations—including all of the great powers—eventually forming two opposing military alliances: the Allies and the Axis...
from Statue Square
Statue Square
Statue Square is a public pedestrian square in Central, Hong Kong.-History:The square was built at the end of the 19th century. The idea of a square of statues dedicated to royalty was conceived by Sir Catchick Paul Chater. It derives its name from the fact that it originally contained the statue...
at Chater Road, Central
Central, Hong Kong
Central is the central business district of Hong Kong. It is located in Central and Western District, on the north shore of Hong Kong Island, across Victoria Harbour from Tsim Sha Tsui, the southernmost point of Kowloon Peninsula...
. Kellett Island
Kellett Island
Kellett Island is a former island off East Point in Hong Kong. It is now connected to Hong Kong Island at Causeway Bay following land reclamation in 1969....
off the coast of Causeway Bay has disappeared and connected as a result of the land reclamation.

The names of Yee Wo Street, Jardine's Bazaar and Jardine's Crescent reveal that the land in this area was sold by the British colonial government to Jardines
Jardine Matheson Holdings
Jardine Matheson Holdings Limited often referred to as Jardines, is a multinational corporation incorporated in Bermuda and based in Hong Kong. While listed on the London Stock Exchange and the Singapore Exchange, the vast majority of Jardines shares are traded in Singapore...
in the early 19th century. The area was therefore named East Point, after a pointed place on the coastline, east from the centre of Victoria City.

East Point is now regarded as part of Causeway Bay as result of assimilation of the geographical name. An East Point Road can still be found, which reveals the pointed coastline in the early days, prior to reclamation.

Causeway Bay or East Point is one of Hong Kong's major shopping districts. It includes the 13-storey Japanese department store Sogo
Sogo
Sogo Co., Ltd. is a department store chain that operates an extensive network of branches in Japan. It once owned stores in locations as diverse as Beijing in China, Causeway Bay in Hong Kong, Taipei in Taiwan, Jakarta, Medan, Bandung & Surabaya in Indonesia, Kuala Lumpur in Malaysia, Singapore,...
and Times Square
Times Square (Hong Kong)
Times Square is a major shopping centre and office tower complex in Causeway Bay, Hong Kong Island, Hong Kong.The complex, owned by Wharf Properties Limited, part of The Wharf Limited group, was opened in April 1994.-History:...
, an indoor shopping complex. There are also smaller malls such as World Trade Centre
World Trade Centre (Hong Kong)
The World Trade Centre was the name of one of the portfolio of buildings developed in Hong Kong by Jardines through its property development arm, Hongkong Land, and is also connected via passageway to its neighbour, The Excelsior It has since been sold to Sun Hung Kai Properties...
, Windsor House, Hang Lung Centre, Fashion Island, Fashion Walk, Lee Gardens and Lee Gardens Two. Causeway Bay is one of the most crowded areas in Hong Kong since it contains many trendy shops carrying both locally made fashion and products from Japan, Europe and the United States. As such, it is a popular social spot for young people.

Many shops are open until well after midnight.

For years, Jardine Matheson has fired a cannon shot at noon every day in Causeway Bay, by Victoria Harbour
Victoria Harbour
Victoria Harbour is a natural landform harbour situated between Hong Kong Island and the Kowloon Peninsula in Hong Kong. The harbour's deep, sheltered waters and strategic location on the South China Sea were instrumental in Hong Kong's establishment as a British colony and its subsequent...
, slightly eastward of the former Kellett Island. The gunshots have served as time signals for many generations of old inhabitants of Hong Kong. This tradition still continues today. This is the "Noonday Gun" mentioned in the Noel Coward
Noël Coward
Sir Noël Peirce Coward was an English playwright, composer, director, actor and singer, known for his wit, flamboyance, and what Time magazine called "a sense of personal style, a combination of cheek and chic, pose and poise".Born in Teddington, a suburb of London, Coward attended a dance academy...
song "Mad Dogs and Englishmen
Mad Dogs and Englishmen (song)
"Mad Dogs and Englishmen" is a song written by Noël Coward and first performed in The Third Little Show at the Music Box Theatre, New York, on 1 June 1931, by Beatrice Lillie. The following year it was used in the revue Words and Music and also released in a "studio version"...
".

Note that although the names of certain landmarks in the western part of Causeway Bay start with "Wan Chai" (e.g. Wan Chai Fire Station), the landmarks are across the local customary limit of Wan Chai on Canal Road. 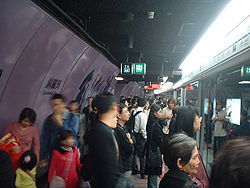