Encyclopedia
Katherine Carey, often spelt Catherine Carey, after her marriage Katherine Knollys and later Lady Knollys, pronounced "Noles" (c. 1524 – 15 January 1569), was chief Lady of the Bedchamber
Lady of the Bedchamber
This is an incomplete list of those who have served as Lady of the Bedchamber in the British Royal Household...
to Queen Elizabeth I
Elizabeth I of England
Elizabeth I was queen regnant of England and Ireland from 17 November 1558 until her death. Sometimes called The Virgin Queen, Gloriana, or Good Queen Bess, Elizabeth was the fifth and last monarch of the Tudor dynasty...
, who was her first cousin.

Katherine's mother was Mary Boleyn
Mary Boleyn
Mary Boleyn , was the sister of English queen consort Anne Boleyn and a member of the Boleyn family, which enjoyed considerable influence during the reign of King Henry VIII of England...
, a mistress of Henry VIII
Henry VIII of England
Henry VIII was King of England from 21 April 1509 until his death. He was Lord, and later King, of Ireland, as well as continuing the nominal claim by the English monarchs to the Kingdom of France...
before he courted and later married her sister Anne Boleyn
Anne Boleyn
Anne Boleyn ;c.1501/1507 – 19 May 1536) was Queen of England from 1533 to 1536 as the second wife of Henry VIII of England and Marquess of Pembroke in her own right. Henry's marriage to Anne, and her subsequent execution, made her a key figure in the political and religious upheaval that was the...
, Henry's second Queen consort
Queen consort
A queen consort is the wife of a reigning king. A queen consort usually shares her husband's rank and holds the feminine equivalent of the king's monarchical titles. Historically, queens consort do not share the king regnant's political and military powers. Most queens in history were queens consort...
.

Katherine's husband was Sir Francis Knollys, with whom she had 14 children.

Katherine Carey was born in about 1524, the daughter of Sir William Carey of Aldenham
Aldenham
This article is about the village in Hertfordshire. For the London Transport Bus Overhaul Works, see Aldenham Works.Aldenham is a village and civil parish in Hertfordshire, approx. three miles north-east of Watford and two miles from Radlett. It was mentioned in the Domesday Book and is one of...
in Hertfordshire
Hertfordshire
Hertfordshire is a ceremonial and non-metropolitan county in the East region of England. The county town is Hertford.The county is one of the Home Counties and lies inland, bordered by Greater London , Buckinghamshire , Bedfordshire , Cambridgeshire and...
, Gentleman of the Privy Chamber
Privy chamber
A Privy chamber was the private apartment of a royal residence in England. The gentlemen of the Privy chamber were servants to the Crown who would wait and attend on the King and Queen at court during their various activities, functions and entertainments....
and Esquire of the Body to Henry VIII, and his wife Mary Boleyn
Mary Boleyn
Mary Boleyn , was the sister of English queen consort Anne Boleyn and a member of the Boleyn family, which enjoyed considerable influence during the reign of King Henry VIII of England...
, who had once been a mistress of the king. She was Elizabeth I's first cousin. Some contemporaries also asserted that Katherine was an illegitimate child of the King and so was Elizabeth's half sister. This was never acknowledged by the King 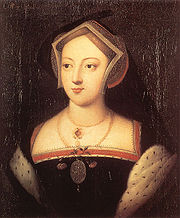 Katherine was said to be a witness to the execution of her aunt, Anne Boleyn, in 1536. But according to the biographer of Mary Boleyn, Alison Weir, it was a Victorian legend that claimed that a young Catherine stayed overnight to entertain and distract her aunt Anne in the Tower the morning before the execution.

Katherine went on to become Maid of Honour to both Queens Anne of Cleves
Anne of Cleves
Anne of Cleves was a German noblewoman and the fourth wife of Henry VIII of England and as such she was Queen of England from 6 January 1540 to 9 July 1540. The marriage was never consummated, and she was not crowned queen consort...
and Catherine Howard
Catherine Howard
Catherine Howard , also spelled Katherine, Katheryn or Kathryn, was the fifth wife of Henry VIII of England, and sometimes known by his reference to her as his "rose without a thorn"....
. On 26 April 1540 she married Sir Francis Knollys
Francis Knollys (the elder)
Sir Francis Knollys , of Greys Court, in Oxfordshire, KG was an English courtier in the service and favour of Henry VIII, Edward VI and Elizabeth I of England, and was a Member of Parliament for a number of constituencies....
. Her husband was named a Knight of the Garter in 1593, although he had already been knighted in 1547. He was also Treasurer of the Royal Household
Treasurer of the Household
The position of Treasurer of the Household is theoretically held by a household official of the British monarch, under control of the Lord Steward's Department, but is, in fact, a political office held by one of the government's Deputy Chief Whips in the House of Commons...
. From the time of her marriage, Katherine became known as Mistress Knollys, and from 1547 as Lady Knollys. When not in London, the couple lived at Reading
Reading, Berkshire
Reading is a large town and unitary authority area in England. It is located in the Thames Valley at the confluence of the River Thames and River Kennet, and on both the Great Western Main Line railway and the M4 motorway, some west of London....
in Berkshire
Berkshire
Berkshire is a historic county in the South of England. It is also often referred to as the Royal County of Berkshire because of the presence of the royal residence of Windsor Castle in the county; this usage, which dates to the 19th century at least, was recognised by the Queen in 1957, and...
and Rotherfield Greys
Rotherfield Greys
Rotherfield Greys is a village and civil parish in the Chiltern Hills in South Oxfordshire. It is west of Henley-on-Thames and just over east of the village of Rotherfield Peppard....
in Oxfordshire
Oxfordshire
Oxfordshire is a county in the South East region of England, bordering on Warwickshire and Northamptonshire , Buckinghamshire , Berkshire , Wiltshire and Gloucestershire ....
, although, as staunch Protestants, they fled to Germany during the reign of Queen Mary I
Mary I of England
Mary I was queen regnant of England and Ireland from July 1553 until her death.She was the only surviving child born of the ill-fated marriage of Henry VIII and his first wife Catherine of Aragon. Her younger half-brother, Edward VI, succeeded Henry in 1547...
.

Princess Elizabeth wrote to her cousin there and Katherine was appointed Chief Lady of the Bedchamber after she became Queen Elizabeth I. For the first ten years of the reign, Lady Katherine combined the most senior post among the ladies-in-waiting with motherhood to more than a dozen children. Unsurprisingly, Elizabeth never recognized Katherine as her half-sister, and it was certainly not a relationship that Katherine or Sir Francis ever openly claimed. At court, Katherine was acknowledged as the queen's favourite among her first cousins, and Elizabeth's lack of other female relatives to whom she felt close may be adequate to explain this favoured position.

She died on 15 January 1569 at Hampton Court Palace
Hampton Court Palace
Hampton Court Palace is a royal palace in the London Borough of Richmond upon Thames, Greater London; it has not been inhabited by the British royal family since the 18th century. The palace is located south west of Charing Cross and upstream of Central London on the River Thames...
, being outlived by her husband and children, and was buried the following April in St Edmund's Chapel in Westminster Abbey
Westminster Abbey
The Collegiate Church of St Peter at Westminster, popularly known as Westminster Abbey, is a large, mainly Gothic church, in the City of Westminster, London, United Kingdom, located just to the west of the Palace of Westminster. It is the traditional place of coronation and burial site for English,...
. There is a small commemorative plaque
Commemorative plaque
A commemorative plaque, or simply plaque, is a plate of metal, ceramic, stone, wood, or other material, typically attached to a wall, stone, or other vertical surface, and bearing text in memory of an important figure or event...
in the abbey, although her chief monument is at Rotherfield Greys
Rotherfield Greys
Rotherfield Greys is a village and civil parish in the Chiltern Hills in South Oxfordshire. It is west of Henley-on-Thames and just over east of the village of Rotherfield Peppard....
in Oxfordshire
Oxfordshire
Oxfordshire is a county in the South East region of England, bordering on Warwickshire and Northamptonshire , Buckinghamshire , Berkshire , Wiltshire and Gloucestershire ....
.

Sir Francis and Lady Knollys produced a surprising number of offspring who survived to maturity. Of the children listed, only the last, Dudley, is known to have died in infancy:


She should not be confused with her niece, Katherine Carey, who became Countess of Nottingham.