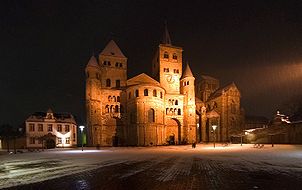 The Cathedral of Saint Peter is a church in Trier
Trier
Trier, historically called in English Treves is a city in Germany on the banks of the Moselle. It is the oldest city in Germany, founded in or before 16 BC....
, Rhineland-Palatinate
Rhineland-Palatinate
Rhineland-Palatinate is one of the 16 states of the Federal Republic of Germany. It has an area of and about four million inhabitants. The capital is Mainz. English speakers also commonly refer to the state by its German name, Rheinland-Pfalz ....
, Germany
Germany
Germany , officially the Federal Republic of Germany , is a federal parliamentary republic in Europe. The country consists of 16 states while the capital and largest city is Berlin. Germany covers an area of 357,021 km2 and has a largely temperate seasonal climate...
. It is the oldest cathedral
Cathedral
A cathedral is a Christian church that contains the seat of a bishop...
in the country. The edifice is notable for its extremely long life span under multiple different eras each contributing some elements to its design, including the center of the main chapel
Chapel
A chapel is a building used by Christians as a place of fellowship and worship. It may be part of a larger structure or complex, such as a church, college, hospital, palace, prison or funeral home, located on board a military or commercial ship, or it may be an entirely free-standing building,...
being made of Roman brick laid under the direction of Saint Helen
Helena of Constantinople
Saint Helena also known as Saint Helen, Helena Augusta or Helena of Constantinople was the consort of Emperor Constantius, and the mother of Emperor Constantine I...
, resulting in a cathedral added on to gradually rather than rebuilt in different eras. Its dimensions, 112.5 by 41 m, make it the largest church structure in Trier. Since 1986 it has been on the UNESCO list of World Heritage Sites.

The structure is raised upon the foundations of Roman buildings of Augusta Treverorum
History of Trier
Trier in Rhineland-Palatinate, whose history dates to the Roman Empire, is often claimed to be the oldest city in Germany. Traditionally it was known in English by its French name of Treves.- Prehistory :...
. Following the conversion of the Emperor Constantine the Bishop
Bishop
A bishop is an ordained or consecrated member of the Christian clergy who is generally entrusted with a position of authority and oversight. Within the Catholic Church, Eastern Orthodox, Oriental Orthodox Churches, in the Assyrian Church of the East, in the Independent Catholic Churches, and in the...
Maximin of Trier
Maximin of Trier
Saint Maximin was the fifth bishop of Trier, according to the list provided by the diocese's website, taking his seat in 341/342...
(329-346) coordinated the construction of the grandest ensemble of ecclesiastical structures in the West outside Rome: on a groundplan four times the area of the present cathedral no less than four basilica
Basilica
The Latin word basilica , was originally used to describe a Roman public building, usually located in the forum of a Roman town. Public basilicas began to appear in Hellenistic cities in the 2nd century BC.The term was also applied to buildings used for religious purposes...
s, a baptistery
Baptistery
In Christian architecture the baptistry or baptistery is the separate centrally-planned structure surrounding the baptismal font. The baptistry may be incorporated within the body of a church or cathedral and be provided with an altar as a chapel...
and outbuildings were constructed; the four piers of the crossing formed the nucleus of the present structure.

The fourth century structure was left in ruins by the Franks
Franks
The Franks were a confederation of Germanic tribes first attested in the third century AD as living north and east of the Lower Rhine River. From the third to fifth centuries some Franks raided Roman territory while other Franks joined the Roman troops in Gaul. Only the Salian Franks formed a...
and rebuilt. Normans
Normans
The Normans were the people who gave their name to Normandy, a region in northern France. They were descended from Norse Viking conquerors of the territory and the native population of Frankish and Gallo-Roman stock...
destroyed the structure again in 882. Under Bishop Egbert the Dom was restored once more.

The West front in five symmetrical sections remains typical of Romanesque architecture
Romanesque architecture
Romanesque architecture is an architectural style of Medieval Europe characterised by semi-circular arches. There is no consensus for the beginning date of the Romanesque architecture, with proposals ranging from the 6th to the 10th century. It developed in the 12th century into the Gothic style,...
under the Salian emperors. The West end choir, with its apsidal
Apse
In architecture, the apse is a semicircular recess covered with a hemispherical vault or semi-dome...
semi-cylinder expressed on the exterior façade, was completed in 1196. The interior is of three Romanesque nave
Nave
In Romanesque and Gothic Christian abbey, cathedral basilica and church architecture, the nave is the central approach to the high altar, the main body of the church. "Nave" was probably suggested by the keel shape of its vaulting...
s with Gothic
Gothic architecture
Gothic architecture is a style of architecture that flourished during the high and late medieval period. It evolved from Romanesque architecture and was succeeded by Renaissance architecture....
vaulting
Vault (architecture)
A Vault is an architectural term for an arched form used to provide a space with a ceiling or roof. The parts of a vault exert lateral thrust that require a counter resistance. When vaults are built underground, the ground gives all the resistance required...
, and a Baroque
Baroque
The Baroque is a period and the style that used exaggerated motion and clear, easily interpreted detail to produce drama, tension, exuberance, and grandeur in sculpture, painting, literature, dance, and music...
chapel for the relic of the Seamless robe of Jesus
Seamless robe of Jesus
The Seamless Robe of Jesus is the robe said to have been worn by Jesus during his crucifixion...
, recovered from the interior of the high altar in 1512, complete the interior.

The Latin
Latin
Latin is an Italic language originally spoken in Latium and Ancient Rome. It, along with most European languages, is a descendant of the ancient Proto-Indo-European language. Although it is considered a dead language, a number of scholars and members of the Christian clergy speak it fluently, and...
inscription above the clock on the tower reads "NESCITIS QVA HORA DOMINVS VENIET" ("You do not know what time the Lord is coming").