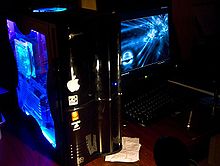 Cases may also be modified to improve a computer's performance; this is usually associated with cooling and involves changes to components as well as the case.

When personal computers first became available to the public, the majority were produced in simple, beige-colored cases. This design is sometimes referred to be as a beige box
Beige box
In consumer computer products, a beige box is a standard personal computer . It has come to be used as a term of derision implying conservative or dated aesthetics and unremarkable specifications....
. Although this met the purpose of containing the components of the personal computer
Personal computer
A personal computer is any general-purpose computer whose size, capabilities, and original sales price make it useful for individuals, and which is intended to be operated directly by an end-user with no intervening computer operator...
, many users considered their computers as "tacky" or "dull", and some began modifying their existing chassis, or building their own from scratch.

A new market for third-party computer cases and accessories began to develop, and today cases are available in a wide variety of colors and styles. Today the business of "modding" computers and their cases is a hugely profitable endeavor, and modding competitions are everywhere. 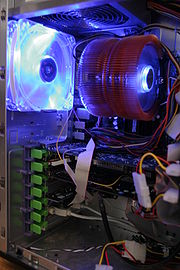 Lighting modifications are often paired with window mods to help show off the components. Although not as common, they are also placed in cases without a window, allowing light to shine through any holes or gaps of the case which add subtle aesthetics to an otherwise plain looking case; this is also done for practical purposes such as to make a computer double as a night light. Internal components such as case fans, CPU heatsink fans, and power supplies are often available with built in lighting. 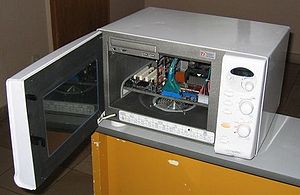 Many websites and companies run contests for case modders, awarding prizes and accolades to the winners. Some of these contests are sponsored by computer enthusiast magazines and others by computer retailers. 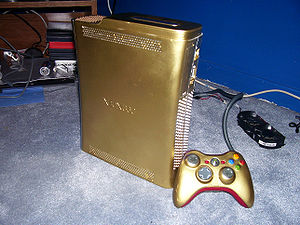 Console case modding refers to gamers who modify the case of their game consoles. The most common consoles to modify are the Xbox and Xbox 360, because there is much more room inside to customize them with items such as lights, fans, etc. Moreover, the Xbox 360 requires additional cooling over the factory configuration to avoid overheating issues
Xbox 360 Technical Problems
The Xbox 360 video game console is subject to a number of technical problems and failures that can render it unusable. Many of the issues can be identified by a series of glowing red lights flashing on the face of the console; the three flashing red lights being the most infamous...
due to the use of EEC-mandated lead-free solder, which is not capable of handling the temperature limits standard solder can. These consoles and their controllers are also relatively easy to take apart. For those who do not wish to scratch-build mods, there are several companies that sell transparent Xbox cases and various cooling/lighting equipment for them.

Console case modding started in the late 1980s when the NES
Nintendo Entertainment System
The Nintendo Entertainment System is an 8-bit video game console that was released by Nintendo in North America during 1985, in Europe during 1986 and Australia in 1987...
and Sega Genesis
Sega Mega Drive
The Sega Genesis is a fourth-generation video game console developed and produced by Sega. It was originally released in Japan in 1988 as , then in North America in 1989 as Sega Genesis, and in Europe, Australia and other PAL regions in 1990 as Mega Drive. The reason for the two names is that...
, were released; many customers simply put pictures or stickers on them until the PlayStation
PlayStation
The is a 32-bit fifth-generation video game console first released by Sony Computer Entertainment in Japan on December 3, .The PlayStation was the first of the PlayStation series of consoles and handheld game devices. The PlayStation 2 was the console's successor in 2000...
was released. Many case modders started to change hardware, for example by altering them to play copied games (known as 'chipping' the games console). The most common modification for the PlayStation was the 'chipping' process (mentioned above). When the Nintendo 64
Nintendo 64
The , often referred to as N64, was Nintendo′s third home video game console for the international market. Named for its 64-bit CPU, it was released in June 1996 in Japan, September 1996 in North America, March 1997 in Europe and Australia, September 1997 in France and December 1997 in Brazil...
, Dreamcast and PlayStation 2
PlayStation 2
The PlayStation 2 is a sixth-generation video game console manufactured by Sony as part of the PlayStation series. Its development was announced in March 1999 and it was first released on March 4, 2000, in Japan...
were released, many chipped them, styled them, and added additional cooling; some went as far as changing the hardware itself. When the Xbox
Xbox
The Xbox is a sixth-generation video game console manufactured by Microsoft. It was released on November 15, 2001 in North America, February 22, 2002 in Japan, and March 14, 2002 in Australia and Europe and is the predecessor to the Xbox 360. It was Microsoft's first foray into the gaming console...
and Xbox 360
Xbox 360
The Xbox 360 is the second video game console produced by Microsoft and the successor to the Xbox. The Xbox 360 competes with Sony's PlayStation 3 and Nintendo's Wii as part of the seventh generation of video game consoles...
were released, many modders personally customized them further, using neon lights, transparent cases, fans, and PC hard drives (as opposed to Xbox-branded drives). Many modders found that altering the interior of Xbox 360s was difficult due to absence of a power cable (normally in a PC, this cord attaches the hard disk drive to its motherboard). Despite shortcomings, modders also found a way to power neon lighting and other powered equipment by using the DVD-ROM power supply; however, due to insufficient power to the hard disk drive, it often caused freezing during disk access. Another common method for internal case modding uses the power outlet for the internal fan by splitting the cord with a "Y" connector. However, the most up to date modders will use power points under where the PSU (power supply) plugs in, which doesn't diminish any (or very little) power from the console.