Encyclopedia
The common bream, freshwater bream, bream, bronze bream or carp bream, Abramis brama, is a Europe
Europe
Europe is, by convention, one of the world's seven continents. Comprising the westernmost peninsula of Eurasia, Europe is generally 'divided' from Asia to its east by the watershed divides of the Ural and Caucasus Mountains, the Ural River, the Caspian and Black Seas, and the waterways connecting...
an species of freshwater fish
Freshwater fish
Freshwater fish are fish that spend some or all of their lives in freshwater, such as rivers and lakes, with a salinity of less than 0.05%. These environments differ from marine conditions in many ways, the most obvious being the difference in levels of salinity...
in the family Cyprinidae.

The common bream lives in ponds, lakes and canals, and in slow-flowing rivers.

It is now considered to be the only species in its genus.

The common bream's home range is Europe north of the Alps
Alps
The Alps is one of the great mountain range systems of Europe, stretching from Austria and Slovenia in the east through Italy, Switzerland, Liechtenstein and Germany to France in the west....
and Pyrenees
Pyrenees
The Pyrenees is a range of mountains in southwest Europe that forms a natural border between France and Spain...
, as well as the Balkans
Balkans
The Balkans is a geopolitical and cultural region of southeastern Europe...
. It is found as far east as the Caspian Sea
Caspian Sea
The Caspian Sea is the largest enclosed body of water on Earth by area, variously classed as the world's largest lake or a full-fledged sea. The sea has a surface area of and a volume of...
, the Black Sea
Black Sea
The Black Sea is bounded by Europe, Anatolia and the Caucasus and is ultimately connected to the Atlantic Ocean via the Mediterranean and the Aegean seas and various straits. The Bosphorus strait connects it to the Sea of Marmara, and the strait of the Dardanelles connects that sea to the Aegean...
, and the Aral Sea
Aral Sea
The Aral Sea was a lake that lay between Kazakhstan in the north and Karakalpakstan, an autonomous region of Uzbekistan, in the south...
.

It has a laterally flattened and high-backed body and a slightly undershot mouth. It is a silvery grey colour, though older fish can be bronze-coloured especially in clear waters. The fins are greyish to black, but never reddish. 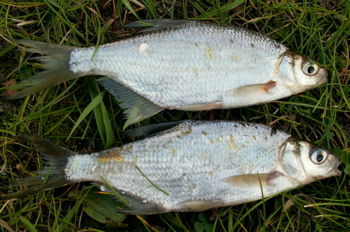 The common bream can easily be confused with the silver or white bream
Silver Bream
The Silver Bream is a species of ray-finned fish in the Cyprinidae family.-Locations:It is found in Albania, Andorra, Armenia, Austria, Azerbaijan, Belarus, Belgium, Bulgaria, Cyprus, Czech Republic, Estonia, Faroe Islands, Finland, France, Georgia, Germany, Gibraltar, Hungary, Iceland, Iran,...
(Blicca bjoerkna), in particular at the younger stages (see picture). The most reliable method of distinguishing these species is by counting the scales in a straight line downwards from the first ray of the dorsal fin
Dorsal fin
A dorsal fin is a fin located on the backs of various unrelated marine and freshwater vertebrates, including most fishes, marine mammals , and the ichthyosaurs...
to the lateral line
Lateral line
The lateral line is a sense organ in aquatic organisms , used to detect movement and vibration in the surrounding water. Lateral lines are usually visible as faint lines running lengthwise down each side, from the vicinity of the gill covers to the base of the tail...
. Silver bream has fewer than ten rows of scales, common bream has eleven or more. At the adult stage the reddish tint of the pectoral fin of the silver bream is diagnostic. Like other Cyprinidae, common bream can easily hybridise with other species, and hybrids with roach (Rutilus rutilus) can be very difficult to distinguish from pure-bred bream.

The common bream generally lives in rivers (especially in the lower reaches) and in nutrient-rich lakes and ponds with muddy bottoms and plenty of algae
Algae
Algae are a large and diverse group of simple, typically autotrophic organisms, ranging from unicellular to multicellular forms, such as the giant kelps that grow to 65 meters in length. They are photosynthetic like plants, and "simple" because their tissues are not organized into the many...
. It can also be found in brackish sea waters.

The common bream lives in schools near the bottom. At night common bream can feed close to the shore
Shore
A shore or shoreline is the fringe of land at the edge of a large body of water, such as an ocean, sea, or lake. In Physical Oceanography a shore is the wider fringe that is geologically modified by the action of the body of water past and present, while the beach is at the edge of the shore,...
and in clear waters with sandy bottoms feeding pits can be seen during daytime. The fish's protractile mouth helps it dig for chironomid larvae, Tubifex
Tubifex
Tubifex is a cosmopolitan genus of tubificid Annelids that inhabit the sediments of lakes, rivers and occasionally sewer lines. There are over ten known species of Tubifex, but the number is not certain, as the species are not easily distinguishable from each other.-Food and feeding:Tubifex worms...
worms, bivalves, and gastropods. The bream eats water plants and plankton
Plankton
Plankton are any drifting organisms that inhabit the pelagic zone of oceans, seas, or bodies of fresh water. That is, plankton are defined by their ecological niche rather than phylogenetic or taxonomic classification...
as well.

In very turbid waters common bream can occur in large numbers, which may result in a shortage of bottom-living prey such as chironomids. The bream is then forced to live by filter feeding with its gill rakers, Daphnia
Daphnia
Daphnia are small, planktonic crustaceans, between 0.2 and 5 mm in length. Daphnia are members of the order Cladocera, and are one of the several small aquatic crustaceans commonly called water fleas because of their saltatory swimming style...
water fleas being the main prey. As the fish grows, the gill raker
Gill raker
Gill rakers in fish are bony or cartilaginous processes that project from the branchial arch and are involved with filter feeding tiny prey. They are not to be confused with the gill filaments that compose the bony part of the gill. Rakers are usually present in two rows, projecting from both the...
s become too far apart to catch small prey and the bream will not then grow bigger than 40 centimetres (15.7 in). If a common bream is malnourished it can develop a so-called knife back: a sharp edge along its back.

The common bream spawn
Spawn (biology)
Spawn refers to the eggs and sperm released or deposited, usually into water, by aquatic animals. As a verb, spawn refers to the process of releasing the eggs and sperm, also called spawning...
s from April to June, when water temperatures are around 17 °C (63 °F). At this time the males form territories
Territory (animal)
In ethology the term territory refers to any sociographical area that an animal of a particular species consistently defends against conspecifics...
within which the females lay 100,000 to 300,000 eggs on water plants. The fry hatch after three to twelve days and attach themselves to water plants with special adhesive glands, until their yolk is used up.

Because of their slender shape the young fish are often not recognised as bream, but they can be identified by their flat bodies and silvery colour. At this stage the fish are still pelagic, but after a few months they acquire their typical body shape and become bottom-dwellers. By three to four years old the fish are sexually mature.

They are fished
Fishing
Fishing is the activity of trying to catch wild fish. Fish are normally caught in the wild. Techniques for catching fish include hand gathering, spearing, netting, angling and trapping....
both commercially and for sport.

However bream do not often fight as hard as some other species native to the UK, and owing to their flat disc shaped profile, once tilted to one side are relatively easy to bring to the bank.
Common baits for bream include;
All three methods can be fished using a paternoster rig, and cage feeder with the bait, for example sweetcorn fixed inside using groundbait plugs, or maggot feeder when fishing maggots.