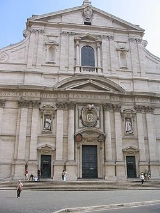 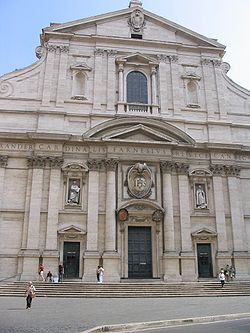 Giacomo della Porta was an Italian
Italy
Italy , officially the Italian Republic languages]] under the European Charter for Regional or Minority Languages. In each of these, Italy's official name is as follows:;;;;;;;;), is a unitary parliamentary republic in South-Central Europe. To the north it borders France, Switzerland, Austria and...
architect and sculptor, who worked on many important buildings in Rome, including St. Peter's Basilica
St. Peter's Basilica
The Papal Basilica of Saint Peter , officially known in Italian as ' and commonly known as Saint Peter's Basilica, is a Late Renaissance church located within the Vatican City. Saint Peter's Basilica has the largest interior of any Christian church in the world...
. He was born at Porlezza
Porlezza
Porlezza is a comune on Lake Lugano in the Province of Como in the Italian region Lombardy, located about 60 km north of Milan and about 25 km north of Como...
, Lombardy
Lombardy
Lombardy is one of the 20 regions of Italy. The capital is Milan. One-sixth of Italy's population lives in Lombardy and about one fifth of Italy's GDP is produced in this region, making it the most populous and richest region in the country and one of the richest in the whole of Europe...
and died in Rome.

Della Porta was influenced by and collaborated with Michelangelo
Michelangelo
Michelangelo di Lodovico Buonarroti Simoni , commonly known as Michelangelo, was an Italian Renaissance painter, sculptor, architect, poet, and engineer who exerted an unparalleled influence on the development of Western art...
, and Giacomo Barozzi da Vignola
Giacomo Barozzi da Vignola
Giacomo Barozzi da Vignola was one of the great Italian architects of 16th century Mannerism. His two great masterpieces are the Villa Farnese at Caprarola and the Jesuits' Church of the Gesù in Rome...
, his teacher of architecture. After 1563 he carried out Michelangelo's plans for the rebuilding of the Campidoglio or Capitoline Hill's open spaces where he completed the façade and steps of Palazzo Senatorio, and the Cordonata
Cordonata
Cordonata is a sloping road composed of transversal stripes , which are made with stone or bricks. It has a form almost similar to a flight of steps, but allows the transit of horses and donkeys...
capitolina or the ramped steps up to the Piazza del Campidoglio.

After the death of Vignola in 1573, he continued the construction of Il Gesù, the mother church of the Jesuit order, and in 1584 modified its façade after his own designs.

Giacomo della Porta completed a number of Rome's fountains from the 16th century; these included the fountains in the Piazza del Popolo
Piazza del Popolo
Piazza del Popolo is a large urban square in Rome. The name in modern Italian literally means "People's Square", but historically it derives from the poplars after which the church of Santa Maria del Popolo, in the northeast corner of the piazza, takes its name.The piazza lies inside the northern...
, the Fountain of Neptune, Rome
Fountain of Neptune, Rome
The Fontana del Nettuno is a fountain in Rome, Italy, located at the north end of the Piazza Navona. It was once called "Fontana dei Calderari" because it was located close to a small alley with blacksmith's workshops, makers of pots and pans and of other metal based businesses, all of them...
and La Fontana del Moro in the Piazza Navona
Piazza Navona
Piazza Navona is a city square in Rome, Italy. It is built on the site of the Stadium of Domitian, built in 1st century AD, and follows the form of the open space of the stadium. The ancient Romans came there to watch the agones , and hence it was known as 'Circus Agonalis'...
.