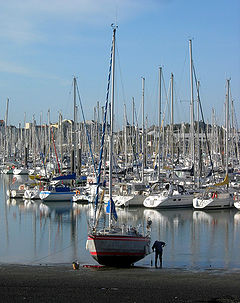 Careening a sailing vessel
Ship
Since the end of the age of sail a ship has been any large buoyant marine vessel. Ships are generally distinguished from boats based on size and cargo or passenger capacity. Ships are used on lakes, seas, and rivers for a variety of activities, such as the transport of people or goods, fishing,...
is the practice of beaching
Beach (nautical)
Beaching is when a vessel is laid ashore, or grounded deliberately in shallow water. This is more usual with small flat-bottomed boats. Larger ships may be beached deliberately, for instance in an emergency a damaged ship might be beached to prevent it from sinking in deep water...
it at high tide
Tide
Tides are the rise and fall of sea levels caused by the combined effects of the gravitational forces exerted by the moon and the sun and the rotation of the Earth....
. This is usually done in order to expose one side or another of the ship's hull
Hull (watercraft)
A hull is the watertight body of a ship or boat. Above the hull is the superstructure and/or deckhouse, where present. The line where the hull meets the water surface is called the waterline.The structure of the hull varies depending on the vessel type...
for maintenance and repairs below the water line when the tide goes out.

The process could be assisted by securing a top halyard
Halyard
In sailing, a halyard or halliard is a line that is used to hoist a sail, a flag or a yard. The term halyard comes from the phrase, 'to haul yards'...
to a fixed object such as a tree or rock to pull the mast
Mast (sailing)
The mast of a sailing vessel is a tall, vertical, or near vertical, spar, or arrangement of spars, which supports the sails. Large ships have several masts, with the size and configuration depending on the style of ship...
over as far as possible. Maintenance might include repairing damage caused by dry rot
Dry rot
Dry rot refers to a type of wood decay caused by certain types of fungi, also known as True Dry Rot, that digests parts of the wood which give the wood strength and stiffness...
or cannon
Cannon
A cannon is any piece of artillery that uses gunpowder or other usually explosive-based propellents to launch a projectile. Cannon vary in caliber, range, mobility, rate of fire, angle of fire, and firepower; different forms of cannon combine and balance these attributes in varying degrees,...
shot, tar
Tar
Tar is modified pitch produced primarily from the wood and roots of pine by destructive distillation under pyrolysis. Production and trade in tar was a major contributor in the economies of Northern Europe and Colonial America. Its main use was in preserving wooden vessels against rot. The largest...
ring the exterior to reduce leakage, or removing biofouling
Biofouling
Biofouling or biological fouling is the undesirable accumulation of microorganisms, plants, algae, or animals on wetted structures.-Impact:...
organisms such as barnacle
Barnacle
A barnacle is a type of arthropod belonging to infraclass Cirripedia in the subphylum Crustacea, and is hence related to crabs and lobsters. Barnacles are exclusively marine, and tend to live in shallow and tidal waters, typically in erosive settings. They are sessile suspension feeders, and have...
s to increase the ship's speed.

Pirates would often careen their ships because they had no access to drydocks.

A secluded bay would suffice for necessary repairs and/or hull cleaning, and such little “safe havens” could be found throughout the islands in the Caribbean
Caribbean
The Caribbean is a crescent-shaped group of islands more than 2,000 miles long separating the Gulf of Mexico and the Caribbean Sea, to the west and south, from the Atlantic Ocean, to the east and north...
and nearly around the world. One group of islands, Tres Marias
Três Marias
Três Marias is a small Brazilian city in northwestern Minas Gerais. In 2007 the population was 26,431 in a total area of 2,763 km².-Climate:...
, became popular when Francis Drake
Francis Drake
Sir Francis Drake, Vice Admiral was an English sea captain, privateer, navigator, slaver, and politician of the Elizabethan era. Elizabeth I of England awarded Drake a knighthood in 1581. He was second-in-command of the English fleet against the Spanish Armada in 1588. He also carried out the...
had sailed there in 1579 and quickly became a place for piracy.

One exotic method was the ancient practice of beaching a ship on a shingle beach
Shingle beach
A shingle beach is a beach which is armoured with pebbles or small- to medium-sized cobbles. Typically, the stone composition may grade from characteristic sizes ranging from two to 200 mm diameter....
with the goal of using wave action and the shingle to scour the hull.

Robert Louis Stevenson
Robert Louis Stevenson
Robert Louis Balfour Stevenson was a Scottish novelist, poet, essayist and travel writer. His best-known books include Treasure Island, Kidnapped, and Strange Case of Dr Jekyll and Mr Hyde....
's Treasure Island
Treasure Island
Treasure Island is an adventure novel by Scottish author Robert Louis Stevenson, narrating a tale of "pirates and buried gold". First published as a book on May 23, 1883, it was originally serialized in the children's magazine Young Folks between 1881–82 under the title Treasure Island; or, the...
contains a reference to the practice: the Hispaniola is purposely beached on the island. Although the purpose of this is to avoid the uncertainties of anchoring her with nobody aboard, that a piratical crew member would be quick with the suggestion—and the means of freeing the ship later—shows his familiarity with the practice.
The source of this article is wikipedia, the free encyclopedia.  The text of this article is licensed under the GFDL.