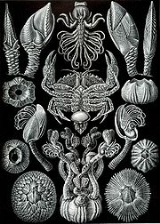 Overview
A barnacle is a type of arthropod
Arthropod
An arthropod is an invertebrate animal having an exoskeleton , a segmented body, and jointed appendages. Arthropods are members of the phylum Arthropoda , and include the insects, arachnids, crustaceans, and others...
belonging to infraclass Cirripedia in the subphylum Crustacea
Crustacean
Crustaceans form a very large group of arthropods, usually treated as a subphylum, which includes such familiar animals as crabs, lobsters, crayfish, shrimp, krill and barnacles. The 50,000 described species range in size from Stygotantulus stocki at , to the Japanese spider crab with a leg span...
, and is hence related to crab
Crab
True crabs are decapod crustaceans of the infraorder Brachyura, which typically have a very short projecting "tail" , or where the reduced abdomen is entirely hidden under the thorax...
s and lobster
Lobster
Clawed lobsters comprise a family of large marine crustaceans. Highly prized as seafood, lobsters are economically important, and are often one of the most profitable commodities in coastal areas they populate.Though several groups of crustaceans are known as lobsters, the clawed lobsters are most...
s. Barnacles are exclusively marine, and tend to live in shallow and tidal waters, typically in erosive settings. They are sessile
Sessility (zoology)
In zoology, sessility is a characteristic of animals which are not able to move about. They are usually permanently attached to a solid substrate of some kind, such as a part of a plant or dead tree trunk, a rock, or the hull of a ship in the case of barnacles. Corals lay down their own...
(non-motile) suspension feeders
Filter feeder
Filter feeders are animals that feed by straining suspended matter and food particles from water, typically by passing the water over a specialized filtering structure. Some animals that use this method of feeding are clams, krill, sponges, baleen whales, and many fish and some sharks. Some birds,...
, and have two nekton
Nekton
Nekton refers to the aggregate of actively swimming aquatic organisms in a body of water able to move independently of water currents....
ic (active swimming) larval stages. Around 1,220 barnacle species
Species
In biology, a species is one of the basic units of biological classification and a taxonomic rank. A species is often defined as a group of organisms capable of interbreeding and producing fertile offspring. While in many cases this definition is adequate, more precise or differing measures are...
are currently known. The name "Cirripedia" is Latin
Latin
Latin is an Italic language originally spoken in Latium and Ancient Rome. It, along with most European languages, is a descendant of the ancient Proto-Indo-European language. Although it is considered a dead language, a number of scholars and members of the Christian clergy speak it fluently, and...
, meaning "curl-footed".
Barnacles are encrusters, attaching themselves permanently to a hard substrate.

How barnacles began life drifting in a larval stage?

Do Barnacles grow in fresh water

I have acorn barnacles in my temperate marine aquarium. One barnacle ejected a white cloud into the water. What was that? Thanks
More
x