Dry rot refers to a type of wood decay caused by certain types of fungi, also known as True Dry Rot, that digests parts of the wood which give the wood strength and stiffness. It was previously used to describe any decay of cured wood in ships and buildings by a fungus which resulted in a darkly colored deteriorated and cracked condition.

In other fields, the term has been applied to the decay of crop plants by fungi and the deterioration of rubber
Rubber
Natural rubber, also called India rubber or caoutchouc, is an elastomer that was originally derived from latex, a milky colloid produced by some plants. The plants would be ‘tapped’, that is, an incision made into the bark of the tree and the sticky, milk colored latex sap collected and refined...
.

In addition, the term can be used as a metaphor
Metaphor
A metaphor is a literary figure of speech that uses an image, story or tangible thing to represent a less tangible thing or some intangible quality or idea; e.g., "Her eyes were glistening jewels." Metaphor may also be used for any rhetorical figures of speech that achieve their effects via...
for grave underlying problems within a large organization (such as political corruption
Political corruption
Political corruption is the use of legislated powers by government officials for illegitimate private gain. Misuse of government power for other purposes, such as repression of political opponents and general police brutality, is not considered political corruption. Neither are illegal acts by...
in government
Government
Government refers to the legislators, administrators, and arbitrators in the administrative bureaucracy who control a state at a given time, and to the system of government by which they are organized...
or low morale in the armed forces
Armed forces
The armed forces of a country are its government-sponsored defense, fighting forces, and organizations. They exist to further the foreign and domestic policies of their governing body, and to defend that body and the nation it represents from external aggressors. In some countries paramilitary...
) that show no symptoms until a sudden, catastrophic failure, much as dry rot of wood in ships caused catastrophic failure.

Dry rot is type of brown rot decay caused by certain fungi that deteriorate timber in buildings and other wooden construction without an apparent source of moisture, which is also known as true dry rot. The decayed wood takes on a dark or browner crumbly appearance, with cubical like cracking or checking, that becomes brittle and can eventually crush the wood into powder. An outbreak of certain types of a true dry rot fungus within a building is considered to be an extremely serious infestation that is hard to eradicate, and usually requires drastic remedies to correct. Eventually the decay can cause instability and collapse in structures.

The term dry rot, or true dry rot, refers to the decay of timbers from only certain types of fungi that can provide their own source of moisture and nutrients, and cause decay in otherwise relatively dry timber. It is used in reference to damage inflicted by either: Serpula lacrymans
Serpula lacrymans
Serpula lacrymans is one of the fungi that are responsible for dry rot. It is a basidiomycete in the order Boletales.-Taxonomy:The species was first described under the name Boletus lacrymans by Franz Xavier von Wulfen in 1781...
(formerly Merulius lacrymans) predominantly in the United Kingdom
United Kingdom
The United Kingdom of Great Britain and Northern IrelandIn the United Kingdom and Dependencies, other languages have been officially recognised as legitimate autochthonous languages under the European Charter for Regional or Minority Languages...
and northern Europe; and/or Meruliporia incrassata (which has a number of synonyms, including Poria incrassata and Serpula incrassata) in North America
North America
North America is a continent wholly within the Northern Hemisphere and almost wholly within the Western Hemisphere. It is also considered a northern subcontinent of the Americas...
. Such fungi have water-conducting strands and are capable of carrying water and nutrients (usually from soil) into buildings, where they rot timber that would otherwise be dry. Both species of fungi cause brown rot decay, preferentially removing cellulose
Cellulose
Cellulose is an organic compound with the formula , a polysaccharide consisting of a linear chain of several hundred to over ten thousand β linked D-glucose units....
and hemicellulose
Hemicellulose
A hemicellulose is any of several heteropolymers , such as arabinoxylans, present along with cellulose in almost all plant cell walls. While cellulose is crystalline, strong, and resistant to hydrolysis, hemicellulose has a random, amorphous structure with little strength...
from the timber leaving a brittle matrix of modified lignin
Lignin
Lignin or lignen is a complex chemical compound most commonly derived from wood, and an integral part of the secondary cell walls of plants and some algae. The term was introduced in 1819 by de Candolle and is derived from the Latin word lignum, meaning wood...
.

Schilling & Jellison note the potential efficiency of these 'dry rot' fungi in growing away from direct moisture sources, although there is no reference for how efficient a brown rot fungus has to be at translocating water in order to be classed as 'dry rot'. Some have suggested the importance of these fungi providing their own source of nutrients as being more significant than providing an adequate source of moisture. Schilling suggests efficient nutrient translocation and utilization, notably nitrogen and iron, may be more distinctive in these species than water translocation. Water translocated in this fashion carries nutrients to the extremities of the organism; not, as is sometimes inferred, to simply render dry timber wet enough to attack. Coggins goes into more detail about water movement in Serpula lacrymans.

The perpetual saturation of wood with water also inhibits dry rot, as does perpetual dryness.

Dry rot would appear to be a paradox
Paradox
Similar to Circular reasoning, A paradox is a seemingly true statement or group of statements that lead to a contradiction or a situation which seems to defy logic or intuition...
ical term seemingly indicating decay of a substance by a fungus without the presence of water. However, its historical usage dates back to the distinction between decay of cured wood in construction, i.e. dry wood, versus decay of wood in living or newly felled trees, i.e. wet wood.


Historical use of the term "dry rot"

'Dry rot' is an eighteenth-century term that generally described what is now called brown rot
Brown rot
Brown rot may refer to the following diseases:*Wood-decay fungus, a disease of trees and wood.*Ralstonia solanacearum, a disease of plants caused by bacteria.*Monilinia fructicola, a disease of stone fruits....
. The term was used because the damage was present in cured or dried timber of ships and buildings and was thought to be caused by internal ‘fermentations’ rather than water.

The (London) Times on Tuesday 12 March 1793 carried an advertisement that informs the reader that the British Colour Company, No. 32, Walbrook, London continues to use, manufacture and sell paints prepared with the Oil of Coal, which is of a very penetrating nature, and hardens wood in an uncommon degree protecting it from weather, dry rot and ice.

In the early nineteenth century the rapid increase in instances of timber decay attributed to dry rot (brown rot) in the British naval fleet brought the term into wider usage. Thomas Wade's 'A Treatise on the Dry Rot in Timber' was published posthumously by the Navy Office in 1815 following his investigation of the matter in ships from various countries. The second was launched in 1810 and, when inspected, the timbers of the upper decks were found to be infected with 'the dry rot'. By 1816 the cost of repairs for this vessel had exceeded the ship's original construction cost.

Eventually, the term dry rot came to apply to only one or two fungi: the main one being 'Serpula lacrymans
Serpula lacrymans
Serpula lacrymans is one of the fungi that are responsible for dry rot. It is a basidiomycete in the order Boletales.-Taxonomy:The species was first described under the name Boletus lacrymans by Franz Xavier von Wulfen in 1781...
', which have water-conducting strands capable of carrying water and nutrients to decay timber that would otherwise be relatively dry. This type of fungal decay subsequently also became known as 'true dry rot'. It has even been proposed to use the term water-conducting fungi in the category of brown rot rather than dry rot. However, although the fungi such as S. Lacrymans can transport water, it is disputed that it can use this water to increase the moisture content of otherwise dry wood.

There are epoxy treatments available that kill rot by filling in the channels of the damaged wood, killing the rot and restoring structural integrity. Commercial antifreeze
Antifreeze
Antifreeze is a freeze preventive used in internal combustion engines and other heat transfer applications, such as HVAC chillers and solar water heaters....
(ethylene glycol
Ethylene glycol
Ethylene glycol is an organic compound widely used as an automotive antifreeze and a precursor to polymers. In its pure form, it is an odorless, colorless, syrupy, sweet-tasting liquid...
) is also very effective at preventing dry rot formation as well as killing the fungus. Certain copper
Copper
Copper is a chemical element with the symbol Cu and atomic number 29. It is a ductile metal with very high thermal and electrical conductivity. Pure copper is soft and malleable; an exposed surface has a reddish-orange tarnish...
compounds, such as copper naphthenate, are available as a brushable solution and are frequently used when dry-rot damage is repaired by splicing in new wood; after removal of bulk rotten wood the remaining original surface is saturated with such a compound (typically green in color) before application of the new wood.

In certain buildings, particularly those with solid 9 inch (or greater) brickwork and those built using lime mortar
Lime mortar
Lime mortar is a type of mortar composed of lime and an aggregate such as sand, mixed with water. It is one of the oldest known types of mortar, dating back to the 4th century BC and widely used in Ancient Rome and Greece, when it largely replaced the clay and gypsum mortars common to Ancient...
and flintstone
Flint
Flint is a hard, sedimentary cryptocrystalline form of the mineral quartz, categorized as a variety of chert. It occurs chiefly as nodules and masses in sedimentary rocks, such as chalks and limestones. Inside the nodule, flint is usually dark grey, black, green, white, or brown in colour, and...
, dry rot has been known to travel through and along the wall surface behind plaster and render. It is therefore recommended that where dry rot is found, plaster and wall coverings should be stripped back to a metre past the infestation in all directions, and the whole area treated. However, given that dry rot attacks only wet timber, common sense should dictate that plaster need not be removed where there is no timber or any timber is dry (outside the zone of wetting that caused the outbreak). Identifying the source of water and allowing the affected timbers to dry will kill dry rot, as it is a fungus and requires water as all fungi do. 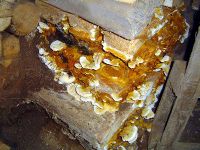