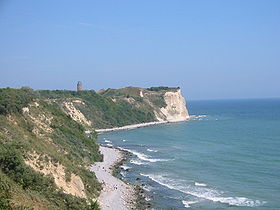 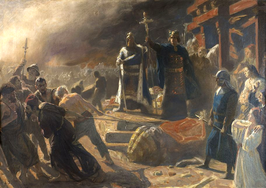 Cape Arkona is a cape
Headlands and bays
Headlands and bays are two related features of the coastal environment.- Geology and geography :Headlands and bays are often found on the same coastline. A bay is surrounded by land on three sides, whereas a headland is surrounded by water on three sides. Headlands are characterized by high,...
on the island of Rügen
Rügen
Rügen is Germany's largest island. Located in the Baltic Sea, it is part of the Vorpommern-Rügen district of Mecklenburg-Vorpommern.- Geography :Rügen is located off the north-eastern coast of Germany in the Baltic Sea...
in Mecklenburg-Vorpommern, Germany
Germany
Germany , officially the Federal Republic of Germany , is a federal parliamentary republic in Europe. The country consists of 16 states while the capital and largest city is Berlin. Germany covers an area of 357,021 km2 and has a largely temperate seasonal climate...
. Cape Arkona is the tip of the Wittow
Wittow
Wittow is the northernmost peninsula of the island of Rügen. Wittow was a separate isle until the High Middle Ages, since then it is connected to the Jasmund peninsula of Rügen by the Schaabe spit. Wittow is most famous for Cape Arkona hosting the remnants of a former Rani temple burgh....
peninsula, just a few kilometres north of the Jasmund National Park
Jasmund National Park
The Jasmund National Park is a nature reserve in the Jasmund peninsula, in the northeast of Rügen island in Mecklenburg-Vorpommern, Germany. It is famous for the largest chalk cliffs of Germany, the so called Königsstuhl . These cliffs are up to 161 m high above the Baltic Sea...
.

The temple fortress of Arkona, today called Jaromarsburg, was the religious centre of the Slavic
Slavic peoples
The Slavic people are an Indo-European panethnicity living in Eastern Europe, Southeast Europe, North Asia and Central Asia. The term Slavic represents a broad ethno-linguistic group of people, who speak languages belonging to the Slavic language family and share, to varying degrees, certain...
Rani
Rani (Slavic tribe)
The Rani or Rujani were a West Slavic tribe based on the island of Rugia and the southwestern mainland across the Strelasund in what is today northeastern Germany....
in the Early Middle Ages
Early Middle Ages
The Early Middle Ages was the period of European history lasting from the 5th century to approximately 1000. The Early Middle Ages followed the decline of the Western Roman Empire and preceded the High Middle Ages...
. The temple was dedicated to the deity Svantevit, who was depicted with four heads. The temple housed an important horse oracle
Horse worship
Horse worship is a pagan practice that existed in Europe in the Iron Age and perhaps the Bronze Age. The horse was seen as divine, as a sacred animal associated with a particular deity, or as a totem animal impersonating the king or warrior. Horse cults and horse sacrifice were originally a feature...
in Slavic times, where the behaviour of a white stallion could decide peace or war (horse oracles have a long history in this region, being already attested in the writings of Tacitus).

Today, only about a quarter of the old fortress is left, as the chalk
Chalk
Chalk is a soft, white, porous sedimentary rock, a form of limestone composed of the mineral calcite. Calcite is calcium carbonate or CaCO3. It forms under reasonably deep marine conditions from the gradual accumulation of minute calcite plates shed from micro-organisms called coccolithophores....
-promontory it was built on is slowly eroded by the Baltic. Rescue excavations are in progress.

The fortress at Arkona was destroyed in 1168 by Danish
Denmark
Denmark is a Scandinavian country in Northern Europe. The countries of Denmark and Greenland, as well as the Faroe Islands, constitute the Kingdom of Denmark . It is the southernmost of the Nordic countries, southwest of Sweden and south of Norway, and bordered to the south by Germany. Denmark...
invaders (see Absalon
Absalon
Absalon was a Danish archbishop and statesman, who was the Bishop of Roskilde from 1158 to 1192 and Archbishop of Lund from 1178 until his death. He was the foremost politician and churchfather of Denmark in the second half of the 12th century, and was the closest advisor of King Valdemar I of...
). The sanctuary of Slavic god Svantevit was also destroyed. This event preceded the forced Christianization
Christianization
The historical phenomenon of Christianization is the conversion of individuals to Christianity or the conversion of entire peoples at once...
of the region's inhabitants.

There are two old lighthouse
Lighthouse
A lighthouse is a tower, building, or other type of structure designed to emit light from a system of lamps and lenses or, in older times, from a fire, and used as an aid to navigation for maritime pilots at sea or on inland waterways....
s at the cape, one constructed in 1827, the other one in 1902. The former is one of the oldest still existing lighthouses of the Baltic Sea
Baltic Sea
The Baltic Sea is a brackish mediterranean sea located in Northern Europe, from 53°N to 66°N latitude and from 20°E to 26°E longitude. It is bounded by the Scandinavian Peninsula, the mainland of Europe, and the Danish islands. It drains into the Kattegat by way of the Øresund, the Great Belt and...
. It was constructed by the famous architect Karl Friedrich Schinkel
Karl Friedrich Schinkel
Karl Friedrich Schinkel was a Prussian architect, city planner, and painter who also designed furniture and stage sets. Schinkel was one of the most prominent architects of Germany and designed both neoclassical and neogothic buildings.-Biography:Schinkel was born in Neuruppin, Margraviate of...
.

In 1927, the cape's name was given to a German liner
Ocean liner
An ocean liner is a ship designed to transport people from one seaport to another along regular long-distance maritime routes according to a schedule. Liners may also carry cargo or mail, and may sometimes be used for other purposes .Cargo vessels running to a schedule are sometimes referred to as...
, the SS Cap Arcona
SS Cap Arcona
The Cap Arcona was a large German luxury ocean liner, formerly of the Hamburg-South America line. It transported passengers between Germany and South America up until 1940 when it was taken over by the German Navy....
.