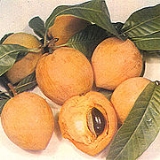 Overview
The canistel is an evergreen
Evergreen
In botany, an evergreen plant is a plant that has leaves in all seasons. This contrasts with deciduous plants, which completely lose their foliage during the winter or dry season.There are many different kinds of evergreen plants, both trees and shrubs...
tree
Tree
A tree is a perennial woody plant. It is most often defined as a woody plant that has many secondary branches supported clear of the ground on a single main stem or trunk with clear apical dominance. A minimum height specification at maturity is cited by some authors, varying from 3 m to...
native to southern Mexico
Mexico
The United Mexican States , commonly known as Mexico , is a federal constitutional republic in North America. It is bordered on the north by the United States; on the south and west by the Pacific Ocean; on the southeast by Guatemala, Belize, and the Caribbean Sea; and on the east by the Gulf of...
and Central America
Central America
Central America is the central geographic region of the Americas. It is the southernmost, isthmian portion of the North American continent, which connects with South America on the southeast. When considered part of the unified continental model, it is considered a subcontinent...
. It is cultivated in other countries, such as Brazil
Brazil
Brazil , officially the Federative Republic of Brazil , is the largest country in South America. It is the world's fifth largest country, both by geographical area and by population with over 192 million people...
, Taiwan
Taiwan
Taiwan , also known, especially in the past, as Formosa , is the largest island of the same-named island group of East Asia in the western Pacific Ocean and located off the southeastern coast of mainland China. The island forms over 99% of the current territory of the Republic of China following...
, and Vietnam
Vietnam
Vietnam – sometimes spelled Viet Nam , officially the Socialist Republic of Vietnam – is the easternmost country on the Indochina Peninsula in Southeast Asia. It is bordered by China to the north, Laos to the northwest, Cambodia to the southwest, and the South China Sea –...
for its fruit.

The canistel grows up to 10 metres (32.8 ft) high, and produces orange-yellow fruit, also called yellow sapote, up to 7 centimetres (2.8 in) long, which are edible raw. Canistel flesh is sweet, with a texture often compared to that of a cooked egg
Egg (food)
Eggs are laid by females of many different species, including birds, reptiles, amphibians, and fish, and have probably been eaten by mankind for millennia. Bird and reptile eggs consist of a protective eggshell, albumen , and vitellus , contained within various thin membranes...
yolk, hence its colloquial name of "eggfruit." It is closely related to the Mamey sapote
Mamey sapote
The mamey sapote is a species of tree native to southern Mexico. Today, the tree is cultivated not only in Mexico, but also in Central America, the Caribbean, and South Florida for its fruit, which is commonly eaten in many Latin American countries...
and abiu
Abiu
Pouteria caimito, the abiu, is a tropical fruit tree originated in the Amazonian region of South America. It will grow an average of high, and can grow as high as under good conditions. Its fruit’s shape varies from round to oval with a point. When ripe, it has smooth bright yellow skin and will...
.
Its binomial name is derived from the Mexican town of Campeche
Campeche, Campeche
San Francisco de Campeche is the capital city of the Mexican state of Campeche, located at,...
, where it is native.