Encyclopedia
Canada's Aviation Hall of Fame, based in the Reynolds-Alberta Museum
Reynolds-Alberta Museum
The Reynolds-Alberta Museum, in Wetaskiwin, Alberta, Canada, one of 18 provincially owned and operated historic sites and museums, honours the "spirit of the machine"...
in Wetaskiwin, Alberta
Alberta
Alberta is a province of Canada. It had an estimated population of 3.7 million in 2010 making it the most populous of Canada's three prairie provinces...
, Canada
Canada
Canada is a North American country consisting of ten provinces and three territories. Located in the northern part of the continent, it extends from the Atlantic Ocean in the east to the Pacific Ocean in the west, and northward into the Arctic Ocean...
, commemorates and honours those whose accomplishments in aviation
Aviation
Aviation is the design, development, production, operation, and use of aircraft, especially heavier-than-air aircraft. Aviation is derived from avis, the Latin word for bird.-History:...
contributed so much to Canada's development as a nation. Founded in 1973, the Hall of Fame has honoured thus far more than 200 aviators, engineers, technicians and administrators.

Due to its size and geographical location, Canada has had to rely upon aviation much more than other countries. With so much territory unsuitable for surface travel, it was up to aviation to unite the country and bring the distant regions the opportunities for social and economic progress that would make them part of Canada. The unique combination of pioneering aviation and pioneering development of the country resulted in many outstanding examples of heroism, skill, tenacity, courage, wisdom, and luck, and many great stories to be told. The best of these stories are described in the Aviation Hall of Fame.

Stories are told on four by eight foot panels with portraits, citations, photographs, and memorabilia. The Hall has an extensive collection of personal items and memorabilia related to inducted members, including such material as licenses, logbooks, uniforms, insignia, medals, trophies and awards, documents, correspondence, scrapbooks and photographs. The reference library contains approximately 2,500 books and over 12,000 periodicals related specifically to Canadian aviation. Items are loaned to other museums in Canada for exhibit purposes, and may be accessed by researchers and visitors, by appointment.

The Hall of Fame also awards the Belt of Orion each year at its annual induction dinner, to an organization notable for its contribution to Canadian aviation.

Canada's Aviation Hall of Fame was incorporated August 2, 1973. The 79 original members included all Companions of the Order of Icarus
Order of Icarus
The Order of Icarus is the highest aviation award next to the Trans-Canada Trophy that is awarded to Canadian aviators who have made a lasting contribution to manned flight. The order ceased existence in 1981.-Creation:...
, all who had been awarded the Trans-Canada (McKee) Trophy
Trans-Canada Trophy
The Trans-Canada Trophy, also known as the McKee Trophy, is awarded by the Canadian Aeronautics and Space Institute to a Canadian citizen who has made an outstanding, contemporary achievement in aerospace operations, whether a single act within the year prior to the award or a sustained level of...
, all recipients of the Victoria Cross
Victoria Cross
The Victoria Cross is the highest military decoration awarded for valour "in the face of the enemy" to members of the armed forces of various Commonwealth countries, and previous British Empire territories....
in aerial combat, Alexander Graham Bell
Alexander Graham Bell
Alexander Graham Bell was an eminent scientist, inventor, engineer and innovator who is credited with inventing the first practical telephone....
and F.W. "Casey" Baldwin
Frederick W. Baldwin
Frederick Walker Baldwin , also known as Casey Baldwin, was an engineer and a hydrofoil and aviation pioneer who was also the first Canadian to pilot an aircraft.-Biography:...
for designing and building the Silver Dart
Silver Dart
Silver Dart may refer to:*AEA Silver Dart - An early aircraft which was flown off the ice at Baddeck, Nova Scotia on February 23, 1909. This was the first controlled powered flight in Canada....
, and Group Captain John Emilius Fauquier
John Emilius Fauquier
John Emilius “Johnny” Fauquier DSO & Two Bars, DFC was a Canadian aviator and Second World War Bomber Command leader. He commanded No. 405 Squadron RCAF and later No. 617 Squadron RAF over the course of the war. A bush pilot, prior to the war, he joined the RCAF as a flight instructor in 1939. He...
representing World War II
World War II
World War II, or the Second World War , was a global conflict lasting from 1939 to 1945, involving most of the world's nations—including all of the great powers—eventually forming two opposing military alliances: the Allies and the Axis...
RAF Bomber Command
RAF Bomber Command
RAF Bomber Command controlled the RAF's bomber forces from 1936 to 1968. During World War II the command destroyed a significant proportion of Nazi Germany's industries and many German cities, and in the 1960s stood at the peak of its postwar military power with the V bombers and a supplemental...
and Flight Lieutenant George Frederick "Buzz" Beurling
George Beurling
George Frederick "Buzz" Beurling DSO, DFC, DFM & Bar, RCAF , was the most successful Canadian fighter pilot of the Second World War....
representing World War II RAF Fighter Command
RAF Fighter Command
RAF Fighter Command was one of three functional commands of the Royal Air Force. It was formed in 1936 to allow more specialised control of fighter aircraft. It served throughout the Second World War, gaining recognition in the Battle of Britain. The Command continued until 17 November 1943, when...
. A confidential nomination review committee reviews nominations for new members of the Hall of Fame, looking for contributions of major benefit to Canada which have stood the test of time.

The Hall of Fame officially opened on the first day of Klondike Days, July 17, 1974, in the Sportex Building at the Edmonton Exhibition Grounds. During the initial years it moved several times until finally residing in the Edmonton Convention Centre for several years. When the Reynolds-Alberta Museum
Reynolds-Alberta Museum
The Reynolds-Alberta Museum, in Wetaskiwin, Alberta, Canada, one of 18 provincially owned and operated historic sites and museums, honours the "spirit of the machine"...
opened near Wetaskiwin, Alberta
Alberta
Alberta is a province of Canada. It had an estimated population of 3.7 million in 2010 making it the most populous of Canada's three prairie provinces...
, in 1992, the Hall of Fame moved to the museum's aviation hangar, combining and merging its exhibits with the museum's extensive aviation collection.

The Hall has inducted the following people, arranged in alphabetical order, with their year of induction in parentheses. 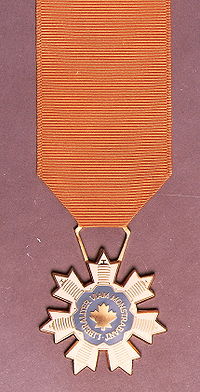 The Belt of Orion Award for Excellence was founded by the Aviation Hall of Fame in 1988, to honour organizations, groups, societies or associations who have made outstanding contributions to the advancement of aviation in Canada. Recipients include:

The Museum is affiliated with: CMA
Canadian Museums Association
The Canadian Museums Association is a national organization for the promotion of museums in Canada.The Canadian Museums Association is the national organization for the advancement of the Canadian museum sector, representing Canadian museum professionals both within Canada and internationally. The...
, CHIN
Canadian Heritage Information Network
The Canadian Heritage Information Network is a Canadian government-supported organization that provides a networked interface to Canada's heritage, largely through the World Wide Web. It aims to give access to Canada's heritage for both Canadians and a worldwide audience, by supporting the...
, Virtual Museum of Canada
Virtual Museum of Canada
The Virtual Museum of Canada is Canada's national virtual museum. With a directory of over 3,000 Canadian heritage institutions and a database of over 600 virtual exhibits, the VMC brings together Canada's museums regardless of size or geographical location.The VMC includes virtual exhibits,...
, and Canadian Aeronautical Preservation Association (CAPA).
The source of this article is wikipedia, the free encyclopedia.  The text of this article is licensed under the GFDL.