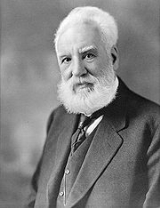 Overview
Alexander Graham Bell (March 3, 1847 –August 2, 1922) was an eminent scientist, inventor, engineer and innovator who is credited with inventing the first practical telephone.

Bell's father, grandfather, and brother had all been associated with work on elocution
Elocution
Elocution is the study of formal speaking in pronunciation, grammar, style, and tone.-History:In Western classical rhetoric, elocution was one of the five core disciplines of pronunciation, which was the art of delivering speeches. Orators were trained not only on proper diction, but on the proper...
and speech, and both his mother and wife were deaf, profoundly influencing Bell's life's work. His research on hearing and speech further led him to experiment with hearing devices which eventually culminated in Bell being awarded the first US patent
United States patent law
United States patent law was established "to promote the Progress of Science and useful Arts, by securing for limited Times to Authors and Inventors the exclusive Right to their respective Writings and Discoveries;" as provided by the United States Constitution. Congress implemented these...
for the telephone in 1876.

Invention of the telephone

Bell's work with the deaf

Who were some of Bell's competitors?
More

The final result of our researches has widened the class of substances sensitive to light vibrations, until we can propound the fact of such sensitiveness being a general property of all matter.

Statement to the American Association for the Advancement of Science, in Boston, Massachusetts (27 August 1880): published as "On the Production and Reproduction of Sound by Light" in American Journal of Sciences, Third Series, vol. XX, n°118 (October 1880), pp. 305- 324.

Before anything else, preparation is the key to success.

Neither the Army nor the Navy is of any protection, or very little protection, against aerial raids.

As quoted in The Military Quotation Book by James Charlton, p. 37

I begin my work at about nine or ten o'clock in the evening and continue until four or five in the morning. Night is a more quiet time to work. It aids thought.

Perseverance must have some practical end, or it does not avail the man possessing it. A person without a practical end in view becomes a crank or an idiot. Such persons fill our asylums.

I am a believer in unconscious cerebration. The brain is working all the time, though we do not know it. At night it follows up what we think in the daytime. When I have worked a long time on one thing, I make it a point to bring all the facts regarding it together before I retire; I have often been surprised at the results... We are thinking all the time; it is impossible not to think.