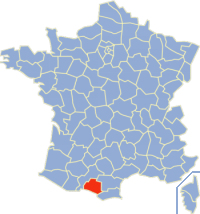 Le Vernet Internment Camp, or Camp Vernet, was a concentration camp
Internment
Internment is the imprisonment or confinement of people, commonly in large groups, without trial. The Oxford English Dictionary gives the meaning as: "The action of 'interning'; confinement within the limits of a country or place." Most modern usage is about individuals, and there is a distinction...
in Le Vernet
Le Vernet, Ariège
Le Vernet is a commune in the Ariège department in southwestern France.-Population:Inhabitants of Le Vernet are called Vernétois.-History:...
, Ariège
Ariège
Ariège is a department in southwestern France named after the Ariège River.- History :Ariège is one of the original 83 departments created during the French Revolution on 4 March 1790. It was created from the counties of Foix and Couserans....
, near Pamiers
Pamiers
Pamiers is a commune in the Ariège department in the Midi-Pyrénées region in southwestern France. It is a sub-prefecture of the department. Although Pamiers is the largest city in Ariège, the capital is the smaller town of Foix...
, in the French Pyrenees
French Pyrenees
The French Pyrenees is a large mountain range on the French-Spanish border that is part of the following départements, from east to west: Pyrénées-Orientales, Aude, Ariège, Haute-Garonne, Hautes-Pyrénées, and Pyrénées-Atlantiques ....
. It was originally built in June 1918 to house French colonial troops serving in World War I
World War I
World War I , which was predominantly called the World War or the Great War from its occurrence until 1939, and the First World War or World War I thereafter, was a major war centred in Europe that began on 28 July 1914 and lasted until 11 November 1918...
but when hostilities ceased it was used to hold German and Austrian prisoners of war.

Between the wars, it served as a military depot. Towards the end of the Spanish Civil War
Spanish Civil War
The Spanish Civil WarAlso known as The Crusade among Nationalists, the Fourth Carlist War among Carlists, and The Rebellion or Uprising among Republicans. was a major conflict fought in Spain from 17 July 1936 to 1 April 1939...
, in February 1939, it was put to a new use. It became a reception camp for Republicans fleeing from Francisco Franco
Francisco Franco
Francisco Franco y Bahamonde was a Spanish general, dictator and head of state of Spain from October 1936 , and de facto regent of the nominally restored Kingdom of Spain from 1947 until his death in November, 1975...
's armies after the collapse of the Second Spanish Republic
Second Spanish Republic
The Second Spanish Republic was the government of Spain between April 14 1931, and its destruction by a military rebellion, led by General Francisco Franco....
. At this time, it held mainly former soldiers from the Republican Durruti Division
Durruti Column
The Durruti Column was the largest anarchist column formed during the Spanish Civil War . During the first months of the war it has come to be the most recognized and popular military organisations fighting at the republican side...
.

With the outbreak of World War II
World War II
World War II, or the Second World War , was a global conflict lasting from 1939 to 1945, involving most of the world's nations—including all of the great powers—eventually forming two opposing military alliances: the Allies and the Axis...
, the role of the camp was expanded. It was used to house "undesirable" foreigners, in particular, anti-fascist intellectuals and former members of the International Brigades
International Brigades
The International Brigades were military units made up of volunteers from different countries, who traveled to Spain to defend the Second Spanish Republic in the Spanish Civil War between 1936 and 1939....
. After the Fall of France
Battle of France
In the Second World War, the Battle of France was the German invasion of France and the Low Countries, beginning on 10 May 1940, which ended the Phoney War. The battle consisted of two main operations. In the first, Fall Gelb , German armoured units pushed through the Ardennes, to cut off and...
on 25 June 1940, it was taken over by the pro-Nazi Vichy France
Vichy France
Vichy France, Vichy Regime, or Vichy Government, are common terms used to describe the government of France that collaborated with the Axis powers from July 1940 to August 1944. This government succeeded the Third Republic and preceded the Provisional Government of the French Republic...
authorities, to house "all foreigners considered suspect or dangerous to the public order".

From 1942, Le Vernet was used as a holding centre for Jewish families awaiting deportation to labour and extermination camps. The final transport took place in June 1944 and took the remaining prisoners to Dachau concentration camp. One source says that "about 40,000 persons of 58 nationalities were interned in the camp".