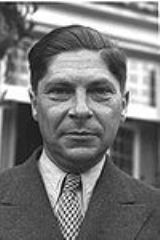 Overview
Arthur Koestler CBE
Order of the British Empire
The Most Excellent Order of the British Empire is an order of chivalry established on 4 June 1917 by George V of the United Kingdom. The Order comprises five classes in civil and military divisions...
(5 September 1905, Budapest – 3 March 1983, London) was a Hungarian author and journalist. Koestler was born in Budapest and, apart from his early school years, was educated in Austria. In 1931 Koestler joined the Communist Party of Germany
Communist Party of Germany
The Communist Party of Germany was a major political party in Germany between 1918 and 1933, and a minor party in West Germany in the postwar period until it was banned in 1956...
but, disillusioned by Stalinist atrocities, he resigned in 1938 and in 1940 published a devastating anti-totalitarian novel, Darkness at Noon
Darkness at Noon
Darkness at Noon is a novel by the Hungarian-born British novelist Arthur Koestler, first published in 1940...
, which propelled him to international fame.

Over the next 43 years, Koestler espoused many political causes and wrote novels, biographies, and numerous essays.

Look at this. Did you ever see a magazine called the New Musical Express? It turns out there is a pop group called The Police - I don't know why they are called that, presumably to distinguish them from the punks - and they've made an album of my essay The Ghost in the Machine. I didn't know anything about it until my clipping agency sent me a review of the record.

Indeed, the ideal for a well-functioning democratic state is like the ideal for a gentleman's well-cut suit- it is not noticed. For the common people of Britain, Gestapo|Gestapo and concentration camps have approximately the same degree of reality as the Loch Ness Monster|monster of Loch Ness. Atrocity propaganda is helpless against this healthy lack of imagination.

A Challenge to 'Knights in Rusty Armor, The New York Times, 14 February 1943

Without the hard little bits of marble which are called 'facts' or 'data' one cannot compose a mosaic; what matters, however, are not so much the individual bits, but the successive patterns into which you arrange them, then break them up and rearrange them.

The Act of Creation

If one looks with a cold eye at the mess man has made of history, it is difficult to avoid the conclusion that he has been afflicted by some built-in mental disorder which drives him towards self-destruction.

The evolution of the brain not only overshot the needs of prehistoric man, it is the only example of evolution providing a species with an organ which it does not know how to use.

The Ghost in the Machine

... we find in the history of ideas mutations which do not seem to correspond to any obvious need, and at first sight appear as mere playful whimsies - such as Apollonius' work on conic sections, or the non-Euclidean geometries, whose practical value became apparent only later.