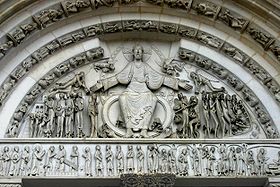 In architecture, a tympanum (plural, tympana) is the semi-circular or triangular decorative wall surface over an entrance, bounded by a lintel and arch
Arch
An arch is a structure that spans a space and supports a load. Arches appeared as early as the 2nd millennium BC in Mesopotamian brick architecture and their systematic use started with the Ancient Romans who were the first to apply the technique to a wide range of structures.-Technical aspects:The...
. It often contains sculpture or other imagery or ornaments. Most architectural styles include this element.

In ancient Greek and Roman and in Christian architecture tympana usually contain religious imagery. Bands of molding surrounding the tympanum are referred to as the archivolt
Archivolt
An archivolt is an ornamental molding or band following the curve on the underside of an arch. It is composed of bands of ornamental moldings surrounding an arched opening, corresponding to the architrave in the case of a rectangular opening...
.