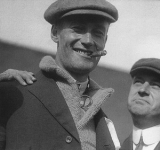 He was born on January 12, 1879 in Pittsburgh, Pennsylvania
Pittsburgh, Pennsylvania
Pittsburgh is the second-largest city in the US Commonwealth of Pennsylvania and the county seat of Allegheny County. Regionally, it anchors the largest urban area of Appalachia and the Ohio River Valley, and nationally, it is the 22nd-largest urban area in the United States...
, and later lived in Havre de Grace, Maryland
Havre de Grace, Maryland
Havre de Grace is a city in Harford County, Maryland, United States. Located at the mouth of the Susquehanna River and the head of the Chesapeake Bay, Havre de Grace is named after the port city of Le Havre, France, which was first named Le Havre de Grâce, meaning in French "Harbor of Grace." As...
. He was related to Commodores Oliver Hazard Perry
Oliver Hazard Perry
United States Navy Commodore Oliver Hazard Perry was born in South Kingstown, Rhode Island , the son of USN Captain Christopher Raymond Perry and Sarah Wallace Alexander, a direct descendant of William Wallace...
and Matthew Calbraith Perry and had a cousin, John Rodgers
John Rodgers (naval officer, World War I)
John Rodgers was an officer in the United States Navy and an early aviator.-Biography:Rodgers was the great-grandson of Commodores Rodgers and Perry. He was born in Washington, D.C. and graduated from the Naval Academy in 1903...
.

He contracted scarlet fever
Scarlet fever
Scarlet fever is a disease caused by exotoxin released by Streptococcus pyogenes. Once a major cause of death, it is now effectively treated with antibiotics...
which left him deaf in one ear and hearing impaired in the other ear. , in the Navy's Aerial Corps, learning to fly the Navy's newly purchased Wright airplane. In March 1911, he visited John at the Wright Company
Wright Company
The Wright Company was the commercial aviation business venture of the Wright Brothers, established by them in 1909 in conjunction with several prominent industrialists from New York and Detroit with the intention of capitalizing on their invention of the practical airplane. It maintained a...
factory and flying school in Dayton, Ohio
Dayton, Ohio
Dayton is the 6th largest city in the U.S. state of Ohio and the county seat of Montgomery County, the fifth most populous county in the state. The population was 141,527 at the 2010 census. The Dayton Metropolitan Statistical Area had a population of 841,502 in the 2010 census...
and became interested in aviation. He received 90 minutes of flying lessons from Orville Wright, and on August 7, 1911 he took his official flying examination at Huffman Prairie
Huffman Prairie
Huffman Prairie, also known as Huffman Prairie Flying Field or Huffman Field is part of Ohio's Dayton Aviation Heritage National Historical Park...
and became the 49th aviator licensed to fly by the Fédération Aéronautique Internationale
Fédération Aéronautique Internationale
The Fédération Aéronautique Internationale is the world governing body for air sports and aeronautics and astronautics world records. Its head office is in Lausanne, Switzerland. This includes man-carrying aerospace vehicles from balloons to spacecraft, and unmanned aerial vehicles...
. He was one of the first civilians to purchase a Wright Flyer
Wright Flyer
The Wright Flyer was the first powered aircraft, designed and built by the Wright brothers. They flew it four times on December 17, 1903 near the Kill Devil Hills, about four miles south of Kitty Hawk, North Carolina, U.S.The U.S...
.

The publisher William Randolph Hearst
William Randolph Hearst
William Randolph Hearst was an American business magnate and leading newspaper publisher. Hearst entered the publishing business in 1887, after taking control of The San Francisco Examiner from his father...
offered the Hearst prize
Hearst prize
The Hearst prize was a US$50,000 aviation prize offered by publisher William Randolph Hearst in 1910 to the first aviator to fly coast to coast across the United States, in either direction, in fewer than 30 days from start to finish.-History:...
, $US 50,000 to the first aviator to fly coast to coast, in either direction, in less than 30 days from start to finish. Rodgers had J. Ogden Armour
J. Ogden Armour
Jonathan Ogden Armour was an American meatpacking magnate in Chicago, and owner and president of Armour and Company. During his tenure as president, Armour & Co...
, of Armour and Company
Armour and Company
Armour & Company was an American slaughterhouse and meatpacking company founded in Chicago, Illinois, in 1867 by the Armour brothers, led by Philip Danforth Armour. By 1880, the company was Chicago's most important business and helped make the city and its Union Stock Yards the center of the...
, sponsored the flight, and in return he named the plane, a Wright Model EX designed for exhibition flights, after Armour's grape soft drink
Soft drink
A soft drink is a non-alcoholic beverage that typically contains water , a sweetener, and a flavoring agent...
Vin Fiz. (A previous attempt had been made by Harry Atwood).

Rodgers left from Sheepshead Bay, New York on September 17, 1911 at 4:30 pm. He reached Chicago on October 9, 1911. He crossed the Rocky Mountains
Rocky Mountains
The Rocky Mountains are a major mountain range in western North America. The Rocky Mountains stretch more than from the northernmost part of British Columbia, in western Canada, to New Mexico, in the southwestern United States...
, and on November 5, 1911 he landed at Tournament Park
Tournament Park
Tournament Park is a private park maintained by the California Institute of Technology in Pasadena, California. It was simply known as the "town lot" before renamed Tournament Park in 1900. It is best known for being the site of the first Rose Bowl Game in 1902, and the second to eighth Rose Bowl...
in Pasadena, California
Pasadena, California
Pasadena is a city in Los Angeles County, California, United States. Although famous for hosting the annual Rose Bowl football game and Tournament of Roses Parade, Pasadena is the home to many scientific and cultural institutions, including the California Institute of Technology , the Jet...
at 4:04 pm in front of 20,000 people. He had missed the prize deadline by 19 days. On December 10, 1911 he landed in Long Beach, California
Long Beach, California
Long Beach is a city situated in Los Angeles County in Southern California, on the Pacific coast of the United States. The city is the 36th-largest city in the nation and the seventh-largest in California. As of 2010, its population was 462,257...
and taxied his plane into the Pacific Ocean
Pacific Ocean
The Pacific Ocean is the largest of the Earth's oceanic divisions. It extends from the Arctic in the north to the Southern Ocean in the south, bounded by Asia and Australia in the west, and the Americas in the east.At 165.2 million square kilometres in area, this largest division of the World...
. He had carried the first transcontinental U.S. Mail pouch. The trip required 70 stops, and he paid the Wright brothers' technician Charlie Taylor
Charlie Taylor
Charles Edward Taylor built the first aircraft engine used by the Wright brothers and was a vital contributor of mechanical skills in the building and maintaining of early Wright engines and airplanes.-Biography:...
$70 a week to be his mechanic. Taylor followed the flight by train and performed maintenance for the next day's flight. The next transcontinental flight
Transcontinental flight
In the United States the term Transcontinental flight is travelling by air coast-to-coast over the continental United States.-History:The first transcontinental flight across the United States was made by Calbraith Perry Rodgers to win the Hearst prize offered by publisher William Randolph Hearst...
was made by Robert G. Fowler.

On April 3, 1912, while making an exhibition flight over Long Beach, California
Long Beach, California
Long Beach is a city situated in Los Angeles County in Southern California, on the Pacific coast of the United States. The city is the 36th-largest city in the nation and the seventh-largest in California. As of 2010, its population was 462,257...
, he flew into a flock of birds, causing the plane to crash into the ocean. His neck was broken and his thorax damaged by the engine of the airplane. He died a few moments later, a few hundred feet from where the Vin Fiz ended its transcontinental flight. The aircraft in this last flight was the spare Model B
Wright Model B
|-See also:-References:* * * * * * -External links:* *...
he had carried in the special train during the transcontinental flight, rather than the "Vin Fiz". The "Vin Fiz" itself was later given to the Smithsonian Institution
Smithsonian Institution
The Smithsonian Institution is an educational and research institute and associated museum complex, administered and funded by the government of the United States and by funds from its endowment, contributions, and profits from its retail operations, concessions, licensing activities, and magazines...
by Calbraith's widow, Mabel Rodgers. He was the 127th airplane fatality since aviation began and the 22nd American aviator to die in an accident. He was also the first pilot who fatally crashed as a result of a bird strike
Bird strike
A bird strike—sometimes called birdstrike, avian ingestion , bird hit, or BASH —is a collision between an airborne animal and a man-made vehicle, especially aircraft...
.