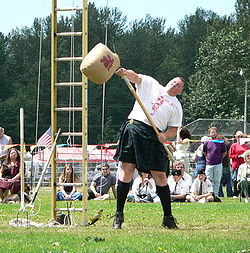 The sheaf toss is a traditional Scottish
Scotland
Scotland is a country that is part of the United Kingdom. Occupying the northern third of the island of Great Britain, it shares a border with England to the south and is bounded by the North Sea to the east, the Atlantic Ocean to the north and west, and the North Channel and Irish Sea to the...
agricultural
Agriculture
Agriculture is the cultivation of animals, plants, fungi and other life forms for food, fiber, and other products used to sustain life. Agriculture was the key implement in the rise of sedentary human civilization, whereby farming of domesticated species created food surpluses that nurtured the...
sport
Sport
A Sport is all forms of physical activity which, through casual or organised participation, aim to use, maintain or improve physical fitness and provide entertainment to participants. Sport may be competitive, where a winner or winners can be identified by objective means, and may require a degree...
event originally contested at country fairs. A pitchfork
Pitchfork
A pitchfork is an agricultural tool with a long handle and long, thin, widely separated pointed tines used to lift and pitch loose material, such as hay, leaves, grapes, dung or other agricultural materials. Pitchforks typically have two or three tines...
is used to hurl a burlap
Burlap
Hessian , or burlap in the US, is a woven fabric usually made from skin of the jute plant or sisal fibres, or may be combined with other vegetable fibres to make rope, nets, and similar products...
bag stuffed with straw
Straw
Straw is an agricultural by-product, the dry stalks of cereal plants, after the grain and chaff have been removed. Straw makes up about half of the yield of cereal crops such as barley, oats, rice, rye and wheat. It has many uses, including fuel, livestock bedding and fodder, thatching and...
over a horizontal bar above the competitor's head. Typical weight for the bag is 16 pounds
Pound (mass)
The pound or pound-mass is a unit of mass used in the Imperial, United States customary and other systems of measurement...
(about 7 kg
Kilogram
The kilogram or kilogramme , also known as the kilo, is the base unit of mass in the International System of Units and is defined as being equal to the mass of the International Prototype Kilogram , which is almost exactly equal to the mass of one liter of water...
). Three chances are given to each competitor to cleanly go over the bar, without touching it. After all challengers have made their attempts, the bar is raised and all successful competitors move on to the new height. This continues until all but one athlete is eliminated.

Sheaf tossing is also contested in Ireland
Ireland
Ireland is an island to the northwest of continental Europe. It is the third-largest island in Europe and the twentieth-largest island on Earth...
and Australia
Australia
Australia , officially the Commonwealth of Australia, is a country in the Southern Hemisphere comprising the mainland of the Australian continent, the island of Tasmania, and numerous smaller islands in the Indian and Pacific Oceans. It is the world's sixth-largest country by total area...
particularly at agricultural show
Agricultural show
An agricultural show is a public event showcasing the equipment, animals, sports and recreation associated with agriculture and animal husbandry. The largest comprise a livestock show , a trade fair, competitions, and entertainment...
s and at fair
Fair
A fair or fayre is a gathering of people to display or trade produce or other goods, to parade or display animals and often to enjoy associated carnival or funfair entertainment. It is normally of the essence of a fair that it is temporary; some last only an afternoon while others may ten weeks. ...
s; Irish sheaf tossing differs from sheaf tossing in Scotland and France in that the sheaf is made of rushes
Juncus
Juncus is a genus in the plant family Juncaceae. It consists of some 200 to 300 or more species of grassy plants commonly called rushes...
which are bound tightly with baling twine
Baler
A baler is a piece of farm machinery used to compress a cut and raked crop into compact bales that are easy to handle, transport and store...
and are not placed in a bag. The rules are the same as the Scottish version and a pitchfork
Pitchfork
A pitchfork is an agricultural tool with a long handle and long, thin, widely separated pointed tines used to lift and pitch loose material, such as hay, leaves, grapes, dung or other agricultural materials. Pitchforks typically have two or three tines...
is used. The same pitchfork is usually used for all competitors so as not to give anybody an unfair advantage by allowing them use their own customised pitchfork.